Clement of Alexandria on “Who is the rich man who will be saved?” on the Acton Blog.

The Age to Come Blog

Those who marry the spirit of this age will find themselves widows in the next. 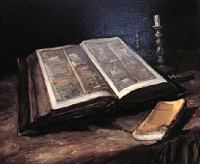 Above (left) is a reproduction of a painting by Vincent Van Gogh, which he composed in 1885. You will notice that there are two books. The larger of the two is the Bible. The other book is entitled: La joie de vivre (Joy of Life) by Emile Zola. Zola was the leading French novelist in the latter part of the 19th century. In 1884 he wrote La Joie De Vivre. It was part of a series of twenty novels he wrote rooted in a philosophical school called Naturalism. Zola helped establish this school.

Individual characters were seen as helpless products of heredity and environment, motivated by strong instinctual drives from within and harassed by social and economic pressures from without. As such, they had little will or responsibility for their fates, and the prognosis for their “cases” was pessimistic at the outset.

Ed. It’s the “Guardian” so make sure to read between the lines … Nevertheless, it’s an interesting article for several reasons: 1) it shows the internal rift still existing in Catholicism between liberationists (Marxism in Christian dress) and orthodox Catholics; 2) the war between Marx and religion in the person of Hugo Chavez (particularly the necessity of keeping the “colonial occupier” narrative alive to justify Marxism); 3) the difficulty Catholic intellectuals have with the concept of the Magisterium (subtle, but it’s there); and 4) the historical problem Catholicism faces because it tied its missionary endeavors too closely with national and commercial interests (Pope Benedict’s assertion that Catholicism contributed to the indigenous cultures is probably correct).

Pope Benedict was in trouble on two fronts yesterday, struggling to contain anger over remarks he made in Latin America and facing a revolt by former colleagues in Germany.
Following criticism of his views on the spread of Christianity in Latin America, the Pope acknowledged to pilgrims in Rome that “shadows” accompanied the conversion of indigenous groups. He said it was impossible “to forget the suffering [and] injustices inflicted by the colonisers on the indigenous population”.

APARECIDA, Brazil: Pope Benedict XVI’s first trip to Latin America has added to a sense, expressed recently by supporters and critics alike, that his papacy seemed to be moving closer to the mold that he embodied as Joseph Ratzinger, a conservative and contentious cardinal.

Religion matters more than ever in global affairs. But don’t count on the experts–or the State Department–to know that.

Speaking last December before journalists assembled by the Pew Forum on Religion and Public Life, Peter Berger had some explaining to do. Berger, an emeritus professor at Boston University, is a rightly esteemed sociologist of religion. “We live in an age of overwhelming religious globalization,” he began. But, as late as a quarter-century ago, neither he nor most other academics saw it coming. Most analysts, he explained, had the same stale orthodoxy about religion’s inevitable demise. “The idea was very simple: the more modernity, the less religion. . . . I think it was wrong.”

Their titles sound so confident:

• The Atheist Manifesto: The Case Against Christianity, Judaism and Islam by Michel Onfray.

ROME, APRIL 30, 2007 (Zenit.org).- The blood of martyrs continues to be shed in Turkey. The April 18 killing of two Turks and a German at a Christian publishing house in Malatya, in eastern Turkey, renewed concerns over the fate of Christians in the country. The three victims were found with their hands and legs bound and their throats slit.

A sectarian split among atheists.

A recent Associated Press story, headlined “Atheists Split on How Not to Believe,” has set fingers tapping throughout the blogosphere. The gist of the story as I read it is that there are soft atheists and fundamentalist atheists, and the softies are concerned that the fundies are becoming too outspoken, too uppity, indeed that they are giving unbelievers a bad name–a good trick that, like trying to give a bad name to an oil slick.

The wave of new conversions makes it difficult to find sufficient godparents. In the interim of the Pope’s long awaited letter to China’s Catholics, the Patriotic Association’s iron fist is felt, particularly in Hebei and Zhejiang.

Beijing (AsiaNews) – Thousands of people were baptised into the faith in Catholic churches across China on Easter night. Yet in some areas the underground Church is still subjected to persecution and imprisonment.

With the arrival of the eight day Passover Festival on Monday night, I was preparing some material for our family-reunion Seder meal (Diane and I will be together with all three of our children, plus my visiting father from Jerusalem) when I stumbled across one of the most important of all verses in the Hebrew Scriptures.

“In America religion is the road to knowledge, and the observance of the divine laws leads man to civil freedom” Alexis de Tocqueville Democracy in America.

Radical proposals to reunite Anglicans with the Roman Catholic Church under the leadership of the Pope are to be published this year, The Times has learnt.

The proposals have been agreed by senior bishops of both churches.

Ed. This is what the hard left wants in America.

Domination of church by state

Canada’s ideological left, confident of its control of academe, the Supreme Court and the federal Liberal Party, appeared this month ready to declare war on its most formidable enemy of all, namely conservative Christian churches that refuse to make their teachings conform to the Charter of Rights and Freedoms as defined by the Supreme Court.

Modern atheists have no new arguments, and they lack their forebears’ charm.

When the very first population of atheists roamed the earth in the Victorian age–brought to life by Lyell’s “Principles of Geology,” Darwin’s “Origin of Species” and other blows to religious certainty–it was the personal dimension of atheism that others found distressing. How could an atheist’s oath of allegiance to the queen be trusted? It couldn’t–so an atheist was not allowed to take a seat in Parliament. How could an atheist, unconstrained by a fear of eternal punishment, be held accountable to social norms of behavior? Worse than heretical, atheism was not respectable.

Are conservatives and Christians becoming too narrow and selfish? Are we hypocritical skinflints, indifferent to the suffering of the needy?

The liberals say so. But is it true? Do conservatives and Christians really love their money more than they do the poor?

A new book by an expert on charity says: absolutely not. The real skinflints, he writes, are secular liberals.