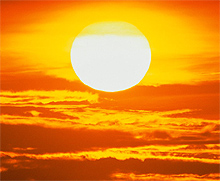 The research, published with little fanfare this week in the prestigious journal Nature, comes from über-prestigious CERN, the European Organization for Nuclear Research, one of the world’s largest centres for scientific research involving 60 countries and 8,000 scientists at more than 600 universities and national laboratories. CERN is the organization that invented the World Wide Web, that built the multi-billion dollar Large Hadron Collider, and that has now built a pristinely clean stainless steel chamber that precisely recreated the Earth’s atmosphere. [Read more…]

by Gilbert Ross, M.D. –
The last weekend in April saw the confluence of Earth Day and World Malaria Day. The very first Earth Day back in 1970 found many of us devoted to saving the world from polluting corporations and their toxic smog. And in fact, over the course of the next two decades or so, major strides were made in cleaning up our air and water. The sky over Los Angeles was even seen to be blue on occasion, and Hudson River fish were pronounced safe to eat again.

The momentum flowing from the first Earth Day led to the establishment of the Environmental Protection Agency (EPA) that same year. Its first administrator, William Ruckelshaus, was appointed fresh out of an environmental advocacy nonprofit, whose agenda included banning the insecticide DDT.

DDT had become the poster child target of the nascent environmental movement, thanks to Rachel Carson’s Silent Spring, published in 1962. Ruckelshaus — ignoring the voluminous testimony of his own scientific advisors demonstrating the unique effectiveness and lack of toxicity of DDT — signed the DDT ban in June 1972. He may as well have signed the death warrant for millions of victims of malaria and other insect-borne diseases. [Read more…] 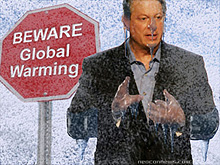 IBD – Nothing makes fools of more people than trying to predict the weather. Whether in Los Angeles or London, recent predictions have gone crazily awry. Global warming? How about mini ice age?

The sight of confused and angry travelers stuck in airports across Europe because of an arctic freeze that has settled across the continent isn’t funny. Sadly, they’ve been told for more than a decade now that such a thing was an impossibility — that global warming was inevitable, and couldn’t be reversed.

This is a big problem for those who see human-caused global warming as an irreversible result of the Industrial Revolution’s reliance on carbon-based fuels. Based on global warming theory — and according to official weather forecasts made earlier in the year — this winter should be warm and dry. It’s anything but. Ice and snow cover vast parts of both Europe and North America, in one of the coldest Decembers in history. [Read more…]

When your cockamamie theory is collapsing around you, it’s probably best to take your plight to a higher power. But if that isn’t possible, a fake jaguar goddess could work.

Christiana Figueres, executive secretary of the U.N. Framework Convention on Climate Change, invoked the ancient jaguar goddess Ixchel in her opening statement to delegates gathered in Cancun, Mexico, noting that Ixchel was … “the goddess of reason, creativity and weaving.”

I’ll give this conglomeration of exploiting profiteers five stars when it comes to creativity. You can’t manipulate data to produce fatalistic scenes of New York City being overwhelmed by tidal waves and Yellowstone erupting into volcanic ash without having a robust imagination. But reason? I think that went out the window long before they started praying to a jaguar. [Read more…]

11/18/2010 – Jeffrey Folks –
There are several factors that contribute to a nation’s future prosperity. One of the most important is an efficient and dependable supply of energy. A modern economy cannot function without adequate energy sources to power its electrical grid, supply its industries, heat its offices and homes, and fuel its transportation needs.

These facts are self-apparent, even to the left, so why is the left attempting to hamstring every promising new source of energy available to America? I can think of only one reason: because the left, as its main objective, wishes to bring America to its knees. From the left’s point of view, America is an imperialist nation that for too long has had its way in the world. Thus, for the left, the only moral position is to undermine American power and wealth. In the environmental movement as it exists today, the left has found the perfect vehicle for its assault on American power. [Read more…]

11/5/2010 – S. Fred Singer –
There is a revolution coming that is likely to burst the green global warming bubble: the temperature trend used by the IPCC (the U.N.’s Intergovernmental Panel on Climate Change) to support their conclusion about anthropogenic global warming (AGW) is likely to turn out to be fake. The situation will become clear once Virginia’s attorney general, Kenneth Cuccinelli, obtains information now buried in e-mails at the University of Virginia. Or Hearings on Climategate by the U.S. Congress may uncover the “smoking gun” that demonstrates that the warming trend used by the IPCC does not really exist. [Read more…]

10/30/2010 – Chuck Rogér –
One of the heads of the Green Dragon has hissed again. Urged by the King Corn lobby, the EPA recently raised the limit on ethanol in gasoline from 10 to 15 percent, a change that will harm Americans and the environment. The environmental justice-obsessed agency is actually driving injustice that will profit farming conglomerates. The Obama administration’s corporatist soul is showing. 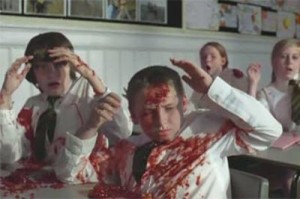 10/8/2010 – Michelle Malkin –
Halloween isn’t for another three weeks, but environmental ghouls are on the haunt. A sadistic video released by global warming fear-mongers reveals an inconvenient truth about eco-radicals: They despise the very children for whom they claim to be saving the planet.

In the opening scene of “No Pressure,” a four-minute short clip produced by carbon reduction activist group “10:10,” a teacher urges her elementary school charges to fight climate change by cutting their carbon emissions by 10 percent by Oct. 10. When a few uncooperative students object, the teacher (played by actress Gillian Anderson) presses a red button at her desk — which immediately detonates the nay-saying children. Their heads explode in graphic, bloody detail. Skin and body parts splatter all over their horrified classmates. [Read more…]

10/6/2010 – Chuck Rogér –
Humans have angered Mother Nature. Our species must stop multiplying, give up our addiction to huge-screen HDTVs, stop eating so many steer, and travel on twenty-pound electric tricycles forty miles at a time between charging stations. Otherwise, we are doomed.

This is a story about the ruling class promoting ruling class interests. Every year, scientists for sale compete for government grants to perform “research” that advances the human-caused global warming hoax. In order to keep the hoax alive, politicians must generate a steady supply of believers to conduct “research” as well as vote for said politicians, who keep the grants flowing. [Read more…]

WorldNetDaily | by Joseph Farah | 3/3/2010
Al Gore is nothing but a two-bit charlatan, but he is treated by the press establishment like a prophet, a courageous leader, a selfless crusader, a man of vision and ideals.

Which are you going to believe: Al Gore or your own eyes?

Forget what we in the United States and many around the world have experienced this winter, he writes in a New York Times op-ed. It may seem colder, but this is exactly what should be expected in a global-warming scenario, he claims. Just as a snowless winter in Washington a few years ago was also exactly what we should expect.

Al Gore is not a serious person. He’s a get-rich-quick artist who is peddling the biggest con game in the history of man. [Read more…]

Today’s global warming hysteria is the hoax of the 21st century. H.L. Mencken had it right: “The whole aim of practical politics is to keep the populace alarmed — and hence clamorous to be led to safety — by menacing it with an endless series of hobgoblins, all of them imaginary.” [Read more…]

Private industry and governments around the world have spent trillions of dollars in the name of saving our planet from manmade global warming. Academic institutions, think tanks and schools have altered their curricula and agenda to accommodate what was seen as the global warming “consensus.”

Mounting evidence suggests that claims of manmade global warming might turn out to be the greatest hoax in mankind’s history. Immune and hostile to the evidence, President Barack Obama’s administration and most of the U.S. Congress sides with Climate Czar Carol Browner, who says, “I’m sticking with the 2,500 scientists. These people have been studying this issue for a very long time and agree this problem is real.” [Read more…]

A few months after the hearings ended, EPA administrator William Ruckleshaus over-ruled his own agency and banned DDT anyway, in what he later admitted was a “political” decision. [Read more…]

In a rather stunning series of admissions, the suspended chief of the East Anglia CRU now admits that the warming seen in the late 20th century may not be unprecedented after all, that the planet has stopped warming for the last 15 years despite the predictions of AGW advocates, and that his own record-keeping has been poor. Phil Jones, who stepped down at least temporarily from his position at the CRU when its e-mails exposed a series of embarrassing attempts by climate scientists to undermine careers of skeptics and to hide contradictory data, now says that the entire basis of the “hockey stick” graph could have been invalid: [Read more…]

Unquestionably the world’s final authority on the subject, the Intergovernmental Panel on Climate Change’s findings and recommendations have formed the bedrock of literally every climate-related initiative worldwide for more than a decade. Likewise, virtually all such future endeavors — be they Kyoto II, domestic cap-and-tax, or EPA carbon regulation, would inexorably be built upon the credibility of the same U.N. panel’s “expert” counsel. But a glut of ongoing recent discoveries of systemic fraud has rocked that foundation, and the entire man-made global warming house of cards is now teetering on the verge of complete collapse. [Read more…]