Center for Science and Culture

Over 700 scientists since 2001 have stood against the establishment and proclaimed: “We are skeptical of claims for the ability of random mutation and natural selection to account for the complexity of life. Careful examination of the evidence for Darwinian theory should be encouraged.” The list is growing and includes scientists from the US National Academy of Sciences, Russian, Hungarian and Czech National Academies, as well as from universities such as Yale, Princeton, Stanford, MIT, UC Berkeley, UCLA, and others. [Read more…]

Ben Stein is known to many as an actor on Comedy Central. But the funniest part about his recent movie “Expelled” is not any clever lines spoken by Stein but the hysterical way liberals are trying to discourage people from seeing it.

Stein’s critics fail to effectively refute anything in “Expelled”; they just use epithets to ridicule it and hope they can make it go away. However, it won’t go away; even Scientific American, which labeled the movie “shameful,” concedes that it cannot be ignored. [Read more…]

Speaking at the White House, Pope Benedict XVI April 16 embraced America’s “quest for freedom….” Benedict explained: “Freedom is not only a gift, but also a summons to personal responsibility. Americans know this from experience – almost every town in this country has its monuments honoring those who sacrificed their lives in defense of freedom, both at home and abroad.”

Today, as in the Civil War, Logos is on the side of freedom. And in spite of the secular media effort to obfuscate, Benedict’s message couldn’t be clearer: Logos rises to defend against the secular call for submission to the Chaos unleashed by Islam. [Read more…]

We find that matter always obeys the same laws which our logic obeys. When logic says a thing must be so, Nature always agrees. No one can suppose that this can be due to a happy coincidence. [Read more…]

Q: How many materialists does it take to change a light bulb?
A: None. Given time the light bulb will change itself.

No joke. Light from darkness, life from non-life, mind from matter; it’s all a mere marvel of matter in motion. Never mind where matter came from, and no matter where mind came from, for matter-only materialists everything that is came unplanned from everything that was in a string of unguided eternal change. Magically transforming the mundane into the marvelous, it seems nothing is impossible with change–time makes light work of miracles. For the life sciences branch of materialist philosophy, Darwin’s theory mandates the same explanation for all life: unguided change over time gave us eyes to close and mouths to open in the service of a dead philosophy emanating from a brain that thinks it has a mind. Who would have thought? [Read more…]

William Dembski ID relies not on Genesis but on reliable scientific methods for discriminating designed from undesigned structures. Reprinted from The Design Revolution: Answering the Toughest Questions About Intelligent Design.

* There exists a supernatural agent who creates and orders the world.
* The biblical account of creation recorded in Genesis is scientifically accurate. [Read more…]

Everyone should take the opportunity to see “Expelled” — if nothing else, as a bracing antidote to the atheism-friendly culture of PC liberalism. But it’s far more than that. It’s a spotlight on the arrogance of this movement and its leaders, a spotlight on the choking intolerance of academia, and a spotlight on the ignorance of so many who say so much, yet know so very little. [Read more…] 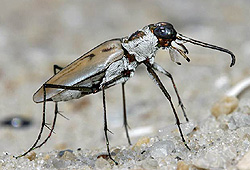 Evidence of more problems with the universal “macro-evolutionary” theory. It seems beetles are also exempt from evolution. They join the mighty cockroach, horseshoe crab, and many other species who stopped progressing millions of years ago.

Wait, don’t squash that beetle! Its lineage predates dinosaurs. New research hints that modern-day versions of the insects are far older than any tyrannosaur that trod the Earth. [Read more…]

WASHINGTON – Surprising research based on two African fossils suggests our family tree is more like a wayward bush with stubby branches, challenging what had been common thinking on how early humans evolved.

The discovery by Meave Leakey, a member of a famous family of paleontologists, shows that two species of early human ancestors lived at the same time in Kenya. That pokes holes in the chief theory of man’s early evolution — that one of those species evolved from the other.

ZANZIBAR, Tanzania – Fishermen have caught a rare and endangered fish, the coelacanth, off the coast of the Indian Ocean archipelago of Zanzibar, a researcher said on Monday.

The find makes Zanzibar the third place in Tanzania where fishermen have caught the coelacanth, a heavy-bodied, many-finned fish with a three-lobed tail that was thought extinct until it was caught in 1938 off the coast of South Africa. Since then two types of coelacanth have been caught in five other countries: Comoros, Indonesia, Kenya, Madagascar and Mozambique, according to African Coelacanth Ecosystem Program.