Observations of such structures led thinkers as diverse as Plato and Aristotle, Cicero and Maimonides, Boyle and Newton to conclude that behind the exquisite structures of the living world was a designing intelligence. As Newton wrote in his masterpiece The Opticks: “How came the Bodies of Animals to be contrived with so much Art, and for what ends were their several parts? Was the Eye contrived without Skill in Opticks, and the Ear without Knowledge of Sounds? . . . And these things being rightly dispatch’d, does it not appear from Phænomena that there is a Being incorporeal, living, intelligent . . . ?”

But with the advent of Darwin, modern science seemed able to explain this appearance of design as the product of a purely undirected process. In the Origin, Darwin argued that the striking appearance of design in living organisms—in particular, the way they are so well adapted to their environments—could be explained by natural selection working on random variations, a purely undirected process that nevertheless mimicked the powers of a designing intelligence. Since then the appearance of design in living things has been understood by most biologists to be an illusion—a powerfully suggestive illusion, but an illusion nonetheless. As Crick himself put it thirty-five years after he and Watson discerned the structure of DNA, biologists must “constantly keep in mind that what they see was not designed, but rather evolved.”

But due in large measure to Watson and Crick’s own discovery of the information-bearing properties of DNA, scientists have become increasingly and, in some quarters, acutely aware that there is at least one appearance of design in biology that may not yet have been adequately explained by natural selection or any other purely natural mechanism. Indeed, when Watson and Crick discovered the structure of DNA, they also discovered that DNA stores information using a four character chemical alphabet. Strings of precisely sequenced chemicals called nucleotide bases store and transmit the assembly instructions—the information—for building the crucial protein molecules and machines the cell needs to survive.

Crick later developed this idea in his famous “sequence hypothesis,” according to which the chemical parts of DNA (the nucleotide bases) function like letters in a written language or symbols in a computer code. Just as letters in an English sentence or digital characters in a computer program may convey information depending on their arrangement, so too do certain sequences of chemical bases along the spine of the DNA molecule convey precise instructions for building proteins. Like the precisely arranged zeros and ones in a computer program, the chemical bases in DNA convey information in virtue of their “specificity.” As Richard Dawkins notes, “The machine code of the genes is uncannily computer-like.” Software developer Bill Gates goes further: “DNA is like a computer program but far, far more advanced than any software ever created.” 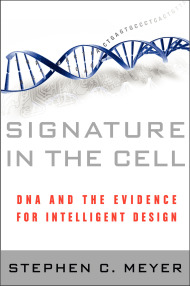 But if this is true, how did the information in DNA arise? Is this striking appearance of design the product of actual design or of a natural process that can mimic the powers of a designing intelligence? As it turns out, this question is related to a long-standing mystery in biology—the question of the origin of the first life. Indeed, since Watson and Crick’s discovery, scientists have increasingly come to understand the centrality of information to even the simplest living systems. DNA stores the assembly instructions for building the many crucial proteins and protein machines that service and maintain even the most primitive one-celled organisms. It follows that building a living cell in the first place requires assembly instructions stored in DNA or some equivalent molecule. As origin-of-life researcher Bernd-Olaf Küppers explains, “The problem of the origin of life is clearly basically equivalent to the problem of the origin of biological information.”

Much has been discovered in molecular and cell biology since Watson and Crick’s revolutionary discovery more than fifty years ago, but these discoveries have deepened rather than mitigated the enigma of DNA. Indeed, the problem of the origin of life (and the origin of the information needed to produce it) remains so vexing that Harvard University recently announced a $100 million research program to address it. When Watson and Crick discovered the structure and information bearing properties of DNA, they did indeed solve one mystery, namely, the secret of how the cell stores and transmits hereditary information. But they uncovered another mystery that remains with us to this day. This is the DNA enigma—the mystery of the origin of the information needed to build the first living organism.

In one respect, of course, the growing awareness of the reality of information within living things makes life seem more comprehensible. We live in a technological culture familiar with the utility of information. We buy information; we sell it; and we send it down wires. We devise machines to store and retrieve it. We pay programmers and writers to create it. And we enact laws to protect the “intellectual property” of those who do. Our actions show that we not only value information, but that we regard it as a real entity, on par with matter and energy.

That living systems also contain information and depend on it for their existence makes it possible for us to understand the function of biological organisms by reference to our own familiar technology. Biologists have also come to understand the utility of information, in particular, for the operation of living systems. After the early 1960s advances in the field of molecular biology made clear that the digital information in DNA was only part of a complex information-processing system, an advanced form of nanotechnology that mirrors and exceeds our own in its complexity, storage density, and logic of design. Over the last fifty years, biology has advanced as scientists have come to understand more about how information in the cell is stored, transferred, edited, and used to construct sophisticated machines and circuits made of proteins.