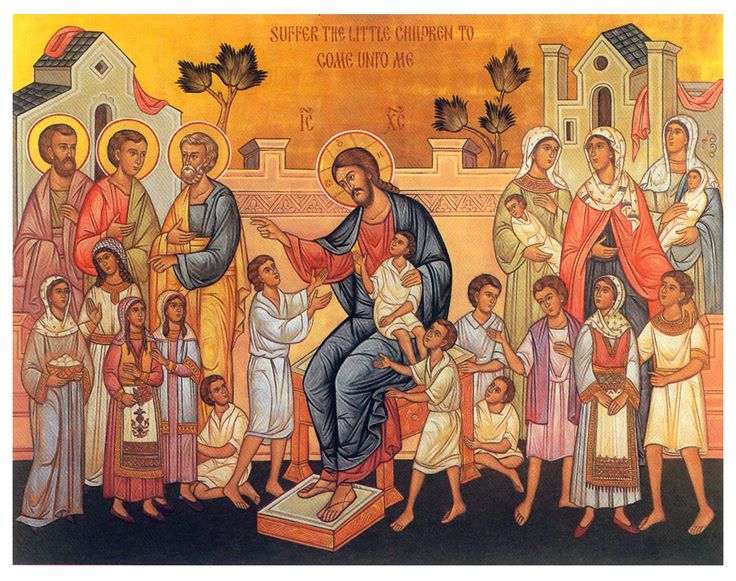 by St. John Chrysostom –
For let no one tell me that our children ought not to be occupied with these things; they ought not only to be occupied with them, but to be zealous about them only. And although on account of your infirmity I do not assert this, nor take them away from their worldly learning, just as I do not draw you either from your civil business; yet of these seven days I claim that you dedicate one to the common Lord of us all. For is it not a strange thing that we should bid our domestics slave for us all their time, and ourselves apportion not even a little of our leisure to God; and this too when all our service adds nothing to Him, (for the Godhead is incapable of want,) but turns out to our own advantage?

And yet when you take your children into the theaters, you allege neither their mathematical lessons, nor anything of the kind; but if it be required to gain or collect anything spiritual, you call the matter a waste of time. And how shall you not anger God, if you find leisure and assign a season for everything else, and yet think it a troublesome and unseasonable thing for your children to take in hand what relates to Him?

Do not so, brethren, do not so. It is this very age that most of all needs the hearing these things; for from its tenderness it readily stores up what is said; and what children hear is impressed as a seal on the wax of their minds. Besides, it is then that their life begins to incline to vice or virtue; and if from the very gates and portals one lead them away from iniquity, and guide them by the hand to the best road, he will fix them for the time to come in a sort of habit and nature, and they will not, even if they be willing, easily change for the worse, since this force of custom draws them to the performance of good actions. So that we shall see them become more worthy of respect than those who have grown old, and they will be more useful in civil matters, displaying in youth the qualities of the aged.

For, as I before said, it cannot be that they who enjoy the hearing of such things as these, and who are in the company of such an Apostle, should depart without receiving some great and remarkable advantage, be it man, woman, or youth, that partakes of this table. If we train by words the animals which we have, and so tame them, how much more shall we effect this with men by this spiritual teaching, when there is a wide difference between the remedy in each case, and the subject healed as well. For neither is there so much fierceness in us as in the brutes, since theirs is from nature, ours from choice; nor is the power of the words the same, for the power of the first is that of the human intellect, the power of the second is that of the might and grace of the Spirit.

Let then the man who despairs of himself consider the tame animals, and he shall no longer be thus affected; let him come continually to this house of healing, let him hear at all times the laws of the Spirit, and on retiring home let him write down in his mind the things which he has heard; so shall his hopes be good and his confidence great, as he feels his progress by experience.

when the devil sees the law of God written in the soul … he will not approach any more.

For when the devil sees the law of God written in the soul, and the heart become tablets to write it on, he will not approach any more. Since wherever the king’s writing is, not engraved on a pillar of brass, but stamped by the Holy Ghost on a mind loving God, and bright with abundant grace, that (evil one) will not be able even to look at it, but from afar will turn his back upon us. For nothing is so terrible to him and to the thoughts which are suggested by him as a mind careful about Divine matters, and a soul which ever hangs over this fountain. Such an one can nothing present annoy, even though it be displeasing; nothing puff up or make proud, even though it be favorable; but amidst all this storm and surge it will even enjoy a great calm.

2. For confusion arises within us, not from the nature of circumstances, but from the infirmity of our minds; for if we were thus affected by reason of what befalls us, then, (as we all sail the same sea, and it is impossible to escape waves and spray,) all men must needs be troubled; but if there are some who stand beyond the influence of the storm and the raging sea, then it is clear that it is not circumstances which make the storm, but the condition of our own mind. If therefore we so order the mind that it may bear all things contentedly, we shall have no storm nor even a ripple, but always a clear calm.

For we have contests against the enemies of the truth

After professing that I should say nothing on these points, I know not how I have been carried away into such a length of exhortation. Pardon my prolixity; for I fear, yes, I greatly fear lest this zeal of ours should ever become weaker. Did I feel confident respecting it, I would not now have said to you anything on these matters, since it is sufficient to make all things easy to you. But it is time in what follows to proceed to the matters proposed for consideration today; that you may not come weary to the contest.

For we have contests against the enemies of the truth, against those who use every artifice to destroy the honor of the Son of God, or rather their own. This remains for ever as it now is, nothing lessened by the blaspheming tongue, but they, by seeking eagerly to pull down Him whom they say they worship, fill their faces with shame and their souls with punishment.