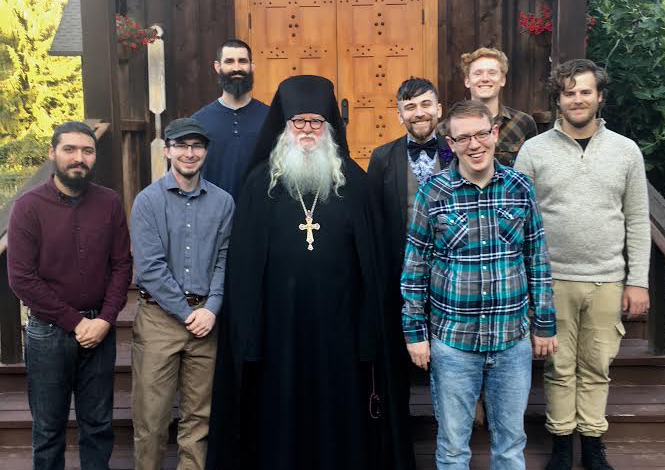 by Fr. Abbot Tryphon –
The summer months are coming to a close and many young people will be facing the prospect of heading off to college, some for the very first time. A scripture passage comes to my mind as I think of these wonderful young people preparing to leave home: “I am sending you out like sheep among wolves. Therefore be as shrewd as snakes and as innocent as doves (Matthew 10:16).” College professors almost universally enjoy challenging young college students to question authority, yet are taken aback when their own authority is questioned. They know they are addressing a class of impressionable minds and almost make sport of attacking the positions of their students.

My advice to Orthodox students is to refuse to be intimidated and don’t be discouraged. Most of these professors took years to acquire the knowledge and the skill to successfully defend their belief system, or lack thereof, including atheism. These professors usually only ask you to question the authority of those who have instructed you thus far, such as your parents or your religious leaders, but are highly indignant when someone questions their authority. Their pattern of teaching is nothing new, for there have been antagonists like them from before recorded history. Furthermore, their arguments are nothing new, for there were teachers of atheism and other false teachings who confronted the Apostle Paul when he was preaching the gospel in Athens. The arguments may be new to you, but suffice to know these challenges to your faith have been answered by a great many apologists since the beginning of Christianity.

these pompous academics move to crush that which they themselves do not understand.

Textbooks, be they geared towards history, science, or philosophy, have always tended to expound anti-Christian viewpoints, and it is important to remember that publishing companies produce textbooks that will sell to such academic mindsets. Christianity may be ridiculed as being closed minded and backward looking, but academics can not claim to be insulated from the same unhealthy trait. Some of the most closed minded individuals I have ever known were academics. I find it interesting that Christian writers expounding the Christian Faith are often accused of being biased, while secularists thinkers expose their own arrogance, hypocrisy and narrow mindedness, disallowing others their freedom of opinion. Dismissing the faith of young people, these pompous academics move to crush that which they themselves do not understand.

don’t be embarrassed by your commitment to your Orthodox faith

The best advice I can offer the young Orthodox Christian heading off to college is this: know from the moment you enter the classroom that the professor is a better debater than you, so don’t place yourself in his scope. If you do, expect to be blown out of the water. Secondly, don’t be embarrassed by your commitment to your Orthodox faith. My experience teaching on both secular and religious campuses is that most students are secretly wishing to find a spiritual basis for the meaning of life. They may secretly envy you for your faith. My final advice, “Be completely humble and gentle, be patient, bearing with one another in love (Ephesians 4:2).”

Build a support system for yourself by gathering together with other college students to form a chapter of the Orthodox Christian Fellowship. Meet on a weekly basis for worship, study, and networking. Get to know your faith to the degree that you can stand up to the best of them when defending your beliefs. If you do, you may one day be the reason an atheist professor finds Christ, and becomes an Orthodox Christian.

“Don’t let anyone look down on you because you are young, but set an example…in speech, in conduct, in love, in faith, and in purity.” (1 Timothy 4:12)

With love in Christ,
Abbot Tryphon