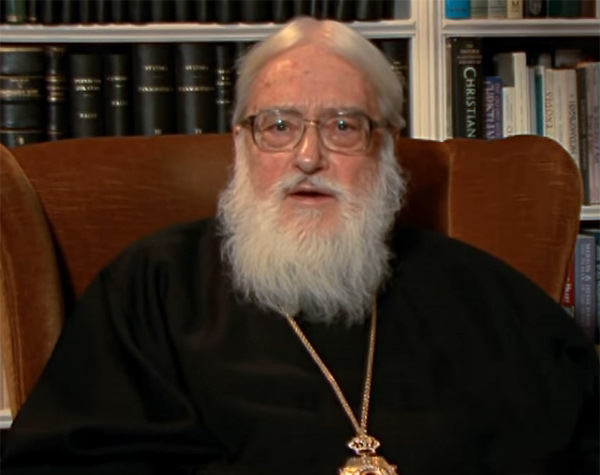 by Fr. Ioannes Apiarius –
Excerpts from an August 2, 2008 interview with Bishop Kallistos Ware published on VirtueOnline. Fr. George Westhaver questioned Bishop Kallistos regarding the various topics discussed at the Lambeth Conference held in 2008. According to the Anglican Church, the Lambeth Conference “takes place approximately every ten years” and is attended by Anglican bishops from around the world and “presided over by the Archbishop of Canterbury” to address the issues of the day.

Among the topics raised were the issues regarding the ordination of women and the blessing of same-sex marriages by the Anglican Church, and the implications for the Orthodox and Catholic Churches.

Notice what Bp. Kallistos Ware said about the ordination of women to the priesthood and the blessing of same-sex marriages, and how he’s framing the issues. There is no disapproval on his part. He did not contradict the Anglican Church decisions, but expressed his desire for consensus among the various churches. In other words, he seemed untroubled by the immorality or wrongness of the Anglican positions, but concerned mostly that the Orthodox and Catholic Churches have not embraced them.

Notice also how he insinuated that the Anglican Church may have been guided by the “Holy Spirit” in embracing these heretical changes.

LAMBETH: Interview with the Most Rev. Kallistos Ware, Archbishop of Gt. Britain
www.virtueonline.org/lambeth-interview-most-rev-kallistos-ware-archbishop-gt-britain
8/2/2008

“So surely the Anglican Communion cannot decide the question of the ordination of women to the priesthood or episcopate in isolation. Nor the question of the possibility of blessing of same-sex marriages. Surely that must involve a consensus of the total Body.

The Anglican Communion cannot settle this without bearing in mind its bonds with the wider communion of the Church – the Orthodox and the Roman Catholics. And that is one thing, I think, that troubles us very much as Orthodox, as it troubles the Roman Catholics. We feel that the Anglican Church, on these matters which are of basic importance, has acted alone, without catholic consensus. So I would have wished that the Windsor Report had put more emphasis upon communion meaning the total Body, not just the Anglican Communion. That I see as a limitation in its perspective.

I’ve spoken about the need for catholic consensus on issues like the ordination of women or the blessing of homosexual relations. These are departures from Church order and from accepted moral teaching of major importance, and therefore there ought to be some consensus not just within the Anglican Communion but with the other Churches, especially those that preserve the historic apostolic faith and order, the Roman Catholics and the Orthodox. That is one side of the matter, the need for consensus.

But then we might also say, should there not also be the possibility for a prophetic action? Will you ever have change unless some people are willing to stand up and say, this is what we ought to be doing? And even if their testimony is highly controversial, who will nonetheless stand by their position.

It could be argued that perhaps the Anglican Communion was guided by the Holy Spirit to lead other Christians into new paths. Now I can see that as a valid argument and I want to balance that against the point that we need to act with catholic consensus.

How can we do both these things together – preserve catholic consensus, and yet allow grace for freedom in the Holy Spirit? Christ did not tell us that nothing should never be done for the first time. The whole witness of the early Church points in a different direction.

So how do you balance these two things – the need for consensus with the need for freedom in the Spirit, the need for loyalty to holy tradition, with the need to be open to new initiatives? And I think this is at the heart of a great deal of what we are talking about here in Canterbury at this Lambeth Conference.” — Bishop Kallistos Ware

4 thoughts on “Met. Kallistos Ware on the Ordination of Women and Blessing of Same-Sex Marriages”