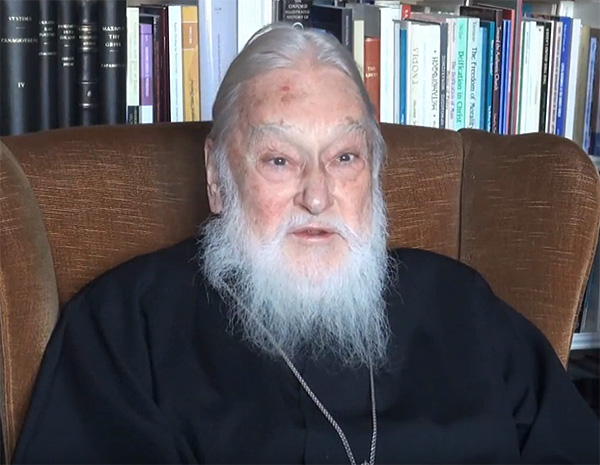 by Fr. Ioannes Apiarius –
In the latest issue of The Wheel magazine (edited by notorious pro-homosexual activist Inga Leonova and other pro-LGBT activists) Bishop Kallistos Ware bemoans the unfair and “heavy burden” the Orthodox Church places on homosexuals and criticizes the “defensive and reactive” manner in which the Orthodox Faith deals with homosexual sin.

But homosexuals have no such option. In the words of Vasileios Thermos, “A homosexual subject is called to lead a celibate life without feeling a vocation for it.” Are we right to impose this heavy burden on the homosexual?

Ware also writes that monogamous sodomy by homosexuals “committed to a permanent relationship” is preferable to promiscuity and hence the Church should make a distinction in how it treats such “married” couples:

A second anomaly is to be found in the way homosexuals are commonly treated in the sacrament of confession. All of us recognize that there is an important distinction to be made between those homosexuals who engage in casual encounters, seeking out in some “gay” bar a partner for a single night; and on the other hand, those homosexuals who are committed to a permanent relationship, faithful and monogamous, in which deep love is involved. Surely no Christian is in favour of sexual promiscuity.
…
What happens, by contrast, to the faithful and monogamous homosexual? Perhaps the priest says in confession, “Are you willing to give up your homosexual relationship?” The penitent may answer, “I cannot do that.” The priest may rejoin, “You can continue to share a common life, marked by mutual affection; but will you abstain from further sexual activity?” The other may well reply, “I am not yet ready to undertake that.” (Yet I have known homosexuals who have indeed transformed their relationship in this way.)

The priest, faced with this refusal, may well feel that he cannot bless the penitent to receive the sacrament. Now here certainly is a paradox. The homosexual committed to a stable and loving relationship is treated more harshly than the homosexual who is casual and promiscuous, and who is seeking not true love but passing pleasure. Something has gone wrong here.

Furthermore, Ware criticizes the Church for being obsessed with “genital sex” and accuses Orthodox priests of being Peeping Toms if they are concerned about homosexual activity between same-sex individuals:

Why do we put so great an emphasis upon genital sex? Why do we seek to enquire what adult persons of the same sex are doing in the privacy of their bedrooms? Trying to gaze through the keyhole is never a dignified posture. What harm are they doing to others? (“Ah!” it will be said, “they are doing harm to themselves.”) I am not suggesting here that we should bluntly set aside the traditional Orthodox teaching, but we do need to enquire more rigorously into the reasons that lie behind it.

Finally, Ware blames the Orthodox for being “defensive and reactive” and admonishes them to “experiment” in order to find “truth” and discover more “theological treasury” that apparently remains undiscovered regarding homosexuality:

In the words of Brandon Gallaher, “To ascertain the truth we must experiment.” And as Vasileios Thermos maintains, “Our theological treasury . . . is waiting to be discovered.” Let us not as Orthodox be merely defensive and reactive, “running after the facts,” as he puts it; but let us listen to one another with creative courage, with mutual respect and, more than that, with (in his own words again) “loving compassion.” Let us acknowledge, moreover, the variety of paths that God calls us human beings to follow.

63 thoughts on “Met. Kallistos Ware Comes Out for Homosexual “Marriage””