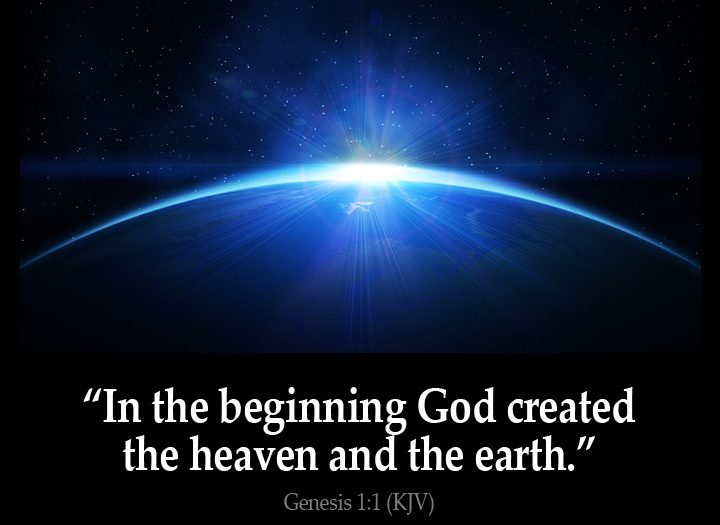 by Fr. Patrick Henry Reardon –
The opening chapter of Genesis has long been a favorite of Christians, and ancient commentators discovered in its lines profound levels of meaning.

In more recent times, on the other hand, some readers of Genesis, distracted by apologetic concerns alien to the deeper interests of the Sacred Text, have failed to discover those depths. For example, even from boyhood I recall that some of my teachers were preoccupied with the length of the six “days” of Creation. Was it really necessary, they asked, to think of those “days” in the sense of having twenty-four hours? Might they not, instead, represent long periods of Natural History?

No, this is certainly not what the biblical author has in mind. The problem with such questions is that they distract the mind from the deeper message of the Sacred Text. To ask, “how long” these days of Creation are is a distraction. Genesis does not picture the earth as a ball spinning in space. Genesis 1 is not an exercise in Natural History.

Indeed, this is partly the point. In Genesis the setting and rising of the sun are not what determine day and night. With respect to Day One (yom ‘ehad) of Creation we are told, “there was evening and morning,” even though the sun itself had not yet been formed. How can there be evening and morning without a sun? For the Bible that is obviously not a problem. To make it a problem is a distraction.

To foreswear the light of truth is the death of all knowledge.

God created the light three days before He created any of the heavenly bodies. Light and darkness in the Creation story exist independent of the sun or anything else. Day and night are simply the names of light and darkness: “God called the light Day, and the darkness He called Night.”

It is important to note that Genesis does not say that God created darkness; darkness was, so to speak, already there. Darkness is nothingness; the night is vestigial non-existence. This is why the Bible’s final book tells us, with respect to heaven, “There shall be no night there” (Revelation 22:5).

Light, on the other hand, is the first thought of God; “Let there be light”

Light, on the other hand, is the first thought of God; “Let there be light” are His first recorded words. The light in Genesis is not a by-product of solar energy. It is, rather, the principle of intelligibility in the structure of Creation. The light that God calls into being at the beginning of Genesis is that inner form of meaning that the mind of man, in due course, will be created to discover and investigate.

For much of the modern world, these biblical ideas make no sense at all. The modern world, or at least a great deal of it, does not know that the world is an intelligible place. According to the modern view, intelligibility is not a characteristic of the world itself, but only of the human mind. Modern man thinks he is supposed to “make sense” of the world, not discover a sense that is already there.

The modern world logically reaches this conclusion because it no longer believes in Creation.

The modern world logically reaches this conclusion because it no longer believes in Creation. Instead, the existence of the universe is explained (!) as the random result of physical forces. The modern world knows nothing of “why?” but only “how?” The universe, accordingly, defies a “why” and has only a “how?” That is to say, it has no light except physical light. It has no intrinsic intelligibility, because intelligibility, or “sense,” implies knowable structure, or form (morphe).

A “random” world is a world without intelligible structure.

loss of the light does not leave the mind neutral. It leaves the mind in darkness

To repudiate the doctrine of Creation is, logically, to deny God’s first act, the calling forth of the light, which is the principle of truth. And here is where the teaching of Genesis becomes deadly serious, because the denial of the light is not just an individual denial. It is the ultimate denial. To foreswear the light of truth is the death of all knowledge.

The loss of the light does not leave the mind neutral. It leaves the mind in darkness, an existence forever outside of the truth. In this sense, modern man’s predicament is that of Judas Iscariot, of whom the Bible tells us, “Having received the piece of bread, he then went out immediately. And it was night” (John 13:30).

2 thoughts on “Let There Be Light: God, Not Random Forces, Created Our Universe”