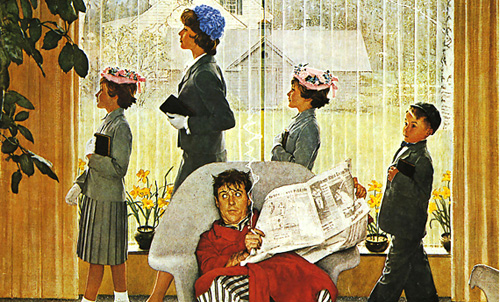 by Jared M. Silvey –
The Christian message is made more credible and powerful when integrated within the flow of our everyday actions. It is one thing to say something; it is another thing to do it.

St. Francis of Assisi is said to have once instructed his followers to “preach the Gospel at all times, and when necessary, use words.” Underlying this statement is the idea that the Christian message is made more credible and powerful when integrated within the flow of our everyday actions. It is one thing to say something; it is another thing to do it. A man may say that he loves his wife, but in the end it is what he does and is willing to go through for her that gives credence to his words.

Bishops, priests, and deacons are ordained with the authority to announce the Gospel to humanity. The laity are also called to proclaim Christ by their words, but they are also in a unique position to witness to Christ by their everyday actions. This is especially true given their close proximity to the secular world and the people therein.

In its decree on the apostolate of the laity, the Second Vatican Council noted that “Since the laity, in accordance with their state of life, live in the midst of the world and its concerns, they are called by God to exercise their apostolate in the world like leaven, with the ardor of the spirit of Christ.” The laity, then, are in a very real sense the face of the Church—or, to put it another way, the Church facing outward toward a world in need of redemption. This means that they must constantly strive to construct their daily existence in such a way as to give a fitting witness to the reality of the Church’s divine mission. Here are a few steps that can be taken to accomplish this goal.

1. Work to Restore a Lifestyle and Culture Which Respects and Reflects the Sacred Character of Sunday
The sacredness of the Christian Sabbath has long been a firm fixture in cultures built or purified by Christianity. In the not-so-distant past, it was common for shops and stores to close on Sunday. Catholics, and other Christians, went to church and spent the day among family and friends. Although many Western nations today still preserve vestiges of Sunday’s festal character, the sanctity and theological import of the day has generally been lost.

Why is this a day of such importance? As Saint John Paul II noted in his Apostolic Letter Dies Domini, the Resurrection, which happened on Sunday, is “the fundamental event upon which the Christian faith rests.” In other words, Sunday’s centrality in the arena of time directly corresponds to the Resurrection’s centrality in salvation history.

Because of this, taking seriously the obligation to honor the Sabbath carries with it a witness to the reality of the deepest truths of Christianity. By doing what he or she can to honor the Sabbath, the layperson is in a real way evangelizing the world by (1) Witnessing to the primacy of God over money and human work. (2) When spent with the family, Sunday shows the primacy of the family over other forms of social relations. (3) Sunday frees Christians from the monotony of temporal existence in order that they may turn their gaze to their ultimate destiny.

As Saint John Paul II said, again in Dies Domini, “As the Church journeys through time, the reference to Christ’s Resurrection and the weekly recurrence of this solemn memorial help to remind us of the pilgrim and eschatological character of the People of God. Sunday after Sunday the Church moves towards the final “Lord’s Day,” that Sunday which knows no end.”

Therefore, while it is true that modern circumstances sometimes leave the sincere Catholic with little choice but to work on Sundays, an examination of conscience is due in order to determine what can be done to help reclaim the sacred Sabbath rest given by the Creator.

By dressing modestly -even if at time counter-culturally- the Christian provides a powerful witness to the reality of the sacredness of the body.

2. Choose Clothing Styles That Both Guard and Reveal Human Dignity
It is often asserted that one cannot judge a person by what he or she wears. In a certain sense this is correct, as only God can see the true state of someone’s soul. Nevertheless, clothes do matter and are a way of communicating to others. During the course of recent history, the clothing industry has increasingly tailored its output to communicate one thing—sex. In Christianity, sex is a value, but one which is subject to the value of the person made in the image of God. Modern fashion has reversed this relationship, subjecting the person and his or her divine imprint to “sex appeal.” This has led to a debasing of the human person to the level of a mere object. Bikinis, mini-skirts, skin-tight clothing, and low neck-lines are all examples of the industry’s attempt to create a culture of enticement and sexual promiscuity. Anyone who doubts this need only consult any marketing department.

Those who try to live the virtue of modesty are often accused of debasing the body and of treating the flesh as if it were evil. It is certainly true that heretical Christians in past ages viewed the body as evil. But authentic Church teaching is not Manichaean. Modesty is a virtue not because the body is evil, but on the contrary because it is good and sacred. God Himself is the author of the human body. The need for modesty stems from the fact that after the fall human nature became infected with concupiscence, or disordered inclinations, which gave rise to disordered sexual desires. Therefore, there are two realities which need to be accounted for: the reality of the goodness of the body and the reality of fallen man. Modesty takes a realistic approach by recognizing the reality of this inclination to lust, and so takes steps to guard the body and so affirm its goodness and holiness. By dressing modestly—even if at time counter-culturally—the Christian provides a powerful witness to the reality of the sacredness of the body.

3. Step It Up for Sunday Mass
Clothes have also traditionally been a means to communicate the importance attached to certain events. A family barbeque is a casual, relaxed enterprise, and so people dress accordingly. A funeral, on the other hand, is a life-changing, sorrowful event, and so the respective attire is formal and somber. In the liturgy, the priest wears different vestments depending on the solemnity of the feast. Clothing does matter, and communicates much.

It used to be common for the laity to dress formally for Sunday Mass. Many photos and video footage from the first half of the twentieth century attest to this. During the past half-century or so, the atmosphere has become much more casual. This lax attitude reflected in the Sunday attire of many Catholics is reflective of the informal disposition of the modern churchgoer toward the liturgy itself. This means that the laity have a powerful opportunity to discourage this casual relationship to the liturgy by taking the time to dress suitably for Mass. This gives a powerful indicator that Sunday is no ordinary day, and that it is no ordinary thing happening on the altar.

Charity demands that Christians guard their tongue against foul language

4. Baptize One’s Speech
Charity demands that Christians guard their tongue against foul language, and the Second Commandment forbids the misuse of the Lord’s name. Both of these guidelines are violated on a daily basis by both Catholics and non-Catholics alike. This reality is coupled with a large-scale resignation to the proliferation of swearing and blasphemy in modern media.

If it is true that actions often speak louder than words, it is also true that the very absence of words at times speaks volumes. Swearing and foul language have become such a staple of human society that when someone refuses to speak in such a manner, people notice. At times, they may even start to become apologetic for their own language. Human speech is meant to serve as a vehicle of truth and love, and working to regain this original end of language is a powerful witness to the reality of the moral order and to the dignity of the human person.

5. Work to Restore Family Life to the Center of Society and Culture
In Catholic social teaching, the family is the fundamental unit upon which society rests. In the natural order, the family bond is the strongest and most important of all human ties. Part of the reason that successful societies have flourished throughout history is that the family was given pride of place. Societies that have not respected this reality have given way to decay. The breakdown of the moral and social fabric in the Western world by way of contraception, abortion, divorce, absent fathers, and the failure of parents to give their children a sound, moral education all attest to this fact.

What can the Catholic family do to give witness to this sacred centrality? The best way is nothing more than to actually be a family. This may sound simple, but the fact is that patterns of life today leave little time for a family to be a family. Restoring the family meal, taking time to pray together, and cutting the time spent on social media can go a long way (it is a problem when family members living together know more about each other through Facebook statuses than through talking). Such a sense of holy unity is a powerful witness to a broken world hungering for love.

To conclude with a quote from St. John Paul II’s Letter to Families “Created in the image and likeness of God, man cannot fully ‘find himself’ except through the sincere gift of self. Without such a concept of man, of the person and the ‘communion of persons’ in the family, there can be no civilization of love.”

Editor’s note: The image above titled “Easter Morning” was painted by Norman Rockwell in 1959 for the Saturday Evening Post.