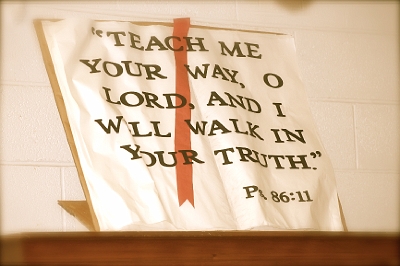 by Stephen Turley –
If Christians are to remain faithful to the biblical Gospel, we must once again affirm the public witness of the church, particularly in the field of education. For such an affirmation not only awakens the soul to the True, the Good, and the Beautiful, but in embodying the Truth, it exposes the state-financed educational system which denies Truth as what it is: a lie.

The emergence of classical Christian education over the last few decades has thrown into relief the question of the relationship between public education and Christian witness. With ninety-percent of children in the U.S. attending public schools, the modern pulpit appears generally indifferent on the issue of private vs. public education for its parishioners; indeed, one might say pastors are generally supportive of public education.

Perhaps the most common rationale for such support is that Christian students have the opportunity–indeed, the obligation–to be “salt and light”, to be “in but not of’ the world”. But what does a faithful Christian witness in public life demand of us when it comes to schooling?

All Education is Public
It is essential to understand that the public-private school dichotomy which prevails in our social arrangements and discourse is extremely misleading. This is because all education is public: all education seeks to cultivate within students an appreciation of shared values that constitute the common good of a community. There is simply no such thing as an education that is entirely private.

There is, however, education that is coercively funded and non-coercively funded; an education system that depends on the compulsory nature of the state versus one that depends on the voluntary tuition paid by willing participants. The real question, then, that emerges is not whether we are going to support public education, but whether we are going to support the kind of public promoted by state-financed education.

In a word, the defining attribute of that public order perpetuated by state-funded education is secular. It is claimed that a secular society is one that neither favors not discriminates against any particular religion. Religion and politics simply do not mix in a modern secular society. While variant religions remain highly significant for people, this significance is maintained and expressed in the private sphere of life. By privatizing faith, it is suggested that all peoples are able to participate equally in economic, political, and sociological life without religious discrimination. And tax-funded schools, as an extension of this vision of the public, have carved out neutral space so as to allow people of all religions to come together and learn facts and data common to everyone.

What if religion has been redefined by the very institution that claims to “protect” it?

Now, this certainly sounds reasonable. The public promoted and perpetuated by the secular state neither favors nor discriminates against any particular religion. But what if it turns out that it was in fact the secular state that redefined religion this way? What if our understanding of faith and religion as that which belongs in one’s private life rather than in the public square is itself the social invention of the secular state? What if religion has been redefined by the very institution that claims to “protect” it?

Classical Christianity
In contrast to our modern religious sensibilities, classical Christianity understood the church as offering to the world an alternative public distinct from that offered by the Jewish and Greco-Roman worlds. The church was a civilization, the city-state of the New Jerusalem. In fact, Augustine goes so far as to call the church a ‘republic’ in his City of God. Indeed, the term ekklesia, the Greek word for ‘church’, was not what we would call today a ‘religious term’ such as thiasos (worship of a particular deity); ekklesia was in fact a political term that designated the assembly of adult citizen males who had the ultimate decision making power in a city-state.

the Gospel was instead a declaration announcing that the entire cosmos has been incorporated into Christ’s transformative life, death, and resurrection

Hence, the Gospel was not a promise of personal and private salvation; the Gospel was instead a declaration announcing that the entire cosmos has been incorporated into Christ’s transformative life, death, and resurrection, which was expressed in shared life: mutuality, self-giving, and fellowship. As such, the ‘truth of the Gospel’ was considered a thoroughly public truth. Truth was not merely personal persuasion; truth was in fact a revelation of reality which was socially recognized as absolute and unquestionable.

By the 3rd-century, educational institutions were considered integral to this public witness of the church. In cities such as Alexandria and Antioch, Christian education adopted the frames of reference of classical education which sought to cultivate within the student a sense of what classical scholars call ‘cosmic piety’: every person born into the world is born into a world of divine obligation.

Classical education thus sought to instill within students the transcendent values embedded in the created order, namely, the True, the Good, and the Beautiful as they configured around Christ the Logos.

Classical Christian Education
Classical education thus sought to instill within students the transcendent values embedded in the created order, namely, the True, the Good, and the Beautiful as they configured around Christ the Logos. It was believed that by embodying these cosmic values, students cultivated a virtuous soul. Classical Christian education was therefore a project by which the student was initiated into a public order that materialized or substantiated a cosmic piety, which in turn enabled the student to fulfill his or her divine purpose and thereby become truly human. This vision of education remained normative up to the end of the 19th-century.

Modern Education
However, by the beginning of the 20th-century, things had changed rather dramatically. A few centuries earlier, the Treaty of Westphalia in effect consigned the church to an organ of the state, which concentrated unprecedented power around local regents. As nation-states started to emerge in Europe, the burden on universities was to produce more civil servants than clergy, a process that Perry Glanzer has labeled the “nationalization of the universities”. This transformation of the university into a servant of the nation-state led to a redefinition of knowledge that privileged science at the exclusion of the church. Consequently, there emerged a whole new definition of religion: religion was no longer a public expression of cosmic piety and social obligation. Instead, religion was simply something that one personally believed but could not know; it was that by which one cultivated a sense of private meaning and existential satisfaction, but religion had no public, that is objective, value at all.

With the advent of the industrial revolution in the 19th-century and social democracies throughout Europe after World War I, there is in effect a massive recalibration of the totality of social and economic life around the state. And it is here that secularism plays a key role, for it is through secularization that the state is able to perpetuate and protect its monopolization over the public square. And the primary mechanism by which such monopolization is maintained is the redefinition of religion and the consequent marginalization of the church to the private sphere of life. The state effectively marginalizes the church (or any other competing vision of the public) by re-inventing our conception of faith and religion in accordance with secular norms: faith and religion are little more than instrumental means by which individuals find personal meaning and purpose for their lives.

state-funded education perpetuates and promotes the secularization of society

Modern Secular State Monopolizes the Public Square
Hence, the role of education in a public defined by secular norms is to maintain the state’s monopolization over the public square by perpetuating a dichotomy between the public and the private, science and religion, fact and faith, knowledge and belief; in short, state-funded education perpetuates and promotes the secularization of society. It is this public-private dichotomy that is profoundly detrimental to the witness of the church, for it in effect denies the church its distinctly public witness.

the practice of being “salt and light” is reduced to little more than anecdotes of personal persuasion.

The church’s unique vision for a humane society is reduced to merely one of innumerable options for private recreation: yoga class on Saturday, youth group on Sunday. Because the church has been consigned to private belief rather than public knowledge, it has been stripped of the distinctly public frames of reference by which its truth claims are demonstrated to be more trustworthy than any other competing private belief. Consequentially, objective Christian commitments embodied in the shared life of the church collapse, and the integrity of the Gospel is inexorably compromised. Hence, the practice of being “salt and light” is reduced to little more than anecdotes of personal persuasion.

Moreover, by insisting upon this dichotomy between science and religion, modern education must by definition turn students away from the classical vision of cosmic piety, cutting them off from encountering the cosmic values of the True, Good, and Beautiful. Indeed, today, both in our schools and wider society, the True, Good, and Beautiful are now whatever one wants them to be. There is simply no divine obligation apart from that which each person chooses to impose upon himself.

If Christians are to remain faithful to the biblical Gospel, we must once again affirm the public witness of the church, particularly in the field of education

Christians Must Affirm the Public Witness of the Church
If Christians are to remain faithful to the biblical Gospel, we must once again affirm the public witness of the church, particularly in the field of education. For such an affirmation not only awakens the soul to the True, the Good, and the Beautiful, but in embodying the Truth, it exposes the state-financed educational system which denies Truth as what it is: a lie.

We cannot teach our students that Truth is relative and expect our politicians to be honest; we can’t claim that the Good has been replaced by situational ethics and expect Wall Street executives to ground their business decisions in anything other than profit, greed, and expediency; and we cannot relegate Beauty to personal preference and then feign shock when we encounter a urinal as part of an art exhibit.

Christians will never expose this lie as long as they support and fund it. Classical Christian education offers nothing less than a parallel public, a revelation of Truth that in its social splendor awakens wonder and awe in teacher and student alike, as together they fellowship in Him who is the divine renewal of all things.