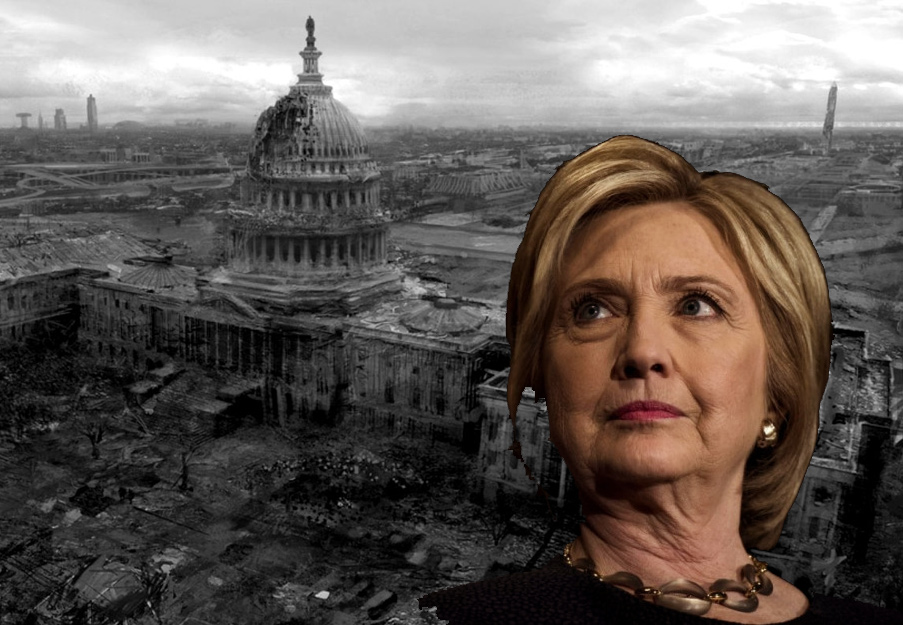 by Archpriest Alexander F.C. Webster –
In A Christmas Carol, a seasonal favorite that Charles Dickens wrote in 1843, the miserly misanthrope Ebenezer Scrooge is privileged, thanks to the silent, ominous Spirit of Christmas Yet to Come, to glimpse his miserable future and lonely demise. Before he turns to read the tombstone inscribed with his own name, Scrooge asks the specter with great trepidation, “Are these the shadows of the things that Will be, or are they shadows of things that May be, only?”

In view of the numerous overwrought displays of grief, disbelief, and even violent protests following the unexpected defeat of Hillary Rodham Clinton by President-Elect Donald J. Trump in the November election, I propose that we consider what might have been if the Democrat nominee had prevailed. What are the “shadows of things” that might have been?

On October 11, 2016, in a moment of “extreme carelessness” (like her email server scandal) or sheer hubris, Mrs. Clinton declared to Mark Leibovich of the New York Times, “As I’ve told people, . . . I’m the last thing standing between you and the apocalypse”. Mrs. Clinton was, as usual, mistaken. She would have been the “apocalypse,” politically speaking, of the American Republic.

A LITANY OF EVILS
In an article titled “Transfigure or Die Trying” in Touchstone in May / June 2015, I suggested that traditional religious communities in America were already under siege in a “post-Christian vortex that bears a striking resemblance in many ways to the formative centuries of the ancient Church.” In broad strokes, “militant secular progressives are hell-bent on subverting the cherished moral virtues of life, family, chastity, work, responsibility, and piety.” America “is drowning in a sea of idolatrous self-worship, pursuing a modern version of ‘bread and circuses’ through increasingly violent and vulgar forms of entertainment and self-expression, a permanent welfare state from cradle to grave, abortion on demand, unrestricted sex, artificially constructed sexual identities, and publicly sanctioned ‘marriages’ between persons of the same sex—a contra naturam abomination that even ancient Rome at its worst moments never imagined.”

The two-year national election campaign just concluded accelerated our spiritual and moral decline as a people. The coarsening of public discourse and private conversation is breathtaking and almost enough to drive one to despair. Pathological lying, lawlessness, and acts of malice and personal destruction are omnipresent among the political class, the mainstream media, and the cultural elites in the academy, Hollywood and the other entertainment industries, even professional sports.

Almost no component of our federal government is above political and moral corruption—from the White House to the Congress to the U.S. Supreme Court to the Department of Justice and the Federal Bureau of Investigation to the U.S. armed forces in which I served as an Orthodox chaplain for a quarter of a century until my retirement in 2010. Particularly ominous for traditional Christians in America are the increasing rhetorical, legal, and federal assaults on the religious freedom heretofore guaranteed to all Americans by the First Amendment to the U.S. Constitution.

In his dissenting opinion to the Supreme Court’s Obergefell v. Hodges decision in June 2015, Chief Justice John Roberts rang an alarm bell: “The majority graciously suggests that religious believers may continue to ‘advocate’ and ‘teach’ their views of marriage. . . The First Amendment guarantees, however, the freedom to ‘exercise’ religion. Ominously, that is not a word the majority uses. . . . Indeed, the Solicitor General candidly acknowledged that the tax exemptions of some religious institutions would be in question if they opposed same-sex marriage.”

As recently as September, 2016, Martin R. Castro, chairman of the U.S. Commission on Civil Rights, summarized a special report on religious freedom by that federal agency: “The phrases ‘religious liberty’ and ‘religious freedom’ will stand for nothing except hypocrisy so long as they remain code words for discrimination, intolerance, racism, sexism, homophobia, Islamophobia, Christian supremacy or any form of intolerance.”

In April 2015, Mrs. Clinton herself declared, “[F]ar too many women are still denied critical access to reproductive health care and safe childbirth. All the laws we’ve passed don’t count for much if they’re not enforced. Rights have to exist in practice, not just on paper. Laws have to be backed up with resources and political will. And deep-seated cultural codes, religious beliefs and structural biases have to be changed.” Mrs. Clinton’s use of passive voice in the last phrase (“have to be changed”), instead of the usual active infinitive one might expect (“have to change”), betrayed the authoritarian intent of a would-be despot.

THE WRATH OF CLINTON
And that brings us to what a President Hillary Rodham Clinton might have wrought, if she had defeated Donald J. Trump.

Mrs. Clinton’s use of passive voice in the last phrase (“have to be changed”), instead of the usual active infinitive one might expect (“have to change”), betrayed the authoritarian intent of a would-be despot.

Within her first 100 days in the White House—the standard for measuring the success of a new U.S. president—Mrs. Clinton would have undoubtedly begun to construct via proposed legislation, “executive orders,” or nominations and appointments a new socialist order with open borders and unrestricted immigration; all abortions—including “partial birth”—fully funded by the federal government; the transgenderization of all public bathrooms and locker rooms in all fifty states, including all government (“public”) schools; 50% quotas for women in federal hiring and appointments; a federal prohibition against “hate crime” speech that associates jihadist terrorism in any way with Islam, a “religion of peace”; a radical left-wing nominee for the U.S. Supreme Court bearing no semblance whatsoever to the late Justice Antonin Scalia, who interpreted the U.S. Constitution as a strict constructionist; needless provocations of the Russians owing to an obsessive anti-Putin animus but also rooted in hostility to the rebirth of the Russian Orthodox Church and the symbiotic resistance of Church and state in Russia to the West’s perverse crusade for “human rights” as viewed through secular progressive lenses; and other, unanticipated acts of foolishness and recklessness.

Most dire for Orthodox Christians, other traditional Christian communions (both Roman Catholic and Protestant), and the Orthodox and Hassidic Jewish denominations is the high probability that Mrs. Clinton would have, as President, issued an executive order unleashing the IRS to revoke the 501c3 federal tax exempt status of religious organizations that have not yielded to the new intolerant orthodoxy enforcing the LGBTetc. agenda. A gutting of the “free exercise” of religion enshrined in the First Amendment to the U.S. Constitution might have followed in the first year or two of President Clinton’s reign.

It is neither silly nor unrealistic also to have expected attempts by federal agencies, cheered on by a thoroughly corrupt mainstream media and an increasingly radicalized Democrat Party (both dominated by secular progressives), to discredit dissident churches and synagogues (though probably not mosques, for obvious reasons) and even close them and, perhaps, arrest and imprison dissident clergy on bogus charges of the violation of “human rights.” In a Hillary Clinton administration that modern political concept would have undoubtedly ballooned to include unchecked abortion and LGBTetc “rights.”

ROUSSEAU IN A TROUSSEAU
A self-described “progressive” but a totalitarian at heart, Mrs. Clinton, a protégé of the radical left-wing agitator Saul Alinsky dating from her senior thesis at Wellesley College, is, I would contend, a disciple of Jean-Jacques Rousseau, the political godfather of modern totalitarianism.

In the chapter “On Civil Religion” in his influential, prescient 1762 treatise, The Social Contract, the French philosopher allowed for religion as a reflection of the “General Will” (or collective “sovereign”) that must govern the citizens of a state [Jean-Jacques Rousseau, On the Social Contract, trans. By Donald A. Cress; Indianapolis: Hackett Publishing Company, 1987, p. 102]. But that “religion” must be “a purely civil profession of faith, the articles of which it belongs to the sovereign to establish, not exactly as dogmas of religion, but as sentiments of sociability, without which it is impossible to be a good citizen or a faithful subject.”

Rousseau enumerated those essential—and exclusive—“dogmas” as the “positive” concepts of (1) a powerful, personal, providential “divinity”; (2) an afterlife; (3) “happiness of the just” (but not everyone, to be sure); (4) “punishment of the wicked”; and (5) the “sanctity of the social contract and of the laws.” In addition, there was one “negative” dogma—the exclusion of “intolerance” in the pursuit of “tolerance.” Rousseau’s version of acceptable civil religion was little more than a very muscular Unitarianism.

To enforce the sole, national, civil religion Rousseau proposed two draconian measures adopted only a generation later by the Reign of Terror after the French Revolution and, eventually, by the worst totalitarian regimes—both fascist and communist—in the twentieth century. Rousseau averred that “the sovereign can banish from the state anyone” who refuses to believe in his “sentiments of sociability” as the civil and sole “religion.” However, a citizen who had publicly professed those “dogmas” and subsequently “acts as if he does not believe them . . . should be put to death” for his apostasy. Either accept and live according to the civil religion—in George Orwell’s fictional scenario, “Love Big Brother”—or suffer EXILE or EXECUTION!

Substitute “traditional Christians and observant Jews” for Rousseau’s “citizens” and we have a preview of the 21st century reign of terror that “Stalina,” the first female president of the United States, might have inflicted upon America.

The Democrat candidate tipped her own hand in her infamous “basket of deplorables” insult on September 9, 2016, against half of Donald J. Trump’s supporters—or roughly one quarter of the entire adult population in the United States. Mrs. Clinton dismissed as “irredeemable” (a religious term) and “not American” those American citizens whom she excoriated in a string of nasty, extreme left-wing epithets: “racist, sexist, homophobic, xenophobic, Islamophobic—you name it.” Mrs. Clinton obviously views multiple millions of Orthodox, Roman Catholic, and Protestant Christians, as well as hundreds of thousands of observant Jews and, ironically, Muslims, who affirm traditional sexual morality and marriage as contemptible and, to draw a logical conclusion, intolerable. That could have, in a worst case scenario, rendered Mrs. Clinton’s “deplorables” worthy targets of marginalization, oppression, and, ultimately, persecution in the neo-Stalinist regime that might have been.

“GOD BLESS US, EVERY ONE”
This year, more than any in recent memory, we can wish one another a “Merry Christmas” or a “Blessed Nativity” with joy and a sense of great relief. Thanks to the divine providence of our Lord Jesus Christ and to the voting citizens of the United States, the Clinton Apocalypse will not descend upon us after all.

Archpriest Alexander F. C. Webster, PhD, is a retired U.S. Army chaplain in the rank of Colonel and rector of St. Herman of Alaska Russian Orthodox Church in Stafford, Virginia.