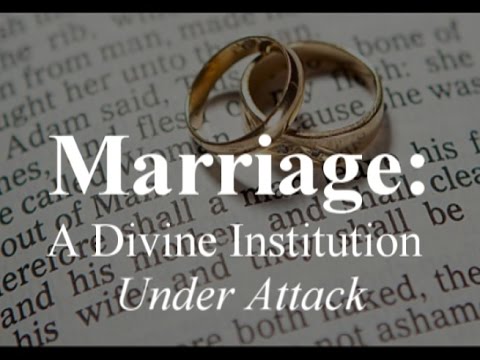 “The whole [gay marriage] argument was and is that the idea of marriage as the union of husband and wife lacks a rational basis and amounts to nothing more than ‘bigotry,’ reflecting animus against a certain group of people,” he said. “Therefore, no reasonable person of goodwill, we are told, can dissent from the liberal position on sex and marriage, any more than a reasonable person of goodwill could support racial segregation and subordination. You’ve heard the analogy drawn a thousand times. And this is because marriage, according to the re-definers, consists principally of companionship — the companionship of people committed to mutual affection and care. Any distinctions beyond this one they condemn as baseless.”

The idea of marriage as a conjugal relationship between a husband and wife has a long history, George explained, as a variety of philosophers and religious traditions have recognized its importance for society, including Plato, Aristotle and Gandhi. But those who wish to redefine marriage seek to throw out that rich tradition while not even understanding the arguments in favor of that tradition. Instead, he continued, they understand marriage to be simply based upon romance, but do not put forth arguments as to why government should recognize romantic relationships.

Same-sex marriage proponents “uncritically, then, not knowing what they’re rejecting, not knowing what the alternative is, conceive marriage precisely as sexual-romantic companionship or domestic partnership, laying aside, ignoring altogether, its defining social purpose, imagining somehow, I suppose, that the law has some interest in people’s romantic relationships just as such. What that interest could be, none of my friends on the other side have ever managed to actually express a view about. And yet, we are told, marriage must be ‘expanded,’ or, in truth, redefined, or, perhaps in greater truth, abolished or replaced with, a conception of ‘marriage’ as sexual romantic companionship or domestic partnership, because they can’t fathom how any reasonable person of goodwill can understand it in any other way,” George said.

Since those proponents of redefining marriage do not know or understand the arguments in favor of the traditional definition of marriage, he continued, they jump to the conclusion that there is no rational reason to disagree with them. And since those same-sex marriage proponents view those who dissent from the liberal orthodoxy as bigots, or the equivalent of racists, they have no reason to support the religious freedom of dissenters.

While some liberals and conservatives believe there can be a “grand bargain” in which gay marriage is allowed and the religious freedom of dissenters is supported, George pointed out that he has long argued that could never be the case, because liberal secularism is a comprehensive doctrine in competition with other comprehensive doctrines.

“Liberal secularism,” he said, “never was and never will be what the late John Rawls depicted it as being and hoped it would be, namely, a purely political doctrine, as opposed to what he called a comprehensive view (a view of human nature, meaning, dignity, and destiny) that competes with other comprehensive views.

“Nowhere is the reality of contemporary liberalism as a comprehensive doctrine, a secularist religion, more plainly on display than in the moral-cultural struggle over marriage and sexual morality. Liberal secularism will tolerate other comprehensive views so long as they present no challenge or serious threat to its own most cherished values. The Amish are probably safe. But when they do, they must be smashed, in the name, for example, of ‘equality’ or preventing ‘dignitarian harm,’ and their faithful must be reduced to a dhimmi-like status in respect of opportunities, in employment, contracting, and other areas, that, from the point of view of liberal secularist doctrine, cannot be made available to them if they refuse to conform themselves to the demands of liberal ideology.”

There are some liberals, George added, that do still value religious freedom, tolerance and diversity who have spoken out against the liberals who have sought to punish or restrict the religious freedom of those who dissent from the liberal orthodoxy on marriage and sexuality. But he believes those tolerant liberals will ultimately lose their battle against intolerant liberals.

“Of course, there will be some within the liberal community, Rawlsians and others, who will try to make some room for meaningful dissent, even in practice and not just in thought and speech. And they will make various arguments, principled and practical, for why [liberals] should avoid being too draconian in its treatment of heretics and dissenters. But they will lose the battle,” he said.