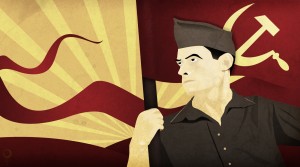 One of the finest American teachers acquiesced a few years ago to be my mentor. I am a stranger to the good man, but he agreed to answer my questions because he is in possession of a proper understanding of the nature of a true teacher, a public figure whose work is ultimately for the benefit of the common good. I go to him every few months with my most pressing quandaries. A while back I asked him to teach me about the nature of ideology. He fired off a small collection of ideas asserting that all ideology is evil and he explained why. Surely ideologues would object and, while calling for sophistical distinctions, would be formulating a semantic bait-and-switch scheme that passes for “truth” in these dark and deceitful times.

What is ideology?
According to Merriam Webster ideology is “1: visionary theorizing 2a: a systematic body of concepts especially about human life or culture b: a manner or the content of thinking characteristic of an individual, group, or culture c: the integrated assertions, theories and aims that constitute a sociopolitical program.” If we limit ourselves to the shallow dictionary definition, it may serve our purpose in drawing reasonably sound inferences about the nature of ideology.

But perhaps we can attempt to narrow the definition a little more so that we may end with a foundation of clarity upon which to build a coherent conclusion. George Marlen states that “ideology is an intellectual system of ideas or rigid abstract formulas mixed with scientific jargon and some empirical facts that claims knowledge about reaching perfection in the temporal order.” This doesn’t contradict Merriam Webster, but adds the vital final end of perfecting the temporal order.

Though it is wildly unpopular in the larger circles of academia, let us assume for the purposes of this discussion that things have final causes or real ends to which they portend. In the case of ideology let us stipulate that ideology’s telos is to reach perfection in the temporal order. In summation, ideologies are rigid schemes of ideas meant to organize individual lives, societies and cultures in a way that is intended to perfect the temporal order.

Surely it is a noble desire to try to create a heaven on earth, to make a paradise in this valley of tears, but that is an end that ultimately requires the denial of the reality of human existence. We are fallen, we are mortal, we are not meant to end in perfecting this created world that begins to decay at first touch.

Mr. Marlen correctly states that many of the ideas that comprise the various ideologies are empirical facts. There are in fact even many truths and truisms embedded in ideological schemes. But it is the nature of ideology to ill-weight truths and facts, to exaggerate some and minimize others in order to provide an apparently rational explanation for ideological structures and conclusions. I contend that artificially weighted facts and truths imposed on the human mind inherently harm a soul’s ability to see reality rightly.

Why are ideologies evil?
Eric Vogelin said that ideology is “to mold reality into a scheme consistent with a posited or assumed idea.” Ideology embodies the philosophical error of thinking that the world is in us, rather than that we are in the world, or that the box is in the shoe, rather than the shoe is in the box. The examples may sound silly, but a real look at the past will bear out the reality that ideologies are not only dangerous, but deadly in their attempts to forcibly reduce reality into a set of inflexible ideas wholly unsuited to their application.

The violence to truth and human souls is incalculable when rulers try to impose the unreality of ideology onto its populace. Think of fascist Germany or Stalinist Russia or Maoist China or the feminist movements all across the globe. The common denominator in all four references is that death is a necessary evil to carry out the ideologies. The ideological projects are treacherous attempts to distort reality; thus they are evil. The fruits of history tell this devastating tale in gruesome, repetitive scenarios.

Perfecting the temporal order is the attempt to put second things first and for this reason, as can be abundantly evidenced by recent tragic events, this method is amply demonstrated to be evil. Ideologies have caused not only the loss of the well-ordered society, but also the loss of the eternal truths and first principles that lead to the good society. The well-ordered society results from a culture that seeks the first things for God’s sake and the good temporal order follows as fruit from a tree. It does not work the other way around.

My mentor further explained to me that “all ideologies are evil, because they are pseudo-religions; they reduce the human being to an item, a piece of a machine.” This shouldn’t be too difficult to see by way of the countless ideological groups expediting the decay of Western Civilization. Ideologues cling to their ideologies as fervently as addicts cling to their vice and they require an extraordinary amount blind faith to believe the false promises. It is human nature that we bind ourselves to something, either a set of ideas or a particular religion. It is the height of folly that some ideologues assert that they are liberated from religion when in reality they have only bound themselves to disbelief by the ideology of skepticism, the emptiest religion in human history.

Is there any alternative to Ideology?
By now you may well be asking “well if all ideologies are evil, what is the alternative?” My mentor gives voice to the only anti-dote to ideology, that of adapting human life to the eternal order instead of the temporal order. He truthfully explains that Christians “do not worship an idea. We worship a person—God. No idea can ever begin to comprehend the reality of personal being. All ideologies fall afoul of the wisdom of the Psalmist, who says, “Put not thy trust in princes,” with the added trouble that the ideologue puts his trust in a ruling idea and turns it into his prince” We have a free will choice to make in this world when we decide who or what is the arbiter of truth. If we pick ourselves, we have chosen poorly. If we choose an ideology we have chosen poorly as well. If we choose the Truth, not because we decide it to be true, but rather because we discover it to be true, then and only then do we have a chance to ascertain the proper order and ends of human existence. Pope John Paul II reminds us that “the Truth is not consensus, but the convergence of the mind and reality.”

Abandon Ideology, Embrace Truth!
Ideologies then, are intrinsically evil. They are arrogant and end in death and destruction partly because they portend to see all the angles and ends of the created order concerning the human person when this is impossible. Socrates said “all wisdom begins in wonder.” This is the recognition that no matter how wise a person or a society becomes, to see all the ends of reality is beyond the limits of human perception, intelligence, and knowledge. The appropriate wonder and awe that accompany the observation of the created order, which emanates from the eternal order, demands that we remain open to the gifts of revelation promised to men of good will who can be greatly aided by a developed character and a cultivated intellect.

Monsignor Ronald Knox well characterized the proper order of things when he said that “we are here to colonize heaven, not make things better on earth.” This deep wisdom concerning the proper end of Catholicism reveals the paradoxical truth that in colonizing heaven, things do get better on earth. Heaven is the eternal order out of which all first things come and to which all first things will return. The temporal order includes all second things that find their proximate causes and ends in the temporary. It is a fact that the converse of the good Monsignor’s statement is true: if we attempt to colonize the city of man and care not for the eternal order, we will lose both.

By the state adoption of ideologies in the last several hundred years, we have seen not only the steady decline of the moral and material quality of the created order, but massive numbers of human souls lost and countless people murdered. We ought to abandon the horrid ideologies that hold captive the current social order and instead turn our gaze towards the Truth, the Creator himself, fully revealed by the incarnation of Christ. By the worship of the personal being of Christ, instead of the worship of a set of ideas, we can begin to know ourselves as we were truly intended to be and to order our lives to our true ends in the eternal order. Then and only then may we possibly end in the peace and prosperity that comprise our deepest longings.