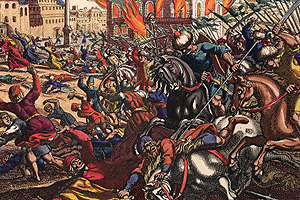 by Justin O. Smith –
Islam is violent and repressive, and its sacred texts are the heart of darkness at the center of the Islamic State’s inspiration and motivation, despite Barack Obama’s assertions in September 10th’s address to the nation that the Islamic State “is not Islamic” and that “no religion condones the killing of innocents.” Violence is an integral part of Islamic doctrine, following the example set by its Prophet Mohammed, and in the name of Islam and Allah, Muslims have been murdering innocents, since 656 AD.

Six hundred years after Mohammed, one of Islam’s most respected scholars, Ibn Khuldan wrote ‘Muqaddimah’ (Introduction to History), which explained: “In the Muslim community, the holy war is religious duty, because of the universalism of the Muslim mission and [the obligation to] convert everybody to Islam either by persuasion or force.”

Violence is an integral part of Islamic doctrine, following the example set by its Prophet Mohammed

Like most good Muslims, Khaldun’s inspiration came from ‘The Verse of the Sword’, Sura 9:5, “revealed” towards the end of Mohammed’s life, as well as similar themes previous to Sura 9:

Sura 9:5__ “…kill the Mushrikun (unbelievers) wherever you find them … But if they repent and perform As-Salat/ Iqamat-as-Salat [the Islamic ritual prayers], then leave their way free…” Also Sura 9:33__ “It is He [Allah] Who has sent His Messenger [Mohammed] with guidance and the religion of truth [Islam], to make it superior over all religions…”

The Hindu Kush, seventy-five thousand square miles between Afghanistan and Pakistan, was populated by Hindus until approximately 1000 AD and the Muslim invasions. An estimated 60 million Hindus were murdered by Muslims over a thousand year reign, and Hindu Kush is the Muslim name for the region. It means “Hindu Killer.”

Now today, the majority of the Muslim community worldwide, including the U.S., does not completely frown on their “holy warriors” in the Islamic State, Al Qaeda, Jaamat e-Islami and any other terror group one cares to mention, for fear of being called heretics or apostates themselves. The murderous “holy warriors” are following a literal interpretation of Koranic scripture, without omissions, innovation or revision. By contrast, heretical views deviate from doctrine.

The 2013 PEW Poll of the Muslim World shows that the majority of Muslims, in several countries, support the death penalty for Muslims who leave Islam, including Malaysia (58%), Egypt (88%), Jordan (83%), Afghanistan (79%), Gaza and the West Bank (62%) and Pakistan (75%); in 2006, a poll for ‘The Sunday Telegraph’ found 40% of British Muslims wanted Sharia Law in the UK and 20% supported the 7/7 bombers. And alarmingly, in 2011 nineteen percent of American Muslims stated they viewed Al Qaeda favorably, while a new poll shows 16% of the French population view the Islamic State favorably.

Are you beginning to see a pattern here?

Islam always has been and always will be an ideology of violence and conquest.

Logical minded Americans were not fooled by the big lie Obama delivered before the United Nations on September 24th, when he spoke of Islam’s “great tradition that stands for … the dignity of life, not murder.” Americans see a significant number of Muslims still support Sharia Law, slavery, rape and Islamic inspired violence and murder in this 21st century, and rather than “a religion of peace,” Islam always has been and always will be an ideology of violence and conquest.

Don’t get me wrong. I am thankful for the many Muslims who simply adhere to the first early peaceful verses of the Koran, but let’s not allow that to dissuade us from seeing and revealing the fact that Islam was propagated through violence, staying with Mohammed’s teachings, and it is still utilizing violence today. This can clearly be seen by examining the teachings of Islam, the daily news reports and practically any good, scholarly history book.

One problem in Islamic tradition, affirmed by many scholars, is the doctrine of abrogation, which states that later revelation to Mohammed supersedes prior revelation. And the Koranic verses ordering Muslims to fight and slay infidels, Christians and Jews came after those admonishing Muslims to live with non-believers in peace and without religious compulsion.

As Obama spoke before the UN, he called on the Islamic nations and their leaders to address the spread of “extremism,” full well knowing that he was speaking to the very advocates of Wahabbist fundamentalism, other Islamic orthodoxies and proponents of inflexible, intolerant Islamic scholars, the likes of Sayyid Qutb. Saudi Arabia and Qatar, for example, have supported terrorism and financed the spread of Wahabbism and Qutb’s Islamic philosophy globally, including in America, for decades.

And now Saudi Arabia, Qatar, Turkey, the United Arab Emirates and several others, who helped create, train and fund the Islamic State, are screaming for the U.S. and the West to end the vicious advance of the Islamic State. They look to destroy the Islamic State, only because they can no longer control its self-appointed “caliph,” Abu Bakr al-Baghdadi, who has announced his intentions to take Mecca and Medina; so, it is fear of losing their power and their regimes that motivates them, not any disagreement with the Islamic State’s implementation of jihad and the violent doctrines of Islam.

What about the Muslim Brotherhood, the Islamic Republic of Iran, Hezb’allah, which means “the party of Allah,” and Hamas, which means “Islamic Resistance Movement”? Does Obama deem these Islamic entities “not Islamic” too?

Koran 8:12 “I will cast terror into the hearts of those who disbelieve. Therefore strike off their heads and strike off every fingertip of them.”

As Obama appealed to young Muslims to follow their “great tradition [Islam] that stands for education … innovation, not destruction,” he must have intentionally forgotten some of the other traditions of Islam. The recent spate of beheadings of Westerners by the Islamic State is only the old made new again, and although horrible beyond belief, they actually pale in comparison to the heinous atrocities committed in the name of Allah across the centuries. Three thousand Catholic nuns were raped at the Church of St Sophia during the sacking of Constantinople in 1453, and many other women and children were simply torn to pieces.

Koran 8:12 “I will cast terror into the hearts of those who disbelieve. Therefore strike off their heads and strike off every fingertip of them.”

Millions of devout fundamentalist orthodox Muslims, devout in the manner of Osama bin Laden, Abu Bakr al-Baghdadi, and Ayatollah Ali Khamenei, are making preparations and have already been waging a divinely endorsed war against Europe, America and Israel. And, rather than continue against all reason and, in the light of Islam’s sacred texts, to propagate the lie that “Islam is peace,” which is placing America within a quagmire of reoccurring expansionist jihad, this administration and future administrations must cut all funding to all Islamic nations and acknowledge that “extremism” and violence are the basis of Islam, if America is to win the future war against Islam.