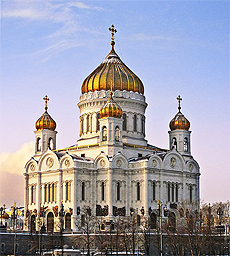 by Marc Bennetts –
At the height of the Cold War, it was common for American conservatives to label the officially atheist Soviet Union a “godless nation.”

More than two decades on, history has come full circle, as the Kremlin and its allies in the Russian Orthodox Church hurl the same allegation at the West.

“Many Euro-Atlantic countries have moved away from their roots, including Christian values,” Russian President Vladimir Putin said in a recent keynote speech. “Policies are being pursued that place on the same level a multi-child family and a same-sex partnership, a faith in God and a belief in Satan. This is the path to degradation.”

In his state of the nation address in mid-December, Mr. Putin also portrayed Russia as a staunch defender of “traditional values” against what he depicted as the morally bankrupt West. Social and religious conservatism, the former KGB officer insisted, is the only way to prevent the world from slipping into “chaotic darkness.”

Many Euro-Atlantic countries have moved away from their roots, including Christian values

As part of this defense of “Christian values,” Russia has adopted a law banning “homosexual propaganda” and another that makes it a criminal offense to “insult” the religious sensibilities of believers.

The law on religious sensibilities was adopted in the wake of a protest in Moscow’s largest cathedral by a female punk rock group against the Orthodox Church’s support of Mr. Putin. Kremlin-run television said the group’s “demonic” protest was funded by “some Americans.”

Mr. Putin’s views of the West were echoed this month by Patriarch Kirill I of Moscow, the leader of the Orthodox Church, who accused Western countries of engaging in the “spiritual disarmament” of their people.

In particular, Patriarch Kirill criticized laws in several European countries that prevent believers from displaying religious symbols, including crosses on necklaces, at work.

“The general political direction of the [Western political] elite bears, without doubt, an anti-Christian and anti-religious character,” the patriarch said in comments aired on state-controlled television.

“We have been through an epoch of atheism, and we know what it is to live without God,” Patriarch Kirill said. “We want to shout to the whole world, ‘Stop!’”

“We have been through an epoch of atheism, and we know what it is to live without God,” Patriarch Kirill said. “We want to shout to the whole world, ‘Stop!’”

Although Mr. Putin has never made a secret of what he says is his deep Christian faith, his first decade in power was largely free of overtly religious rhetoric. Little or no attempt was made to impose a set of values on Russians or lecture to the West on morals.

However, since his inauguration for a third presidential term in May 2012, the increasingly authoritarian leader has sought to reach out to Russia’s conservative, xenophobic heartland for support.

It has proved a rich hunting ground.

“Western values, from liberalism to the recognition of the rights of sexual minorities, from Catholicism and Protestantism to comfortable jails for murderers, provoke in us suspicion, astonishment and alienation,” Yevgeny Bazhanov, rector of the Russian Foreign Ministry’s diplomatic academy, wrote in a recent essay.

Analysts suggest that Mr. Putin’s shift to ultraconservatism and anti-West rhetoric was triggered by mass protests against his rule that rocked Russia in 2011 and 2012. The unprecedented show of dissent was led mainly by educated, urban Muscovites — many with undisguised pro-Western sympathies.

Some 70 percent of Russians define themselves as Orthodox Christians in opinion polls, and opposition figures in the past have called on the church to play a mediating role between the Kremlin and protesters.