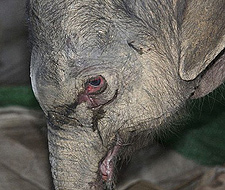 by Fr. Ben Johnson –
For a few hours on Thursday, the all-seeing eyes of the world’s media were fixed on the eyes of a pachyderm.

In a story that tugged at heartstrings around the globe, the media reported that a baby elephant named Zhuangzhuang, born in a Chinese zoo on August 30, cried for five hours after being rejected by his mother.

When zoo trainers saw her trying to stomp the newborn to death in her cage, they thought it was an accident. But after the mother tried to kill her child a second time, personnel had to remove the calf for his own safety.

By nature’s design, a child loves his parent, even a murderous one, and the tears began to flow until his eyes turned red. “He couldn’t bear to be parted from his mother and it was his mother who was trying to kill him,” a spokesman from the Shendiaoshan Wild Animal Natural Reserve Area said.

On a slow news day, reporters from across the earth focused on the infant elephant. His story of abandonment began filling news outlets from the Belfast Telegraph to the Emirates 24/7, from theInternational Business Times to Somalia Online.

But none made the obvious connection: How does a human baby whose mother tries to kill him react?

How does a human baby whose mother tries to kill him react?

MSNBC – which can be said to have nothing less than an obsessive love affair with abortion –posted the story, with the opening line: “We would like nothing more than to offer this little elephant a hug and a tissue.”

Another stalwart of the abortion lobby, The Huffington Post, explained, “Infanticide can be attributed to stress causing factors like overcrowding and captivity, which can interfere with animals’ protective instincts towards their young.”

Elephants are not the only animals with an inborn desire to nurture their offspring. One woman who participated in veterinary abortions told LifeSiteNews’ Rebekah O’Brien that post-abortive dogs and cats know something has happened, that something is missing. “They know that something is really, really wrong,” her friend said. “They wake up and they whine and they look around and they sniff around the room, and they know that they’re not pregnant anymore. Some of them get really frantic, and you can tell they’re searching for their babies.”

Abortion is not just horrific but an affront against nature.

These representatives from the animal kingdom show us something: Abortion is not just horrific but an affront against nature.

Post-abortion syndrome is infinitely more painful for women, who face a markedly higher risk of depression and suicide. A team of Chinese researchers from Anhui Medical College found last year that post-abortive women were 49 percent more likely to experience depression.

And then there is the trauma of the rejected baby.

We have known about the child’s struggle in the womb since NARAL founder and former abortionistDr. Bernard Nathanson released The Silent Scream in 1984.

Abby Johnson recorded how seeing her first ultrasound-guided abortion jarred her convictions, as she witnessed “the sudden jerk of a tiny foot as the baby started kicking, as if it were trying to move away from the probing invader. As the cannula pressed its side, the baby began struggling to turn and twist away. It seemed clear to me that it could feel the cannula, and it did not like what it was feeling.”

These events are less celebrated than the crying elephant. Instead of calming this child’s screams and drying his – or, more likely, her – tears, the pro-abortion lobby is doing everything it can torepeal ultrasound laws, fight informed consent, and deny women the information they need about the lives that will be affected by their abortion decision. They continually deny the science behind fetal pain. In spite of an undeniable scientific consensus on when life begins, they belittle the unborn as “a cluster of undifferentiated cells” or, more egregiously, a parasite.

And although it is not fashionable to mention, the Left is waging war against the greatest force for life and human dignity in human history: the Christian religion.

the Left is waging war against the greatest force for life and human dignity in human history: the Christian religion

Deacon Keith Fournier noted that the ongoing rash of babies being flushed down toilets, abandoned in dumpsters, or thrown into trash cans signals the return of an ancient pagan practice of exposure. In the ancient world, from Greece to Rome and Carthage, unwanted children were left to die on hills and in the wild from starvation or predators. The early Church Fathers tied this to abortion, as I discussed on the air recently on “Nothing But Truth with Crane Durham.”

The conversion of Europe ushered in a new reverence for life.

If Christianity subsides, what will replace it is not, as Dawkins and other atheist proselytizers imagine, an Enlightenment paradise where reason banishes the cruel power of superstition, but a rebirth of barbarism, never fully extirpated from the human heart, now free of its cultural fetters to devour society’s most helpless. As the Lord of Life is denied, the culture of death fills the void – or rather pulls the world into the abyss.

And the Left’s veneration of abortion cheapens the sanctity of all life, preborn, elderly, infirm, “defective,” or healthy.

Let the other side deny as it may. Salutary reminders from nature will drive home how deep-seated familial instincts are even among dumb beasts.

Let the media cover up. I don’t need to see tears of an unborn child. I feel my own. The unborn child does not scream. Nature screams against the perversion of maternal affection and lost parenthood. And the rejected child’s tears assure post-abortive mothers their absent babies – too many of them – forgive them and long to be reunited with them one day.

My heart broke for the crying elephant. But there is another elephant in the room that desperately needs to be addressed.