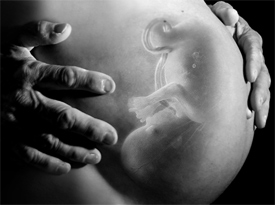 A few years ago I was shocked to read in an Orthodox publication that the Orthodox Church condemns abortion “in all cases, except to save the life of the mother.” It was the sort of theological slipup anyone might have made, I suppose, but it was nonetheless a seriously defective statement of the teaching of the Orthodox Church.

A friend just sent me a statement from a rather famous conservative Episcopalian, a man of considerable learning and culture, who began by remarking on “the unholy alliance of abortion-on-demand and the feminization of God,” but continued in the very next sentence to announce that “No one, except fanatics and mechanists, would argue that abortion is in every case and without exception evil.” “In cases of violent sexual attack,” he wrote, “such as rape and incest, abortion is a permissible and ethical alternative. In cases of provable damage to the mother or the prospect [sic] of a monstrous birth, it is again a sane option.”

Well, quite simply, there are no cases in which the Orthodox Church—or the Roman Catholic Church, for that matter—condones abortion. (Nor did the Episcopal Church, in healthier times.) The act is murder, and it is always murder, and there are no circumstances, whatever, in which murder is a legitimate moral option. The deliberate, directly intended killing of an innocent life is a sin that screams to heaven for vengeance. Always, in all circumstances, and with no exceptions.

Abortion is murder, and it is always murder, and there are no circumstances, whatever, in which murder is a legitimate moral option.

What the aforementioned article should have said is this: There are instances in which it is legitimate for an expectant mother to undergo certain medical or surgical procedures that will save her life, even if these procedures inevitably involve the death of her unborn child. In these cases it is not a question of intentionally aborting the child. They involve, rather, accepting the loss of the child as an unavoidable consequence of caring for the mother’s health.

The clearest and surest example is the ectopic pregnancy. As everyone knows, should the fetus become lodged in the oviduct or fallopian tube, its continued growth will result in the death of both child and mother. A normal and proper procedure in this case is the removal of the fallopian tube, from which the death of the unborn child inevitably follows. In this case the death of the child is not sought, nor is the mother’s life saved by the child’s dying.

A similar dilemma would arise in the case of an expectant mother diagnosed with uterine cancer. The death of the child obviously would result from the removal of the cancerous organ, but it is not the death of the child that is deliberately sought, nor is the mother’s life saved as a result of the child’s death. This is not an abortion in the sense used by moral theology; it is just a standard application of the ethical principle known as “double effect,” which is undoubtedly what the magazine in question, an Orthodox journal that takes its theology seriously, intended to say.

Unfortunately, however, given a chance to correct its earlier slip, the magazine compounded the difficulty by asserting that “the Church teaches that the mother must be saved.” No, strictly speaking, this is not true either; such a very tough medical decision is normally a matter of the mother’s choice, and I am familiar with no teaching of the Orthodox Church that would oblige a mother’s conscience to value her own life over her child’s. The mother’s life is not intrinsically of greater value than the child’s, and every mother known to me, if the choice were ineluctable, would value her child’s life above her own.

It is interesting to observe that the Roman Catholic Church recently honored with canonical beatification a woman who died in 1962 in consequence of choosing not to undergo the surgical procedure just mentioned. Even though she knew that it would result in her death, Gianna Molla carried her baby to term and then died a week later. Her little girl grew up and was on hand in St. Peter’s Square to see her mother raised to the dignity of the altar.