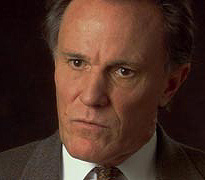 by Kristin Rudolph –
Usually Frank Schaeffer’s talks follow a predictable pattern in which he describes how he followed in the footsteps of his prominent evangelical father, Francis Schaeffer, became disillusioned with the “Religious Right,” and now learns about God mostly through his relationship with his grandchildren. Recently, however, Schaeffer candidly discussed his personal theological views at Revolution NYC, an emergent congregation in Brooklyn, NY.

Over the past couple decades, Schaeffer has distanced himself from his family’s evangelicalism, and describes himself as Eastern Orthodox. But during his talk, Schaeffer told Jay Bakker, pastor of Revolution NYC and son of former televangelists Jim and Tammy Faye Bakker: “I describe myself as a Christian atheist.”

“That describes the arc of my feelings in any given day … Why can’t you be an atheist some days and love God other days?” He attempted to explain this contradictory statement with an analogy: “There are days I’m married, there are days I’m not married. There are days I love my wife, there are days I fight with my wife … Why when it comes to theological questions, certainty is given a premium when nothing else in life works that way?” 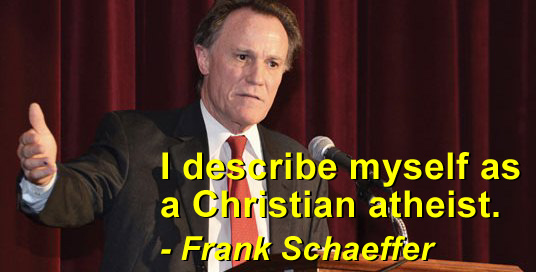 As a “Christian atheist,” Schaeffer subscribes to a very limited version of “Christianity.” He described his low and selective view of scripture:

“If you take the Christian teaching seriously that Jesus is the son of God, then obviously his life is the lens through which you read the rest of scripture and pick and choose what you will do and not do because he said there are parts of the law that are bull****. [Jesus said] ‘The law says [do this,] but I say don’t do this.’ So therefore, read the Bible expecting to edit it and get rid of the crap and stick with the stuff that fits with the life testimony, which ends with Jesus saying ‘Forgive them for they know not what they do.’”

To Schaeffer, “Evil is only evil because it’s ugly. There is no such thing as bad actions there’s just ugly actions … When we say evil, it’s not a constant … we’re at a primitive way station on the way to something else.” He continued: “The answer to evil is not now. The answer to evil is in the future that you can’t see and that’s where I think faith comes in.”

He views Jesus as a hopeful example toward which humans may evolve and emulate. According to Schaeffer, “who we believe Jesus is is not the point” Instead, “We are on a way station, on a journey that God is also traveling as a creator. This is not ‘it.’ We’re only getting the first glimmers of ‘it.’ The first real sign post for me is ‘Forgive them for they know not what they do.’ That’s a new command.” Schaeffer told the congregation: “There really is ethical evolution … Follow that path of ethical evolution that will eventually get us to an intended end point.”

For Schaeffer, the real problem is certainty about any belief. He derides both Christian “fundamentalist” and atheists for holding their beliefs with conviction. To avoid the appearance of inconsistency, he admitted: “That’s my personal view, I can’t prove any of it.”

2 thoughts on “Frank Schaeffer is a ‘Christian Atheist’”