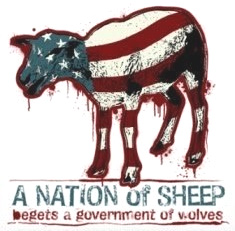 by Daren Jonescu –
Those who have been forcibly divested of their natural liberty by tyrants must be pitied. They have been coerced into accepting lies of security and state beneficence as paltry compensation for the loss of their birthright of a life worthy of human beings. And yet such wretchedness of external conditions, though destroying a man’s practical life, does not destroy the man. More wretched than this is the spiritual self-destruction of one who would freely sell himself into tyranny in exchange for that very same subhuman compensation.

Western politics has fallen under the domination of progressive authoritarianism. The press, once perceived as a safeguard against government corruption and overreach, has become an almost monolithic mouthpiece and apologist for oppression. Art, long modernity’s bastion of moral questioning and humane doubt in the face of materialist reductionism, has finally reduced itself to dogmatic nihilism, collectivist amorality, and court jesterism in the service of power.

These nightmarish degradations are often cited as causes of our decay, as though they were abstract realities controlling civilization’s fate as the laws of physics control the fall of a stone. The most nightmarish fact of all, however, is that these conditions were not imposed upon us by force. The modern West’s demise was chosen. Generations of men walked into this of their own volition. They voted for it. They purchased it. They chose to believe in it, defying the evidence of their own eyes and common sense. They willingly surrendered themselves to slavishness and its diminished moral horizon.

For thousands of years, men fought for a breath of freedom while struggling against the shifting currents of irrational governance imposed by brute force. Modernity promised a reasonable way out of all that, producing the theory and practical conditions of political liberty, elevating the individual human being above all coercive power, and hence allowing men, to a greater degree than ever before, to choose their own social conditions, and to project their choices into the future with some measure of solidity. But modern men, given that choice, have — gradually but consciously — forsaken all of it to return to the conditions from which men strained to extricate themselves for millennia: fleeting flames of hope capriciously snuffed out in sudden storms of power lust.

Is it time to ask whether we flatter ourselves when we imagine that Western modernity will be remembered by future men as the age of Shakespeare, Mozart, the Industrial Revolution, rationalism, science, and political liberty? As things now stand, it is difficult to see how Time’s dust storm will not settle to reveal this epoch as that of man’s ultimate shame: the moment when men walked freely into hell, merely for the sake of a little rest from the trials of living as men. Modernity may be on the verge of obliterating its own great promise and achievement, and revealing itself at last as The Age of the Great Surrender.

Man is a rational and moral being, living in accordance with his nature by exercising his reason in the name of choosing well. This means that he can live specifically as human only within the range of his freedom to make practical choices concerning what is best. This is the primary meaning of the modern notion of freedom as a natural right: a man cannot live as a man without the condition in which his definitively human faculties may be exercised, namely freedom from irrational constraint.

Virtue (literally “manliness”) simply means life lived according to our nature. And this requires the capacity to choose; a man who physically does what a man ought to do, but who does so involuntarily, through external compulsion, is no more living as a man than would be a machine that performed the same actions. Giving up one’s realm of choices (and their consequences) to the state means giving up to government all that was one’s birthright.

A standard moral puzzle used in political philosophy classes asks whether a free man may sell himself into slavery, i.e., whether we may freely choose to surrender freedom of choice. Logical implications aside, it is now all too clear that in practical terms, the answer to that question is a resounding “Yes we can.” Mankind has made precisely this exchange. Everywhere on Earth where people with free electoral choices select the path of greater state control, greater state beneficence, and greater domestic security at the price of their natural liberty, they are selecting slavery, and voluntarily sacrificing freedom.

But sacrificing freedom means surrendering more than “mere individual liberty.” Liberty is not an abstraction; it is man’s nature manifested in society. Freedom is the arena of nature’s test of a man’s virtue. “Am I a good man? Am I living according to human nature, or at odds with it? Am I of sound character, and able to follow the demands of that character in a moment of challenge or hardship?” These questions comprise the fundamental imperative of human life, i.e., the innate demand to live up to something.

The desire to avoid having to ask such questions of oneself — to avoid the basic responsibility and difficulty of living as a member of the species into which one was born — is the impetus to choose one’s own enslavement. For what is not my responsibility cannot be blamed on me. Every decision and responsibility I relinquish to the state is another increment of what we may call freedom from freedom — freedom from trials, freedom from risk, freedom from tests of my virtue, my knowledge, my willpower, my steadfastness. We need, and therefore happily accept, the authoritarian’s ultimate propaganda — the debunking of “traditional morality” — in order to mask the shame and disgrace of what we have done in the name of our loathsome, inhuman notion of “comfort”: comfort understood as not having to care, about our souls, about others, about the results of our choices, and even about our choices themselves.

In the name of freedom from freedom, i.e., “comfort,” we surrender human existence. At Metaphysics XII.10, Aristotle explains God’s relationship to the universe by analogy with the hierarchy of a household. The freemen of a household are, in a sense, the least free, if freedom means lack of responsibility for choosing. In this particular sense, Aristotle says, the household slaves are freest, since they are responsible for little in the way of moral choice, and hence their particular actions are of little consequence to the common good. They are, as he says, free as the household animals are free, to “live for the most part at random.” The freemen of the household, by contrast, “are least at liberty to act at random, but all things or most things are already ordained for them,” in the sense that they have responsibilities from which they must not shrink. Thus, freedom entails difficulty, doubt, and the inescapable burden of choice, all of which are therefore essential to living as a man. The slave, by contrast, while “spared” the burden of moral responsibility for his life, is for that reason least able to live as a human being — he is least able to exercise meaningful choice.

Freedom from freedom means sacrificing choice and its inherent responsibility in favor of the enslaving yoke that “liberates us” from the burdens of self-determination. A man who is living up to human nature will always select freedom-for-virtue over freedom-from-virtue. A man who is unwilling to live up to human nature will choose the opposite path, self-enslavement.

This urge to surrender freedom-for-virtue in favor of freedom-from-virtue would merely be a private crisis, were it a rare case. When, however, a general population — when an entire civilization’s general population — makes this surrendering choice, no one can escape. The material result, the wished-for über-state, destroys or restrains everyone’s freedom — that is, everyone’s capacity to live a human life — whether any particular man chooses to surrender himself or not. Thus, modern progressive authoritarianism may properly be defined as universal surrender by majority will. You will give up your freedom to choose how to use the fruits of your labor; the government will decide how much you may keep, and how the remainder will be used. You will give up your responsibility for your children; they will be raised primarily by the state, according to the state’s judgment of what kind of citizen is required. You will give up your practical means and moral will to defend yourself; the government will disarm you and demand that you remain passive against all threats, leaving your safety and preservation entirely in the state’s hands. You will give up responsibility for saving and providing for your own future well-being, and that of your loved ones; the government will arrange your medical care and future economic support, and the sick and elderly will be removed from your active consideration and tucked away quietly at state facilities.

Private virtue, i.e., men living as men, will no longer be required; where feasible, it will not even be permitted. You will surrender your adult responsibility and choice — your natural human existence — in exchange for (false) promises that the state will take care of the moral realm on your behalf, leaving you “free” to enjoy a responsibility-free, guilt-free, shame-free existence of transient pleasure and amusement without fear of consequences. There will be only one exception to this freedom from responsibility: you will be reviled and punished, legally and socially, for every way and in every instance in which you are perceived as refusing to surrender.

You will surrender. Your soul-preserving resistance will be crushed, or you yourself will be crushed. The defenders of the cause of “freedom from freedom” — the modern masses, the willingly oppressed — must remove you from their sight, by public mockery or by law: your intellectual refusal to surrender your personal responsibility makes them uncomfortable, and this will not be tolerated. For their comfort is the new creed, the morality of the modern un-men, and there is no room here for awkward reminders of the natural freedom, responsibility, courage, thought, art, and simple decency surrendered in the name of this inhuman, coercive comfort.

Historically, men struggled to maintain their moral dignity against forms of surrender imposed upon them by the strong few. Today, it is the majority that freely chooses to divest itself of human nature, while an ever-shrinking minority pleads for the right to remain human. We are living through The Great Surrender.