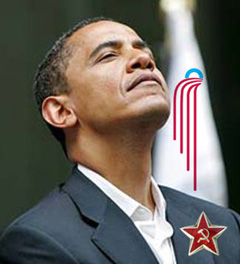 by J.T. Hatter –
It is impossible to be the leader of any large enterprise and not alienate someone, but Barack Obama has managed to alienate virtually everyone who has had anything to do with him. Who has Barack Hussein Obama not alienated in the last four years?

Barack Obama has alienated Great Britain, our closest military ally, both with insults and official actions. He betrayed the Brits by failing to support them over the Falklands and by revealing their nuclear military secrets to the Russians. Obama has singlehandedly destroyed our “special relationship” with the UK.

The United States had been Israel’s staunchest ally since the founding of that nation in 1948. No more. Obama sides with the Palestinians and openly supports the Muslim Brotherhood. He sent two and a half billion dollars to the new Muslim Brotherhood government in Egypt just this year. Obama has repeatedly snubbed and insulted Israeli prime minister Benjamin Netanyahu and has vetoed a preemptive attack on Iran to halt their clandestine nuclear weapons program. The Israelis no longer trust the Americans. Who can blame them?

As soon as Obama took office, he went on a whirlwind tour of the world. It turned out to be a personal mission to insult America’s traditional allies and encourage and ingratiate himself to America’s enemies — especially to the radical Islamists. Obama has reversed the entire course of American foreign policy, much to the detriment of freedom, liberty, and stability in the world at large. After four years of inept and counterproductive Obama foreign policy, the world is on the brink of economic ruin, warfare, and chaos.

Got Racism?
No politician in American history has gotten more mileage out of racial demagoguery than our “post-racial” president, Barack Obama. But it has cost him. White Americans are sick and tired of being tagged as racist for merely disagreeing with his progressive agenda. Ann Coulter’s new book, Mugged: Racial Demagoguery from the Seventies to Obama details Obama’s efforts to push “…the Left’s agenda to patronize blacks and lie to everyone else.” Obama is a master at both patronizing and lying. Dinesh D’Souza also dealt with Obama’s talent for successfully gaming America’s racial dynamic in his documentary Obama’s America 2016: Love Him. Hate Him. You Don’t Know Him.

Obama has an uncanny ability to use the racial sensitivities of white people to his advantage. He got himself elected president by preying on white guilt and voicing an endless, mesmerizing stream of feel-good hope and change rhetoric that promised a post-racial America under his stewardship. Instead, he has done more damage to race relations since George Wallace and Bull Connor, both segregationist Democrats. Glenn Beck expressed the views of many Americans when he said on Fox News,

“This president, I think, has exposed himself as a guy, over and over again and over again, who has a deep-seated hatred for white people or the white culture. I don’t know what it is… I’m not saying he doesn’t like white people, I’m saying he has a problem. This guy is, I believe, a racist.”

It can be hard to figure out the chameleon-like Obama. He talks a good game, but underneath you know he’s up to something else entirely different from what he’s saying, and it’s not good. Obama reveals himself in his past speeches and associations, and in his twenty-year attendance at the Trinity United Church, whose pastor Jeremiah Wright espoused black liberation theology from the pulpit, telling his congregation, “God Bless America? “Naw, naw, naw. Not God Bless America. God Damn America! That’s in the Bible.” We know Obama from his public embrace of racist law professor Derrick Bell at Harvard, his refusal to prosecute baton-wielding Black Panthers who intimidated white voters, and from the direction of his current policies.

Amid all this. he has alienated an awful lot of people, especially those of us who believe that all men are created equal and stand equal before God. Race relations in this country are worse now than they’ve been since the 1960’s. Instead of a nation governed by equality, mutual respect, and brotherly love we are a nation torn apart.

Shoving Granny Off the Cliff
Obama has thoroughly alienated those seniors intelligent enough to realize what he has done to them. He promised that the federal government would respect and support them, but the veils have been lifted from the abstruse, unread ObamaCare. Nancy Pelosi was right — we did have to pass the law in order to find out what was in it. And now we know that seniors were sacrificed as the first fruits on the altar of ObamaCare. They are going to lose the most and suffer the most because ObamaCare defunds Medicare, places special taxes on their investment income, medications, medical devices, and premium insurance plans; and debilitates and destroys the Medicare Advantage program. Doctors, hospitals, and insurance companies will be driven out of business. Those who serve the elderly will be among the first to go. Obama is on record as personally arguing for less health care for seniors and yes, the IPAB is a death panel.

Alienating the Entire Political Spectrum
Obama ran on a platform of bipartisan unity. That was never his intention. There has been no bipartisan unity since he took office. Even Vice President Joe Biden (Jackass Joe), in his recent debate with Paul Ryan, made it quite clear there was going to be no bipartisan cooperation between the Obama administration and the Republicans. Not on the agenda. ObamaCare, for example, was rammed through Congress without a single Republican vote. Obama created a historical landmark of political alienation with that one.

Obama has alienated the nation’s patriots. There is no question that Obama’s primary goal is to transform the United States of America into a socialist state. He has said so many times and made his aims clear in his speech to the nation at Osawatomie, Kansas on December 6, 2011. In that speech he said that capitalism didn’t work and had never worked, and declared, “…it’s not as if we haven’t tried this theory.”

Capitalism and free enterprise a theory? It is the economic dynamic that made America the most prosperous nation in the world — until it was crushed under the weight of socialist government regulation, taxes and spending. But capitalism is not the socialist economic model. It is the antithesis of it. At Osawatomie, Obama shook his finger in America’s face and declared a radical new transformation of the American socioeconomic system — to a big government, statist, social democracy, along the European model. Obama is the first anti-American President.

Obama has alienated everyone who believes that the USA had better get its fiscal house in order while we still can. The U.S. Senate hasn’t passed a budget in three years, despite that being a Constitutional requirement. The President’s own annual budget sports a trillion-dollar deficit — the fourth in a row. He has no intention of delivering a balanced budget or returning the USA to fiscal sanity. That much is obvious to everyone.

Even libs in the entertainment industry are beginning to realize that it’s too dangerous to let Obama have another term. Lindsey Lohan has endorsed Romney. Piers Morgan of CNN wrote about Romney that, “He’s one of the least principled politicians I’ve met. But I believe Mitt Romney might just save America.” About Obama he wrote,

“The great messianic tidal wave of optimism Obama swept in on has been replaced by harsh reality. He promised Americans tremendous ‘hope’ and ‘change’ and, frankly, they don’t feel he’s given them much hope, or changed very much.”

Throwing Christians Under the Bus
Obama has repeatedly slapped religious believers in the face with his unconstitutional and reprehensible positions on the Defense of Marriage Act, gays in the military, abortion, and the ObamaCare requirement that religious hospitals and institutions provide birth control and abortifacients to those enrolled in their health-care plans. He has carefully excised references to God from his speeches and references to our founding documents.

Bishop E.W. Jackson, a black pastor and bishop, is exhorting black Christians to leave the Democratic Party, because they tossed God out of the party platform in Charlotte, and because Barack Obama’s personal and political views are in direct opposition to Christian belief and doctrine.

Obama has been called the most biblically hostile President in United States history. His speeches are peppered with remarks disrespectful to Christians, saying they “cling to guns or religion” or express “antipathy to people who aren’t like them.” Obama has declined to host services for National Prayer Day. Obama nominated three pro-abortion ambassadors to the Vatican in 2009, all of whom were summarily rejected. How offensive can you get? Obama and his Department of State contemptuously impose the administrations’ pro-homosexual agenda on other countries whose religious beliefs define homosexuality as a sin and abomination. Obama has enacted hundreds of public policies that are anti-Christian. If Obama has a prayer for re-election, it isn’t with the Christians.

Hopenchange or Hype and Chains?
Obama has alienated his supporters, the people who voted for him, who contributed to his campaign, and who feverishly worked to get him elected. Obama has betrayed them all. Those who believed that he was going to be a unifier and could improve their lot now realize that Obama is nothing but an empty chair, a con man, a Marxist in disguise. He offers them nothing but government dependency, the statist form of slavery. No hope. No change. They’re better off with Republicans, who offer a chance for true equality, and a job.

Obama has alienated about half the members of the Democratic Party. That once proud and responsible political party has degenerated under Obama into America’s de-facto socialist party. The Democratic Party’s policies are so radically anti-American, anti-white, anti-family, and anti-God, that those hard-working, responsible Democrats left in the party can only despair at what he has done to them. If you are a Democrat, you are a socialist. That is disgraceful.

Obama is going to lose the upcoming election because he has alienated virtually every American who works hard, plays by the rules, and believes in the American promise. All that are left to him a few like-minded progressives, atheists, socialists, and Democrats.