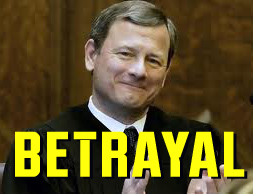 by Mike Razar –
You win some; you lose some. It is doubly painful to lose because of a betrayal by someone you admired and trusted. Caesar’s dying words were “Et tu Brute”. Judas Roberts has broken faith with everyone who cares about Constitutional freedom.

Given the opportunity to at least slow two centuries of the assumption of dictatorial power by the federal government, Roberts has chosen to side with the Jacobins. His name henceforth is inexorably linked with Benedict Arnold, the one-time hero of Saratoga who mysteriously changed sides when his loyalty was most needed by General Washington. Nathan Hale must be sobbing in his grave today.

Just as the betrayal by Arnold ultimately did no lasting harm, history will record that this act of cowardice sparked a renewed commitment of our modern Tea Party patriots to the founding principles of liberty. Perhaps our righteous indignation will go beyond defeating the liberty challenged politicians in Washington. They should amend the Constitution, to clearly limit the powers of the federal government to tax and regulate the everyday lives of individual citizens.

For now, every Tea Party patriot should sign a petition calling for the resignation of Mr. Roberts.