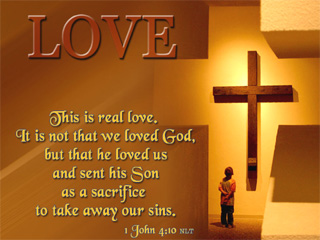 There’s such a thing as objective truth and it comes from a perfect and unchanging God. Love tells the objective truth. It does so as patiently and gently as possible, but it does so without flinching. Love does not apologize for the truth. Love will not amend the truth in order to spare someone’s feelings. …

It seems my choices these days are either: 1. Celebrate homosexuality or be a homophobe. 2. Support the “right” of two men/two women to marry, or be a hateful bigot. 3. “Do unto others…” or be a hypocrite.

Loving my neighbor seems to have gotten a whole lot trickier.

How do you love the person who requires you to celebrate their sin or be punished?

It’s a good question. WWLD? (What would love do?) And what is love, anyway? What does love have to do with all of this? Everything. Just not what you might think.

Mr. Obama now says his opinions about marriage have “evolved” as dictated by his Christian faith and the Golden Rule, and no longer can he deny same-sex couples the “right” to marry. See that? In one fell swoop the President, in his infinite wisdom, decreed that all of human history, the Natural law, and the revealed moral law are suddenly contrary to Christian love. He has determined what “love” really means, and no one can honorably disagree any longer.

Love is wanting the good of the other, as other.

St. Thomas Aquinas said: “Love is wanting the good of the other, as other.” Love can never want what is bad for the other. What is good for the other? The truth. “Love does not delight in evil but rejoices in the truth.” Not the popular truth, or the current truth; not the truth that makes everyone feel good, or the sentimental truth; not the truth that makes people happy and gives them what they want, but the real truth.

There’s such a thing as objective truth and it comes from a perfect and unchanging God. Love tells the objective truth. It does so as patiently and gently as possible, but it does so without flinching. Love does not apologize for the truth. Love will not amend the truth in order to spare someone’s feelings.

The sentiment in America today says that love is all about “equality”. If I love this or that person, I will make sure they have all the same rights I have. I will not deny them what they desire, because that would be discriminatory and mean. (The exception to this, of course, is the child in the womb. That person must never be granted equality or any rights whatsoever!)

Love does not apologize for the truth.

WDJS? (What did Jesus say?)
At times I’ve thought it would have been nice if Jesus, at some point in His three years of teaching, had stood on a hillside and proclaimed, “Amen, I say to you, homosexual sex is a sin. Two men cannot marry each other; two women cannot marry each other. Marriage shall be a covenant only between a man and a woman. Anything else, I tell you, is wrong and you shall not do it.” Or something like that.

At least then we could move past the “Jesus never said homosexual sex is sinful” argument. But He didn’t explicitly say those words. Does that mean Jesus is okay with homosexual sex and same-sex “marriage”? Hardly.

Sin never evolves into something righteous.

The same challenge is issued regarding abortion. “When did Jesus ever say abortion was wrong?” Well, in so many words, He didn’t. Are we to conclude that He had no opinion, or that He would say women have a “right” to abortion? Not so fast.

It’s a grave mistake, and usually a self-serving manipulation, to say that Jesus’ spoken words are the sum total of His teaching and the sole barometer for determining right and wrong. Jesus is The Word. His coming into this world speaks volumes about the will of God and the blessing of God and what God considers holy and right.

He did not descend from heaven a grown man (though He certainly could have), but God the Father sent His Son to be born of a woman. He began His earthly life unseen in Mary’s womb. He grew in exactly the same manner that each of us grew. He took on our humanity from its very single-celled beginning and declared it holy by virtue of His holiness.  Though Jesus had not uttered a word, yet He taught us that the life in the womb is sacred and human from the moment of conception.

God is purposeful and precise in all His ways.

He was born into a family.  If God the Father had chosen, Jesus could have been born to an unmarried woman, or He could have been left as a baby to be found and raised by two men or two women.  God is purposeful and precise in all His ways.  It is not an accident that God gave His Son into a family: husband and wife, father and mother.  This again is a deafening statement on the significance and primacy of the family.  God does not violate His own standards or His own laws.  Children are the fruit of marriage.  By His coming and His birth and His life, Jesus proclaims the sanctity of marriage between a man and a woman which forms the only proper foundation of the human family.

Without saying a word, He testifies to the Natural law, the plan for the human person, the holiness of human sexuality, the sanctity of life in the womb, and the nature of marriage.

It’s also significant that when Jesus wanted to shake things up, He didn’t abolish the moral law and say that this thing that used to be sinful isn’t sinful anymore — no, He actually tightened the moral law by upping the ante.  So, you say adultery is a sin?  Well guess what — I’m saying that if you even look at a woman lustfully you’ve committed adultery in your heart!  You’ve heard, ‘Love your neighbor and hate your enemy’, but I tell you to love your enemy!  You say you can give a certificate of divorce and all is well?  Well, I say anyone who divorces his wife and marries another commits adultery!

No ambiguity there!  He plainly reminded the people, God “created them male and female and said, ‘For this reason a man shall leave his father and mother and be joined to his wife and the two shall become one.’  So they are no longer two but one.  Therefore what God has joined together let no man put asunder.”  (Matt 19: 4-6)

You know, come to think of it, that sounds an awful lot like a declaration from Jesus that marriage only exists between a man and a woman.  Huh.

The truth is that God does not and cannot join together two men or two women in marriage because He created woman for man and man for woman.

The truth is that God does not and cannot join together two men or two women in marriage because He created woman for man and man for woman.  That’s how He designed it, and we have neither the power nor the authority to alter His design.  That is so plainly obvious, it’s absurd that suddenly saying so out loud qualifies me for the label of Hateful Bigot.

So… WWLD?
I love the truth.  I also desire to love my neighbor.  If loving my neighbor is determined by my willingness to discard what I believe is true, then I will surely come up short.  And I’m okay with that.  I reject the new prevailing definition of charity.

Love is not capitulation to someone else’s wants in order not to offend them.  Love bears all things, but it does not include all things.  Love does not take bitter for sweet and it certainly does not call evil good.  Contrary to current thinking, love does not treat all things equally.

Love cannot contradict God.  Since God does not change His mind about sin, I cannot love my neighbor by telling him a particular sin is now magically okay.  Sin never evolves into something righteous.  And here’s the thing — homosexual sex isn’t really a “special” sin.  It doesn’t require more of Christ’s blood than the sins of murder, adultery, stealing, or lying, for instance.  It is noteworthy because it involves a peculiar distortion of human sexuality, and a disordered expression of the sexual love that is the prerogative of marriage.  That’s what makes it so harmful to the human person.

Loving the truth does not mean I hate you.  I do hate the rising conflict and cultural upheaval being forced on us right now.  I do hate that human society as it’s always been is under threat of dismantling in order to create a new order based not on objective truth or right reason or the common good, but only upon individual wants and “evolving” rights.

I hate the damage being wrought on the family by homosexual activists who want to redefine marriage and sexuality for generations to come; by bullying activists and politicians who want to silence the Church and silence me, and set themselves up as the new moral authority.

I hate the perverse, insidious thinking that says human sexuality is a spectrum reality for people; that gender is some kind of fluid condition or continuum we travel, morphing as we go.

Come what may, I have no choice but to oppose with all my might the redefinition of marriage and the normalization of homosexual sex.  I won’t go quietly into this strange new world where marriage and human sexuality look like the twisted images of a carnival house of mirrors.  Love won’t let me do that.