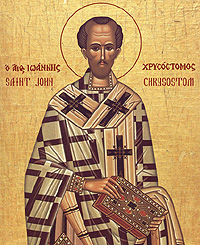 by John Stonestreet –
John Chrysostom, the archbishop of Constantinople in the fourth century, was an eloquent and fierce critic of the opulent life of the court. Unable to be muzzled, this dynamic advocate for social justice was finally brought before Emperor Arcadius, who demanded that he stop his bold preaching.

The exchange between these representatives of worldly and heavenly power is classic, recalling the dialogue between Pontius Pilate and Christ, who told the Roman procurator, “You would have no authority over me if it were not given to you from above.”

In the showdown between Chrysostom and the emperor, worldly power was put in its place once again. It’s an outstanding demonstration of the power of faith, one of the seven virtues which we’ve been celebrating here on BreakPoint. We’ve already looked at the four cardinal virtues—prudence, temperance, courage, and justice—critical for the people of God to possess at this key moment of history.

But faith is the first of the three theological virtues, which are gained only by the power of the Spirit. And it’s only through faith that God is pleased, the author of Hebrews says.

In Chrysostom’s encounter with the emperor, we see tremendous faith, and the power that comes with it. Arcadius first threatened this man of God with banishment if he did not stop preaching. “Sire, you cannot banish me,” Chrysostom answered, “for the world is my Father’s house.”

So the emperor replied, “Then I will slay you.” Chrysostom answered, “Nay, but you cannot, for my life is hid with Christ in God.” Then the emperor threatened to confiscate the archbishop’s personal wealth. “Sire, that cannot be, either,” Chrysostom replied. “My treasures are in heaven, where none can break through and steal.”

The emperor shot back, “Then I will drive you from man, and you will have no friends left!” Chrysostom calmly answered, “That you cannot do, either, for I have a Friend in heaven who has said, ‘I will never leave you or forsake you.’”

Emperor Arcadius could not silence the faithful witness of Chrysostom, so he banished him, first to Armenia, then to the remote outpost of Pityus on the Black Sea. Chrysostom died en route to Pityus, but his faithful testimony lives on as an example to Christians of every age ­­- especially ours.

faith is the assurance of things hoped for, the conviction of things not seen.

According to Hebrews, “faith is the assurance of things hoped for, the conviction of things not seen.” Skeptics have long derided faith as nothing more than wishful thinking. But they misunderstand what faith is. Faith isn’t a means of escape from the world; it’s trusting in the One whose world this is, whose power and plan is actually sovereign over and above all earthly powers.

Christians today need to follow Chrysostom’s courageous example, especially as we face the challenges to the sanctity of human life, marriage, and religious liberty as outlined in the Manhattan Declaration. Real faith won’t allow us to escape these challenges, but will empower us to confront them with courage, insight, and confidence in the One who made life sacred, defined marriage, and created us to be free.

Take a stand right now for these three essential societal building blocks by going to ManhattanDeclaration.org and signing it if you haven’t already.

While that step may pale in comparison to the faith of John Chrysostom before the emperor, believe me, it is just as counter-cultural, and just as needed. We must define our stand now, choosing convictions over comfort. We may be called on to make the sort of sacrifice these early martyrs did. That will take courage – the first virtue Chuck discussed in this series. And it’s faith, this week’s virtue, that bolsters that courage.