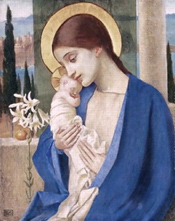 by Randy Sly –
Sacrifice is the great virtue of motherhood
Nothing speaks more highly to me of this self-sacrifice than the witness of a mother, who daily gives of herself for her own. Often depriving herself, she offers to others; often preferring others, she offers herself. Motherhood is a call to stay firm in the face of uncertainty, despair, sickness, poverty, and even danger, where her children are concerned. One could almost say that as the father is the sword, she is the shield. A mother lays down her life by taking it up on behalf of these precious ones entrusted to her care. …

Once upon a time there was a young woman who loved her Lord. There was nothing she withheld from Him. Her life was always “yes” to Him, the proverbial “fiat” – “let it be to me as you have said.” She fell in love and, hearing the “Divine Yes,” married the man whom she loved. They grew in Him as one in the sacramental mystery.

A child was born and she loved the child. The child brought something out of her that had always been a part of her yet never expressed. Like a hidden stream now discovered, rivers of love flowed out of the woman to her child. She knew she would do anything – yes anything – even give up her life for the precious one who lay in her arms. A special bond, which had begun nine months before, now burst forth with such fire and fervency that she knew nothing would ever be the same again.

The chance soon came to test this depth of love, not through her physical death, but through her dying to opportunities. Travel to exciting places, special events, intriguing people, all marched past the edges of her life while she maintained her watchfulness over the child. Her vigil would not succumb to the call of personal wants and affluence.

Soon more children were born into this woman’s life. The hidden stream was not divided, however. More love flowed as though her reservoir could not be quenched. Enough love for each where none could want for more.

Yet again, more tests came. Unyielding in her vigil, the woman knew that, whatever the lure, her place as mother must remain unyielding. She gave up herself, as she died to potential memories of what could have been. She chose to live in anticipation of the memories of what would be, for her and her family. She never looked back. She is my wife.

Shepherds come in many shapes and sizes. They are men and women, and even children.

Some shepherds are mothers. They tend the little flock called the domestic church along with their husbands, who are also shepherds of this field. Mother-shepherds nurture their children out of the goodness, the loveliness, the gentleness, and the winsomeness of womanhood in God’s image.

A mother lays down her life by taking it up on behalf of these precious ones entrusted to her care. She knows martyrdom in a way that no man may know it – giving up her life in childbirth and in childcare. No hireling can imitate or come close to matching a mother’s love.

Motherhood is a call to stay firm in the face of uncertainty, despair, sickness, poverty, and even danger, where her children are concerned. One could almost say that as the father is the sword, she is the shield.

Jesus also said, “I am the good shepherd; and I know my sheep, and am known by my own.”

A mother can describe her children to the minutest detail. Borne out of years of a loving gaze, each line and shape of her child remain fixed and firm as a portrait carried in the heart. She knows them inside and out; where each blemish is located, where each “owie” was bandaged, and how each mood is triggered.

Often the child is surprised by this knowledge, in awe that nothing really escapes a mother’s watchfulness. Everything is logged and categorized in a special place in the soul called “a mother’s care.”

St. Angela Merici was an orphan in the fifteenth century who devoted her life to children. “Mothers of children,” she wrote, “even if they have a thousand, carry each and every one fixed in their hearts, and because of the strength of their love they do not forget any of them. In fact, it seems that the more children they have the more their love and care for each one is increased.”

The mother is also known by her children. The sound of her voice can both soothe and sound the alarm. How often my children and I have heard people say to my wife, “You have such a wonderful and sweet voice on the phone. I couldn’t imagine you ever shouting.” My offspring would smile sweetly, for their mother’s voice was sweet and soothing, yet knowing that there were times when the alarm would sound!

They will also forever remember the “snap” – the perfected art of snapping her fingers for attention. In any public place and particularly at church, the “snap” could be heard – as loud as a thunderclap – calling wandering wills to return to behavior best suited for God’s house.

A mother’s treasure is her memories and her wealth is found in those ones whom she has nurtured through the years. No wonder Scripture states that Mary the Mother of God – the Blessed Theotokos – “kept all the things about her Son and pondered them in her heart.”

At the end of this section, our Lord also said, “Therefore My Father loves Me, because I lay down My life that I may take it again.”

St. John was truly impacted by this awesome declaration and wrote in his first epistle, “This is how we know what love is: Jesus Christ laid down His life for us. And we ought to lay down our lives for our brothers.”

Nothing speaks more highly to me of this self-sacrifice than the witness of a mother, who daily gives of herself for her own. Often depriving herself, she offers to others; often preferring others, she offers herself.

An account like this one about mothers must be shared with caution. For some, motherhood was an accident, and not always a welcome one; for some, biological motherhood isn’t possible, and this day is a reminder of what may not be; for some, mothers weren’t all that nice, and this day carries different memories; for most, motherhood, even under the very best of circumstances, is still less than a bed of roses and the primrose path.

Yet, apart from all personal experience, the calling of motherhood remains before the Lord as a noble state of being to be honored and embraced. As one person wrote, “for all its stumbling blocks, pitfalls and broken dreams, for all the soiled diapers, soiled wallpaper and spoiled plans, we’re talking about a beautiful ideal, a natural part of God’s creative plan to bring love and caring to light (to life).”

1 thought on “Motherhood is a Life Given Up in Love”