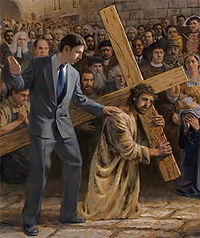 by Seth Adam Smith –
The Via Dolorosa features over 100 figures–men and women that have left their footprint on Christianity. The man in the middle represents the modern Christian…a man who must make a choice. It takes courage to be a Christian in today’s society.

The man in this painting, puts his hand on the shoulder of Christ because Jesus is the source of his strength. The man holds up his right arm as if to say, “Be still, for I know that Jesus is the Christ!”

Says Jon McNaughton, “I got the idea for this painting as I walked through a street in Jerusalem called the Via Dolorosa. This is the road where traditionally Christ carried his cross about 2,000 years ago. I thought to myself: ‘If I had been alive then, would I have watched from a comfortable distance or would I have come to His defense?’

Today, true Christians are the most persecuted people in the entire world. Yet many of us stand idly by as we are mocked and persecuted for what we know to be true.

“I wonder,” continues Jon McNaughton, “if Christ were on the earth today, would the world want to crucify him again? Would you stand up for the truth and testify that he is Jesus the Christ? As true Christians, we must not fear to speak the truth, even if it means we have to stand alone in the world.”

When all is said and done, where will you find yourself standing on The Via Dolorosa? 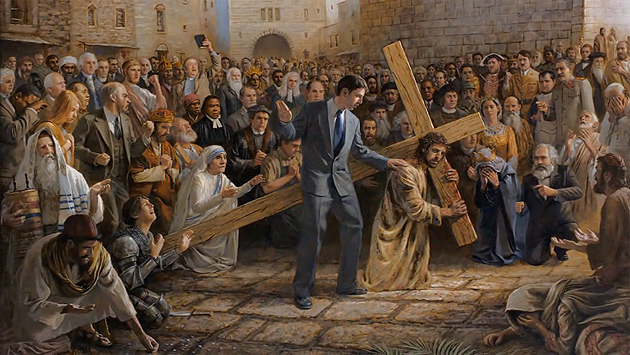