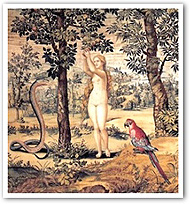 by Anthony Esolen –
A small town in Vermont has recently been ordered to cease its immemorial tradition of opening meetings with a prayer. …
The order came from a judge who does not live near. A public school in the city where I am writing these words has banners hanging from its gymnasium ceiling, one of which featured a prayer written by a student of the school many decades ago. It has been removed, also by order of a distant judge. Since the citizens of the town and the school district no longer govern themselves but have become dependent upon regular infusions of green federal blood, they could not reply, “You and whose army?” The prayer and the banner are gone.

We Catholics hold that man, unique among creatures on earth, finds his fulfillment only in what transcends him. He will not compose symphonies in honor of a good housing market. He does not whistle an air for low inflation. He will pen poetry born of love, but if the object of his love is a Clodia rather than a Beatrice, even his love poetry will degenerate into satire and cynicism. Man is made for God. That marks both his duty and his glory. Therefore any attempt to sever man from his devotion to God is an attack upon man’s soul. It reduces man to a counter in an economic or political game, a consumer of creature comforts, or a competitor for wealth and prestige.

The argument of the aggressors in this case is indirect and sly. It is the argument of the serpent in the garden, who suggests to Eve that she can only be like God by being free from the laws of God. That casts God as the arbitrary inhibitor, and Satan as a patron of liberty: the Lucifer to whom Saul Alinsky dedicated his Rules for Radicals. Religion, moreover, is supposedly divisive. But if we take the trouble to look about us we will see that true religion unites, and that it is this very unity, both human and divine, which the aggressors despise.

Man is made for God. That marks both his duty and his glory.

The poet Milton understood the principle well. Even before Satan lies to Eve about the forbidden fruit, he tries to separate her from her love: for the creatures with which she shares the earth, for her husband Adam, and for God. The beasts, the serpent sneers, are “shallow to discern” half of what in her is lovely. Her beauty is wasted on them, and though there is one man who can appreciate her, “what is one?” She should instead be gazed upon “by angels numberless,” her “daily train.” Sure enough, once Eve eats of the fruit, her mind is clouded, and she calls God “our great Forbidder,” and considers whether she should go on to tempt Adam likewise. After all, she reasons, if she should suffer the penalty of death alone, then Adam would have to take another Eve, and the very thought is intolerable to her.

So Eve does invite Adam to share her newfound liberty, which is but newly forged bondage. He consents, and completes the original sin. What Milton has the wedded pair do next is fascinating. But to see just what irreligion has to do with inhumanity, we should recall the profound humanity Adam and Eve enjoyed when they adored and obeyed God.

Milton has made a point, all through the poem, of their beautiful and innocent nakedness. This is how Satan — and we — first encounter Adam and Eve:

Two of far nobler shape, erect and tall,
Godlike erect, with native honor clad
In naked majesty seemed lords of all,
And worthy seemed, for in their looks divine
The image of their glorious Maker shone:
Truth, wisdom, sanctitude severe and pure,
Severe, but in true filial freedom placed.

And after Satan eavesdrops upon a conversation that all true young lovers have — when and how they first met — he, the hate-filled voyeur hiding behind the trees, witnesses a tender physical expression of their love:

So spake our general Mother, and with eyes
Of conjugal attraction unreproved
And meek surrender, half embracing leaned
On our first Father, half her swelling breast
Naked met his under the flowing gold
Of her loose tresses hid.

Sight hateful, sight tormenting! Thus these two
Imparadised in one another’s arms,
The happier Eden, shall enjoy their fill
Of bliss on bliss, while I to Hell am thrust,
Where neither joy nor love, but fierce desire,
Among our other torments not the least,
Still unfulfilled with pain of longing pines.

On the fateful morning of the temptation, Adam recommends that he and Eve stay close together because of their prowling enemy,

Whether his first design be to withdraw
Our fealty from God, or to disturb
Conjugal love, than which perhaps no bliss
Enjoyed by us excites his envy more.

The conjunction “or” is meant to cast as alternatives what are actually the same thing: to withdraw our fealty from God is to disturb conjugal love. More than that: it is to disturb all forms of human love. It is to plant self-will and reap alienation.

Hence, after Adam and Eve have sinned, the first thing they do is to mimic that conjugal love. It is the first intrusion of lust, of reducing another human being to an object of sexual appetite. Wearied by the amorous play that is the seal of their mutual guilt, they fall asleep; when they wake, as from unrest, they

Soon found their eyes how opened, and their minds
How darkened; innocence, that as a veil
Had shadowed them from knowing ill, was gone,
Just confidence, and native righteousness,
And honor from about them, naked left
To guilty shame: he covered, but his robe
Uncovered more.

Now indeed they are naked. The virtues that once clad them like royalty have been stripped away. We must now hide our motives from one another and even from ourselves. We cover up, and in doing so we reveal our terrible poverty. Do Adam and Eve find at least a sad comradeship in sin? Hardly. Before they repent — we should say, before the shadow of the cross of Christ falls across their path — they do nothing but blame one another. We might well apply Milton’s judgment to every single secular endeavor untouched by grace: to political parties, social classes, suspicious nations, business rivals, and men and women glaring at one another in court:

Thus they in mutual accusation spent
The fruitless hours, but neither self-condemning,
And of their vain contest appeared no end.

There it is, the secular world in miniature: no true society at all. Does worship of God divide men? It is rather the one thing that most surely unites them. The secular lie, that most wars have been fought over religion, is so manifestly false that we might well consider it the result of demonic activity, as when seemingly sensible people are hurled into mass demonstrations of madness. The ancient Greek city states fought one another constantly; about the only time they didn’t fight was when they gathered at Olympia or Delphi to celebrate games in honor of the gods. The ancient Romans systematically conquered their neighbors in Italy and then extended their rule over the whole Mediterranean, but they were notably tolerant, even supportive, of religion. That was one thing they didn’t fight about, until, in sporadic bursts of totalitarian feeling, they began to hale Christians off to die in the arena.

With the significant exception of Islam, almost every war fought in the west over the last five thousand years has had nothing to do with religion, and everything to do with those secular things that men fight for: power, glory, revenge, wealth, land. What did religion as such have to do with the Revolutionary War, the War of 1812, the Mexican War, the Civil War, the Spanish-American War, World War I, World War II, the Korean War, and the Vietnam War? What did religion have to do with the Napoleonic Wars, the Crimean War, and the Boer War? What did it have to do with the Franco-Prussian War, or the Russo-Japanese War? Even the Crusades would never have been fought, if the Turks had not swept into the near east, slaughtering and conquering, feared by both the Byzantine Christians and the Baghdad Muslims whose lands they seized. Instead, if we want to identify the real instigator of war, we need look no farther than the secular man who wishes not to worship God but to have the power of a god: Napoleon, Bismarck, Garibaldi, Kaiser Wilhelm, Lenin, Trotsky, Stalin, Hitler, Tito, Mao, Idi Amin, Kim Jong-Il.

But when I join with my fellows in the worship of God, there above all do we break out of our lean and hungry selfishness. To kneel beside another person — an old man beside a little child, a janitor beside a professor, a woman who struggles with the sin of envy beside a woman who is the cause of envy in others, a college graduate beside a dropout, a gangly boy beside a woman who shakes as she takes the host — this is a communion the secularist can never know. And when a Christian man and a Christian woman manage to reject the snaky whisperings of lust, and seal their mutual love on the night after they have said before God and man, “I am yours forever,” they know a joy that is to the aged weariness of pleasure-seeking as the heavens above are to their reflection in a puddle. Sight hateful, sight tormenting!