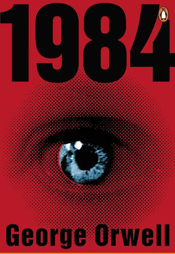 by Cindy Simpson –
“Thoughtcrimes” — opinions and ideas that oppose the status quo — were pursued and punished by the Thought Police in the future world described by George Orwell in his novel, Nineteen Eighty-Four.  Could politically incorrect thought be declared illegal — a type of “hate” crime against individuals or the State — someday in America?  Since much of Christian thought seems to be considered politically incorrect these days, might it also be declared hate speech?

What did Cameron say to deserve Curry’s “attack”?  When, a couple of weeks earlier, the actor was asked his views on gay marriage by CNN’s Piers Morgan, Cameron, within a much longer answer, made these particular statements: “I think that it’s unnatural.  I think that it’s detrimental and ultimately destructive to so many of the foundations of our civilization.”

Morgan immediately shot back that he found Cameron’s views “destructive,” but Curry instead wandered down the lofty road of imagined consequences when she asked Cameron: “Do you feel any responsibility saying words like that, that might encourage people to feel that it’s okay to treat — mistreat gay people?”

Cameron never even used the word “hate,” yet Curry asserted that “many people are suggesting that this is hate speech.”  Then she asked Cameron, “Are you encouraging people to feel hate towards gay people?”

And there you have it.  The futuristic sci-fi plot laid out, in real life, in March of 2012 on NBC:

Although Curry didn’t complete the plotline by mentioning the word “crime,” this wasn’t the first time she read from a similar script.  Last September, reporting on the suicide of a gay teen, she fretted: “Do you think our churches, our politicians and other adults who adhere to an anti-gay message enable some of this hate?”

The consequences of the Curry/Cameron exchange were not lost on Nolte:

What Ann Curry did to Kirk Cameron this morning is the first phase of that war [on the Christian Church]: The shaming campaign. On national television she brought the actor on to declare his religious beliefs hate speech that will encourage others to “mistreat gay people.”

We all know what the next step is, and that’s the outlawing of these opinions under the principle that the speaking of such things will cause harm to others.

This, of course, would mean the end to the church — which is the whole idea.

Glenn Beck’s recent program focused on what he also sees as an assault on the church, covering the atheist “Reason Rally” and other events supporting his claim that Christians and God are “under attack.”

GLAAD argues that LGBTs are under attack, and the organization has published an “accountability list” of Christian commentators who use “violent anti-LGBT rhetoric” and express “extreme animus towards the entire LGBT community.”  Prominent Christian activist and founder of Prison Fellowship Chuck Colson wrote this about being included on that list:

[GLAAD’s] definition of “gay bashing” is skewed. For them, anything short of renouncing the historical Christian teaching on sexuality is akin to hate. If I say that homosexual sex is a sin, they say I’m hateful. Yet I also say that pre-marital sex is a sin, as is drinking too much. Is that hateful, too?

Dear Miss Manners recently sided with a reader who “politely” labeled certain politicians’ opposing views on gay marriage as “abhorrent,” “bigoted,” and demonstrating a “lack of intelligence.”  At least Miss Manners was also too polite to use the hate-word or infer that the politicians’ opinions would encourage violence, although others in the mainstream have characterized religious opposition to Obama’s contraceptive mandate as a “war on women.”

The early Christians were not persecuted for their “religion” but for being “enemies of the State”. They were charged with “odium humani generis” [hatred of the human race]. We are witnessing contemporary Catholics and other Christians being accused of creating a climate of “hate” in much the same way.

The Roman historian Tacitus recorded the accusation of “hate” by the Christians during a time, as described by Fournier, when Romans “practiced primitive forms of abortion as well as ‘exposure,’ the killing of unwanted newborns” and “sought to make [homosexual] relationships normative.”

In a highly volatile nutshell that seems to have existed for over 2,000 years, we have Christians who are inspired to speak what they feel is God’s truth in love, opposed by those who claim that Christians’ words are hate and incite harm.

The power of words was examined in a previous column on American Thinker, which noted that whoever is the master of words wields great power over the narrative of our nation and the slant of its conversation.

“With the exception of Catholics and others in the religious community that closely follow such issues, few people took note of the Obama administration’s rhetorical shift from ‘freedom of religion’ to ‘freedom of worship’ in 2010,” observed columnist Ken Connor in his analysis of the implications of the contraceptive mandate.

Is there a distinction?  The shift, while consisting of only one word, “moves [religious] dialog from the world stage into the physical confines of a church,” argued Catholic Online editor Randy Sly.  The significant difference in meaning was also noted by Chicago’s Francis Cardinal George:

Liberty of religion is more than freedom of worship. Freedom of worship was guaranteed in the Constitution of the former Soviet Union. You could go to church, if you could find one. The church, however, could do nothing except conduct religious rites in places of worship — no schools, religious publications, health care institutions, organized charity, ministry for justice and the works of mercy that flow naturally from a living faith. All of these were co-opted by the government. We fought a long cold war to defeat that vision of society.

Yet the war of words in the battle to protect the freedom of religion continues.  Nolte viewed the contraceptive mandate as a “dry run” “to force a left-wing agenda on the church,” and Connor saw the mandate as an intentional “bait and switch” in an “unprecedented attack” that advances “a left wing ideology that is increasingly hostile to religion”:

Indeed, there are some who believe that President Obama’s true motive has less to do with birth control and more to do with government control, sending the message that it is not God but the State that is the final authority on questions of personal conscience and morality.

Apparently, the politically correct view (for the time being) is that it is fine, commendable even, to be a Christian and attend church on Sundays — but during the rest of the week and outside the church, Christian doctrine is tolerable only when it advances the progressive definition of correctness.  Even symbols hanging on the outside of the church’s walls have been deemed “too offensive” — at a worship tent in a U.S. military base in Afghanistan, the cross was banned from display; this week, the gay pride flag flew over the base.

Commentators defend Obama’s avowed Christian faith, but then they fret that other openly Christian politicians, if elected, might impose some sort of theocracy.  While the example and leadership of the president in religious matters is important, the much greater power of the establishment and mainstream media over the control of our nation’s narrative cannot be ignored.

Our nation’s founders held “a firm reliance on the protection of Divine Providence” and appealed to the “Supreme Judge of the world,” declaring that we are endowed with certain unalienable rights by our Creator.  A couple of hundred years later, do Americans instead look to the government as the giver and definer of our rights and judge of our thoughts?  Is Big Brother the final authority?

Although it may seem as though our actions, our words, and even our thoughts are increasingly being watched by the State, there is one thing — the most important thing — that Big Brother cannot control: the faith that God is even bigger and is watching over everything.