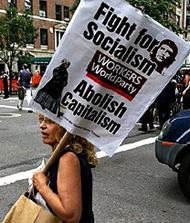 by Steve McCann –
Much has been made of the precipitous decline in the level of discourse in the United States. Many attribute this to the coarsening of the language and the ever-widening gulf between the various factions in the political spectrum. However, these factors are a symptom of a current underlying and foundational dilemma: the inability of not only the general public, but nearly all of the so-called societal leaders and opinion-makers to generate an original thought, as well as a stubborn refusal to use reason and logic when confronted with irrefutable facts and arguments.

These traits can be explained, insofar as the general public is concerned, as the consequence of their subjection for the past forty years to a woeful and deliberately incomplete education bordering on indoctrination. However, this factor does not fully explain many of the so-called best and brightest falling into the same abyss and being unable to coherently expound on an original thought or concept. While this is true for a few on the conservative side of the political spectrum, it is overwhelmingly the case among those who self-identify as liberals or progressives.

Those who publicly espouse the statist philosophy do so in age-old and threadbare platitudes. The depth of thought rarely exceeds three basic tenets: 1) capitalism and individual wealth accumulation are evil; 2) only an economy and society dominated and controlled by a powerful central government can guarantee fairness of outcome; and 3) anyone who disagrees with 1 and 2 is dangerous, ignorant, and not only greedy, but tyrannical and thus must be relegated to the ash heap of society.

Failing to understand that these tenets have been in existence since the late 1840s, the current proponents act as if they have discovered some new and overwhelmingly successful concept. The failure of those nations that chose to go down this road is conveniently ignored or mired in blissful ignorance. Mindlessly defending American progressivism is all that matters.

This is most evident when the advocates of this errant viewpoint appear on television or the radio to debate or discuss the issues of the day. Whenever conveniently among their fellow-travelers, every conversation immediately degenerates into a creative name-calling or false accusation exercise aimed at any and all on the right who vehemently disagree with the left and their stewardship of the country.

These true-believers never offer any new ideas or concepts on how to improve the lot of the people except to expand government. How or why government bureaucracies coercing additional trillions of dollars from the marketplace and spending it as they see fit would make life better when it has not worked in other countries is not discussed, as that question cannot be answered and is thus ignored. What is not ignored is the unwritten marching order to regurgitate a well-worn script, also conceived in the late 1840s, to undermine, demean, and destroy those who actively oppose the progressive agenda.

Whenever these same proponents appear with the conservative opposition, a pre-programmed recording is switched on. This consists of: Barack Obama is doing a great job considering he inherited the worst situation since the Great Depression; the nation needs to spend more money to solve any and all problems while raising taxes on the evil rich; conservatives are callous and care little for minorities, women, and children; and any overt criticism of President Obama is a subtle expression of racism. When called out on these points and confronted with irrefutable facts, the recording is switched on again and repeated as often as necessary.

This is a manifestation not only of mind-numbed robotic incompetence, but, more importantly, of the necessity of those who traffic in these banalities to be part of what they perceive to be the in-crowd and the absolute necessity to stay in the good graces of the governing class which is predominantly liberal, with access not only to government largess, but to ego-gratifying mainstream news and entertainment media attention. This subservience requires no independence of thought or the ability to generate an original idea. Being a mindless foot soldier for the cause maintains an emotional attachment to the elites.

At the top of the pyramid are the liberal elites in government, academia, and the media/entertainment complex. While they may sit in think-tanks, government offices, newsrooms, and faculty lounges, regaling each other demonstrating who may be the smartest in the room, they too are essentially incapable of initiating an original thought or having any independence of mind. In the realm of political theory, the only accepted and promulgated ideology is that of an all-powerful central government controlling the day-to-day lives of the ignorant American populace — a premise that will succeed where others have failed if they, the elites, are given full and unfettered access to the corridors of power in Washington, D.C.

These current leaders of the movement, as personified by Barack Obama, are incapable of admitting any error in their thinking, as they have spent virtually their entire lives in the company of the like-minded. Thus, their superiority to the unwashed masses is unquestioned, and their ability to govern is beyond dispute. Unfettered narcissism is a prerequisite for those who espouse socialist/progressive ideology.

The majority of the American people, asleep during the past sixty years of overwhelming peace and prosperity, are gradually waking up to the massive deception that has been perpetrated by the left and their inability to solve the almost insolvable problems they, in large part, have created. Thus, the tone and nature of political discourse has become more strident, as the left, in an effort to protect their gains, status, and self-image, will do or say anything regardless of the damage it may inflict on the country.

Over the past fifteen years, the intellectual pendulum in the United States has dramatically swung back to those who espouse the tenets of individual freedom as well as free-market capitalism. The phenomenal success of conservative think-tanks, talk radio, and websites, and the domination of the bestseller lists by not only current conservative authors such as Mark Levin and David Limbaugh, but also by historical figures such as Friedrich Hayek reflect this seismic shift. With the awakening of the American people and the requisite defeat of Barack Obama as well as the left-dominated Democratic Party in November 2012, the nation can embark on bridging the political gulf and begin to dispatch permanently the failed theories, vitriol, and demagoguery of the self-described progressives.