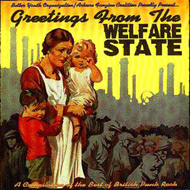 Leftists promote entitlement programs as necessary to meeting essential human needs, and there’s an element of truth in their position, for there are essential human needs. However, leftists omit a key fact. There exists no right to receive life’s essentials at another person’s expense.

Fifty years’ worth of war on poverty has produced little benefit, save for a few valuable lessons.  For instance, we’ve learned about the valiant struggle the disadvantaged wage against capitalist oppression.  The homeless, the hungry, and the downtrodden are victims of free-market greed.  But there’s one participant in Washington’s war on poverty who’s routinely ignored, one whose plight the pointy-headed elites never champion: the working chump.

Lest anyone get the wrong idea, working chumps are identified not by their intellectual prowess but by their productivity.  Their status ranges from the professional to the tradesman, the rich to the poor.  Such people are driven to meet their own needs and become agitated when others shun that responsibility.  While such productive people represent a declining socioeconomic class, they are indispensable.  The entitlement wagon is overloaded with passengers who favor the free ride.  Did someone not pull that wagon, it would stall.  No one would get what they need, much less what they want.  Working chumps are the mules who pull the wagon.

Leftists promote entitlement programs as necessary to meeting essential human needs, and there’s an element of truth in their position, for there are essential human needs.  However, leftists omit a key fact.  There exists no right to receive life’s essentials at another person’s expense.

Voluntarily contributing to a neighbor’s well-being is charitable. Being forced to provide for another’s needs is a form of servitude.

Voluntarily contributing to a neighbor’s well-being is charitable.  Being forced to provide for another’s needs is a form of servitude.  How else can we describe people who are forced to relinquish their property — expressed as the return on their labor — for their neighbors’ personal benefit?  Just as charity isn’t a vice, forced contribution isn’t charity, even when the needs of the “entitled” are life’s necessities.  How much more when entitlement extends from essentials to convenience?

Perhaps you’ve heard of Assurance Wireless?  If not, it’s a program that provides clients with 250 minutes of free cellular service each month.  More talkative Assurance customers can receive 500 minutes for $5 a month, and 1,000 voice minutes plus 1,000 text messages for $20 a month.  But there’s a flaw: Assurance isn’t free.  Someone must subsidize the free or reduced rates.  That someone is the working chump.

Assurance is funded through the federal Universal Service Fund (USF).  Basically, the USF is a tax that appears on phone and wireless bills.  In theory, this tax is collected from communications companies to ensure affordable telecommunications services in remote or high-cost areas.  In reality, customers pay the USF.  Therefore, the working chump who pays the USF tax is subsidizing yet another welfare program.

Now, labeling Assurance Wireless a welfare program is a stern accusation, one in need of substantiation.  Fortunately, confirming evidence is readily available.  Qualifying for Assurance is as simple as participating in an approved entitlement program: Medicaid, food stamps, Temporary Aid to Needy Families, public housing, free school lunch, or low-income energy assistance programs.  If it walks like a duck and quacks like a duck, it’s a duck.  Likewise, when a program’s qualifying criterion is participation in a welfare program, and the program’s cost is covered or subsidized through government imposed taxes or fees, it’s a welfare program.

Successful cultures aren’t built upon the premise that unproductive people have the right to necessity or convenience at others’ expense.

The economy isn’t technically in recession, but it’s far from robust, causing many productive families to trim their budgets.  One way to stretch their dollars is through no-contract, or prepaid, cellular plans.  While prepaid cellular options sometimes are limited, they are affordable.  However, prepaid cellular customers work not only to maintain their limited services, but also to provide the entitlement class with better cellular plans than they themselves can afford.  Productive people are being played for chumps — working chumps.  Count me in their number.

Successful cultures aren’t built upon the premise that unproductive people have the right to necessity or convenience at others’ expense.  But more and more Americans perceive themselves entitled.  Whether it’s necessities like food and shelter or luxuries like cellular phones, working chumps continue to meet the demands of an ungrateful entitlement class.

The government, media, and intelligentsia are quick to defend those who ride in the entitlement wagon.  Yet no one defends the working chump, whose productivity keeps that wagon rolling.  The chumps can’t pull the load forever.  Someday the weight will become too great, and both the wagon and its riders will be left sitting by the side of the road.