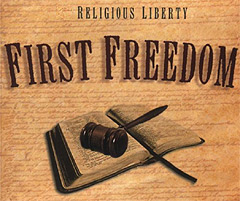 by Chuck Colson –
I’ve been talking a lot lately about the Obama Administration’s relentless attempts to restrict religious freedom.

You know by now that the Catholic bishops have strongly rejected the president’s so-called “accommodation” to exempt religious organizations from paying for abortion-inducing drugs, contraception, and sterilization.

Good for the bishops. What the president outlined changed nothing: religious organizations will still have to provide insurance that covers services that violate their religious beliefs, even if they don’t have to pay for them directly.

Now why does this matter? Why is it really such a big deal? The Administration is hoping you will think this is all about contraception, which not many people, even the majority of Catholics, care that much about. But this is not about contraception. This battle is all about religious freedom—the first and most important of all our freedoms.

As Christians, we know that freedom is the natural condition of human beings because we were created in God’s image. God, who enjoys perfect freedom, respected Adam and Eve’s freedom in the garden.

Even the Deist Thomas Jefferson, author of Virginia’s statute of religious freedom, wrote that “Almighty God hath created the mind free.” Jefferson rejected “all attempts to influence it by temporal punishments or burdens, or by civil incapacitations.” And he recognized that although “the Holy Author of our religion” had the power to constrain freedom, He chose not to. And to restrict religious freedom was a “departure from” God’s plan.

Our founding fathers—even those who weren’t Christians—believed, as I do, that without freedom of religion and freedom of conscience, all of our other freedoms aren’t worth the paper they are written on. If government can dictate what we may or may not believe, or how we may or may not live out our beliefs, then we are no longer a free people.

I say this not just because I am a Christian: I say it as a student of the American founding. I can plainly read what the founders said. James Madison, the fourth president and “father of the Constitution,” believed “that religion or the duty which we owe to our Creator and the manner of discharging it, can be directed only by reason and conviction, not by force or violence”—and not by the “dictates of other men” or by “Civil Society.”

It’s shocking that the leaders of our nation so callously disregard our history, our heritage, our rights. We must not remain silent. We must speak out—reintroduce our neighbors and our leaders to the foundational beliefs of the American Experiment.

Today, on my “Two-Minute Warning,” which I urge you to watch at ColsonCenter.org, I will invite you to attend our “Break the Spiral of Silence” conference, which will be held at a retreat center near Washington, D.C. Come, learn, join with me and a host of great speakers, including Joni Eareckson Tada and Eric Metaxas. We aren’t going to remain silent while our most precious freedom is in danger. Again, that’s at ColsonCenter.org.

Okay, governments do restrict and do deny freedom of religion. But those that do are not called free democracies. They are called authoritarian dictatorships, which is exactly what we will be living under if we lose this fight.