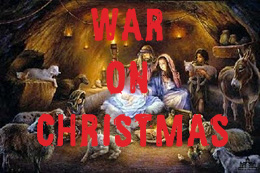 by Mark D. Tooley –
The multiculturalist Left wants to dilute Christmas into a vacuous, stern celebration of Winter, divorced from culture and religion. Not content with banning crèches, trees and carols, anti-Christmas zealots are often even threatened by Santa Claus. The transcendent authority behind Christmas, even in its commercialized form, is an unwanted challenge to the Left’s preference for all authority vested in the state and its secular clerisy.

Fox News has delighted in lampooning the ongoing absurdities of the “War on Christmas,” which sometimes even include banning green and red from classrooms. The American Family Association, a para-church group, has also challenged the anti-Christmas campaign by affirming companies that affirm Christmas.

“The Fox News Christmas proffers the constant drumbeat of war, the reliance on military solutions to every conflict, the demonizing of our enemies, and the gospel of American dominance,” insists Evangelical Left activist Jim Wallis of Sojourners at his most rhetorically lugubrious.

A colleague of Wallis at Sojourners has even labeled Fox News the “Headquarters of the Lord’s Resistance Army against the War on Christmas.”

Although this colleague noted that anti-Christmas crusaders were even warring against the display of Poinsettias, Wallis is still blind with rage against his least favorite cable network: “The Fox News Christmas heralds the steady promotion of consumerism, the defense of wealth and power, the adulation of money and markets, and the regular belittling or attacking of efforts to overcome poverty.”

Wow, who knew that Christmas, as supposedly defined by Fox News, is so cosmically evil?

Wallis claims that Fox is leveraging its “War on Christmas” campaign to discredit “atheists, agnostics, liberals, leftists, progressives, and separation of church and state zealots — i.e. Democrats.” The long-time activist for leftist causes, and recipient of George Soros philanthropy, has his own politicized definition of Christmas. Jesus was born in an “occupied country” under an “imperial power,” adding “political context” to the Christmas season. “In Jesus Christ, God hits the streets,” Wallis announces. “That Jesus was born poor…radically defines the social context…and clearly reveals the real meaning of Christmas.” Wallis rejoices that Jesus will “end our warring ways.”

Of course, Wallis’ 40 year career of religious and political activism reveals his understanding of Christianity as a protest movement against American imperialism, a demand for coercive wealth redistribution, and steadfast pacifism. In contrast, the defenders of traditional Christmas understand it as a celebration of a divine savior come to save a sinful world. The Religious Left is usually too busy for salvation, and largely thinks only wealthy imperialists are sinful.

Wallis insists “making sure that shopping malls and stores greet their customers with ‘Merry Christmas’ is entirely irrelevant” to the birth of Jesus. Instead, the “consumer frenzy” is the real “blasphemy,” citing $450 billion reputedly spent on Christmas. Has Wallis pondered how many millions of poor people around the world are probably employed producing goods for Americans selfishly celebrating Christmas? And is a holiday centered on gift giving really the most sinister use of money?

Even taking a swipe at Christmas trees, Wallis denounces them and other greenery as “borrowed from ancient Roman and Germanic winter solstice celebrations, assimilated and co-opted by the church after Constantine made peace between his empire and the Christians.” So there you have it. Christmas hoopla is actually the idolatrous fruit of Constantinianism, the ultimate bugaboo for pacifist Religious Leftists.

Wallis somewhat resembles the old English Puritans who forswore Christmas as a papist holiday without roots in Scripture. But at least the Puritans believed in a transcendent power beyond government and rejected utopia. They industriously created their own wealth and did not demand entitlements from others. Wallis cites the Magnificat from the Virgin Mary, which foresees Jesus having “lifted the lowly…and sent the rich empty away,” and which he sarcastically comments Fox News would condemn as “class warfare.” Then Wallis concludes: “So if there is a war on Christmas it’s the one being waged by Fox News”

Who are the “lowly” and who are the “rich?” Fox News watching working class shoppers at Wal-Mart who prefer “Merry Christmas” over “Happy Holidays” may indeed better qualify as “lowly” than the multiculturalist elites ensconced in the commanding heights of culture who sneer against religion and cultural traditions.

A pastor and religious editor blogging for the Huffington Post echoes Wallis’ suspicions of popularized Christmas celebrations. Rev. Skye Jethani berates Christmas as a “holiday of dubious origin,” that the Puritans “correctly” thought was a “pagan festival now masquerading as a Christian one.” He faults Santa Claus for becoming a “marketing juggernaut for retailers” who touted Christmas for profits. And Rev. Jethani laments that “conservative Christians” who defend Christmas merely illustrate their own sad “captivity to consumerism.” So bah humbug!

Maybe the holier than thou Religious Left purists can escape all the American consumerist nastiest by slipping down to the closest Occupy Wall Street demonstration on Christmas morning to drink free trade coffee. But most Americans, along with hundreds of millions around the world, most of whom are quite poor, prefer robustly to celebrate a Christmas full of “dubious” cultural symbols and even some lavish gift giving among family and friends. To all of the unsophisticated consumerists, rich and poor, who choose tradition over elitist snobbery: Merry Christmas!