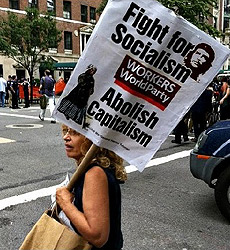 by Charles Gasparino –
The standard portrayal of the Wall Street protesters goes something like this: Ragtag group of unemployed young adults, venting often incoherent but overall legitimate populist outrage about economic inequality. But go down to the movement’s headquarters, as I did this past weekend, and you see something far different.

It’s not just that knowledge of their “oppressors” — the evil bankers — is pretty thin, or that many of them are clearly college kids with nothing better to do than embrace the radical chic of “a cause.” I found a unifying and increasingly coherent ideology emerging among the protesters, which at its core has less to do with the evils of the banking business and more about the evils of capitalism — and the need for a socialist revolution.

It’s not an overstatement to describe Zuccotti Park as New York’s Marxist epicenter. Flags with the iconic face of the Marxist revolutionary Che Guevara are everywhere; the only American flag I saw was hanging upside down. The “occupiers” openly refer to each other as “comrade,” and just about every piece of literature on offer (free or for sale) advocated socialism in the Marxist tradition as a cure-all for the inequalities of the American economic system.

Don’t try to explain to any of these protesters how those who sought to create a Marxist utopian dream of revolution also gave us the Stalinist purges, Mao’s bloody Cultural Revolution and many other efforts to collectivize thought in the name of economic “justice.”

One woman was holding a “Nationalize the Federal Reserve” sign; I tried to explain that the Fed is already nationalized, because it’s part of government, and she told me to “go check my f–king facts — it’s privately owned.”

That’s when I was handed a piece paper offering the following wisdom: “The Game of Capitalism Breeds Dishonest Men.” The author of such deep thinking was a dude named De La Vega, an artist convicted a few years back for painting graffiti on a warehouse in The Bronx.

That was pretty mild compared to the sentiments offered in the official “Statement of the League for the Revolutionary Party” on the protests. These guys view as the enemy not just Wall Street tycoons, but also liberal labor leaders like Richard Trumka of the AFL-CIO.

The problem with Trumka, according to the Revolutionary Party and its Zuccotti Park contingent: He wants to work with wishy-washy Democratic Party politicians, where the true revolutionaries want to “defend and develop Marxist theory as a guide to action,” which is the protests’ real purpose.

Maybe the worse-spent dollar I have ever spent in my life was on a propaganda broadsheet titled “Justice,” which advocates “Struggle, Solidarity, Socialism.” On the front page of the newspaper-like document, beneath the headline “Capitalism: System Failure,” was a tease for a story on the economy and how “influential business economist Nouriel Roubini” recently said how “Karl Marx had it right. At some point, capitalism can destroy itself.”

Yes, the left-leaning Roubini made that fatuous statement, and many similar ones — so many, in fact, that he has lost much of his credibility in financial circles, though that didn’t quite make it into the “Marx Was Right!” story.

Also absent was any notice of how the much-hated banks benefited not from free-market capitalism, which would have let them fail in 2008, but from crony capitalism that bailed them out. The similar cronyism practiced by Trumka and the Obama administration — massive spending on useless but politically connected businesses like Solyndra, paired with class-warfare rhetoric — likewise has very little to do with free markets.

I don’t advise going down to Zuccotti Park to have a serious conversation with the protesters, given their growing propensity toward violence and the growing revolutionary tone of the movement. But I would suggest that President Obama might want to put a hold on his support for the Occupy Wall Street movement as his 2012 re-election bid approaches.

If he keeps saying nice things about the protesters, the debate among business types and voters won’t be whether the president has some socialist leanings, but how much virtue he sees in the thoughts of Karl Marx.