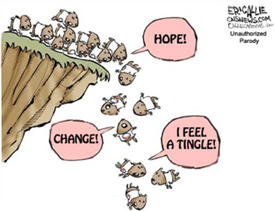 I’ve only recently come to realize the nature of the hurdle this country faces in trying to turn around a stalled economy and horrendous deficit. Here it is: liberal Democrat politicians have completely convinced huge numbers of their followers that our economic/fiscal mess is the result of two principal demons: 1) “the rich,” and 2) the Tea Party. The former, of course, has been a longtime liberal scapegoat; the latter is a new one.

Note that I use the word “followers.” That’s because I’m hearing from a disturbingly high number of people who apparently buy the Democratic Party line with no question whatsoever. They exhibit a remarkable, frightful willingness to act against their own interests in blind service to partisanship and ideology. It’s like a mass self-flagellation.

I’ve realized this painfully only in the last few weeks as a result of several commentaries I’ve done (USA Today, FoxNews, among others), viewed by a large portion of Americans from across the political spectrum.  In these commentaries, I tried to stick to statistics and facts.  I naïvely thought my approach would be convincing.  It was not.

Or, perhaps I should say, it was thoroughly unconvincing to followers of the Democratic Party line.  My emailing with them has been a total waste of my time.  I’ve found myself repeating numbers over and over, with no effect whatsoever.

To keep it simple here today, I’ll stick to the one factoid that I thought was irrefutable, and (my main point) which I’m finding is irrelevant to countless liberals:

from 1965 to 2009, the federal government never decreased annual spending.

As I noted in the article, seeing this for yourself is as easy as Googling “historical tables deficit,” where one can view two sources: CBO historical tables (Congressional Budget Office) and OMB historical tables (Office of Management and Budget).  These are the official sources for data on federal budgets.  In the OMB link, look at Table 1.1, titled, “Summary of Receipts, Outlays, and Surpluses or Deficits: 1789-2016.”

In my commentaries and emails, I even included hyperlinks (as I have here) to these tables, imploring people to look for themselves rather than accept my word.  I arrogantly and mistakenly thought I was providing a service to people who otherwise didn’t know these things.  Once they saw the data for themselves, I figured, they would reconsider their view.  How naïve I was.

The top 1% of income earners pay 38% of all federal tax revenue.

I can’t begin to try to recount the angry emails I got from liberals insisting that the reasons for our deficits/debt problem is not over-spending by the federal government, but greed by wealthy people who don’t pay “their fair share” of income taxes and by dastardly “racist” “terrorists” in the Tea Party.  And, yes, I actually got emails (many of them) from people insisting that Tea Party members are “terrorists.” It is astonishing to see, but it’s absolutely true that when Democratic Party officials mouth charges like this, they are immediately accepted and repeated by their followers.  It’s very dispiriting.  And to observe an American public, only 10 years removed from September 11, somehow equating Tea Party members with “terrorists” leaves me almost speechless and hopeless.

I won’t bother here responding to that particular smear, but I would like to address the charge that the rich are not paying “their fair share.”  Again, I will stick to data, and I again fear that it will make no difference among the liberal faithful.

If you Google the words “Who pays income tax?” you will find a chart (click here) from the National Taxpayers Union.  It includes these telling statistics:

As the data shows, the rich are certainly paying their fair share.  In fact, they pay the vast share.  The poorest Americans, conversely, pay literally nothing in income taxes.

If anything, the system is disproportionately titled against the wealthy.  Our “rich” are paying for the reckless behavior of politicians addicted to spending; they are subsidizing spending addicts.  And to watch those addicts blame the mess on the rich for not paying enough?  It’s obscene.

But the folks who have emailed me have the complete opposite opinion — and it is that: an opinion.  It is an incorrect opinion.  And lately, it has been aided and abetted not merely by the usual class-warfare demagogues in the Democratic Party, but by the likes of Warren Buffet and even some liberal Republican writers, who are dupes for this line of propaganda.  Warren Buffet is the Democrats’ dupe.

Let me repeat: America’s deficit/debt problem is a spending problem.  It is not the fault of rich people who pay too little income tax or Tea Party members guilty of “terrorism.”  Don’t take my word for it.  Look at the data.

My fear, however, is that the data just doesn’t matter to a huge number of blind followers.  And that’s a very serious problem for this country, a giant propaganda hurdle that may be insurmountable.