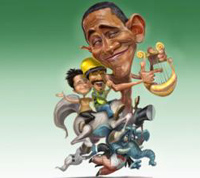 by Jeff Bergner –
Sometimes talking with liberals is perplexing. You never know what claim they will make next or what name they will call you. Take David Axelrod’s response to Standard & Poor’s recent credit action: He calls it the “Tea Party downgrade.” Amazingly, he blames the United States’ loss of its AAA bond rating on the one group that has sounded the alarm about our fiscal crisis. How did the president’s leading adviser come up with a label so detached from reality?

Comforting as it would be to dismiss this as a one-off comment, Axelrod’s words spring from the mental universe of liberalism. It is a vast sphere of assumptions that are found nowhere else. In an effort to promote the civility of debate that is so much in demand these days, here is a compendium of the myths underlying some of the strange things liberals say.

Myth #1: Conservatives are outside the American mainstream. Conservatives can’t be mainstream because it is liberals who speak for the American people. The fact that 41 percent of Americans identify themselves as conservative and only 21 percent as liberal doesn’t matter—liberals are the guardians of the genuine interests of the American people. In the liberal imagination, the political spectrum consists of left, center, right, and far right. The most conservative senators—the Jim DeMints and Rand Pauls—are far right. But notice the absence of far left. In 2007, the most liberal of all 100 senators was Barack Obama, yet you will comb the mainstream media in vain to find a single reference to him or anyone else in American politics as far left. Liberals simply define the center as somewhere near where they are and consign vast swaths of the electorate to a place outside polite society called the far right.

Myth #2: Conservatives represent special interests. If liberals represent the American people, whom do conservatives represent? They are in bed with “special interests.” Listening to liberals, you would never guess that the titans of Wall Street regularly fill the coffers of Democratic candidates, or that the pharmaceutical industry couldn’t wait to cut a special deal on Obamacare, or that well-paid public-sector union leaders regularly extract generous salaries and benefits from their Democratic allies, or that the education unions put their own interests ahead of American youth, or that Fannie Mae and Freddie Mac bask in the protection of Democrats in Congress, or that many so-called leaders of minority communities actually have few real followers but rely on liberal policies and laws for the status they claim. In fact, liberalism is one nonstop orgy of special pleading and identity politics.

Myth #3: The Republican party is moving to the right. When things go wrong for liberals, as they did in last November’s elections, and politics seems especially divisive, it is never because liberals have moved out of the mainstream. There’s only one possible explanation: Republicans must be moving to the right. But in 1980, when Ronald Reagan was elected, Republicans stood for lower taxes, less federal spending, smaller deficits, less government regulation, a strong defense, free trade, limits on abortion, and First and Second Amendment rights. Sound familiar? This is the platform of today’s Republicans. The Democratic party, however, has careened far to the left. Who in 1980 could have imagined today’s federal budget of $3.6 trillion, 25 percent of GDP? Or today’s deficit of $1.3 trillion, up from just $161 billion in 2007? Or today’s national debt of $15 trillion? Or today’s defense spending below 4 percent of GDP? Or government control of health care and automobile companies and banks? Or marriage itself redefined? Who’s kidding whom here?

Myth #4: The Tea Party is dangerous and extreme. How then to account for the erroneous belief that Republicans have moved to the right? Why, the Tea Party! It would be hard to conjure up a more ridiculous candidate for a sinister force than this generally well-mannered and pacific political movement. Indeed, there’s a good argument that by focusing on the fiscal catastrophe staring America in the face rather than on social issues, the Tea Party has actually dampened political divisiveness. One more thing. Against baseless charges of racism, Tea Party defenders have done themselves no favor by responding, “Well, yes, there are fringe elements in all groups.” At the Tea Party rallies I have witnessed, there were not a few racists in evidence, but no racists. The relatively few minorities who spoke or attended were more than welcome; they were very much appreciated. Tea Party members wish there were more.

Myth #5: Ethnic minorities must be liberals. Why then must liberals detect nonexistent racism in the Tea Party? Because they speak for the people.They assume that, as groups which have suffered historical oppression, African Americans and other ethnic minorities simply must be liberals. Otherwise, the entire liberal narrative would be at risk. That’s why it is completely acceptable for liberals to vilify conservative blacks, whom they see as traitors to their group. Liberals feel free to attack these “Uncle Toms” personally, viciously, with the zeal of one rooting out apostasy. By the same token, liberals don’t actually have to do anything to merit the allegiance of minorities. Take a look at minority joblessness, inner city schools, and social breakdown (72 percent of African-American babies born out of wedlock): These are the fruits of many decades of liberal kindness at the federal, state, and local levels. But if more minorities succeeded, liberals would lose their reason for being.

Myth #6: Women are naturally liberals. Having suffered inequality, women too must be liberals, and conservative women must be traitors to their group. It’s quite all right to call them the ugliest names. Let’s be frank: In 2010 Republicans ran some pretty rough and ready, nontraditional candidates, both men and women. Who was singled out for special derision and condescension? Sharron Angle, Christine O’Donnell, Michele Bachmann, and of course Sarah Palin, who was not even running for anything.

Myth #7: Liberals take the country forward and conservatives take it backward. Behind all these illusions lies a deeper notion: History is moving “forward,” and liberals are on the “right side of history.” But there is no intrinsic forward and backward in the historical process; there are only competing visions of America, none of which is guaranteed to succeed. If history is marching somewhere, we don’t know where. And at any given moment, the cold night of tyranny is just as possible as the clear day of enlightenment. Every step has to be won and defended on the basis of what best serves the interests of the American people. That’s why earlier generations believed that eternal vigilance is the price of liberty. And, by the way, wouldn’t it be interesting to know where liberals find the metaphysical foundations on which to rest their notions of “forward” and “backward”? Liberal orthodoxy denies a God-given moral order to the universe. Its secular “progress” is nothing but the fantasy of long-dead German philosophers.

Myth #8: Liberals have moved beyond old-fashioned religion. Speaking of religion, those who cling to it are going backwards. They do not operate in what Barack Obama has called the world of “facts and science and argument.” Liberals have resolved once and for all—in their own minds—the irresolvable claims of reason and revelation, and reason has won. Never-theless, in the real world, religion remains vital. That erstwhile paragon of the hard left, the former Soviet Union, failed to stamp out Christianity. The church is growing vigorously in China, despite Beijing’s every effort to repress and control it. The progressive liberal democracies of Europe are once again confronting the force of religious claims, this time of Islam. Liberals have not transcended religion; they are simply tone deaf to it. That’s why they fundamentally misunderstand Islam, closing their eyes to its teaching and practice in areas like marriage and women’s rights and freedom of conscience. This will not have good consequences.

Myth #9: Good intentions are enough for liberals. But accurately judging consequences is less important to liberals than moving forward. Liberal programs do not represent testable social-policy experiments to be judged by their results. They represent compassion, so their critics are heartless. Money spent on these programs cannot be wasted because they are investments in people. Liberals are to be judged by the purity of their intentions.

Myth #10: No logical arguments need be made against conservatives. For liberals there are never two legitimate sides in a debate. There are only forward and backward, good intentions and bad intentions. It is not necessary to argue the merits of an issue with someone who is pointing backward; it is enough to locate that person as pointing backward. To do so is to make the case and prove the case. The result is predictable: The essence of liberal argument is ad hominem attack. Liberals do not confront arguments directly, any more than they confront religious claims directly; they go behind conservative arguments to vilify the messenger. If you disagree with liberal policy you are a xenophobe, a homophobe, an Islamophobe, a racist, an extremist, or lately a “terrorist.” As the president has said, you are too scared to think straight. Instead of answering your arguments, liberals aim to shut you up with snarky TV entertainment shows.

A hundred years ago, the philosopher George Santayana cut to the core of this mentality. In his commentary on Goethe’s Faust, Santayana wrote of the modern liberal that “his ultimate satisfaction in his work is not founded on any good done, but on a passionate willfulness. He calls the thing he wants for others good, because he wants to bestow it on them, not because they naturally want it for themselves. Incapable of sympathy, he has a momentary pleasure in policy.” Just perfect. What this willful liberal does not admit is that decent, intelligent people who understand their own interests and understand liberal policies can still reject them.

Jeff Bergner has served in the legislative and executive branches of the federal government. He is coauthor (with Lisa Spiller) of Branding the Candidate, about political campaigns.