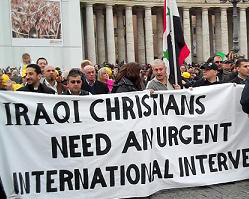 by Deacon Keith Fournier –
Last Friday, a 29 year old Christian husband and father of three children was kidnapped by Islamic militants in Iraq. A ransom of the equivalent of $100,000 US was demanded.

On Monday, May 16, 2011, his mutilated body, showing signs of extreme torture was found by a bridge. His head had been severed and his eyes had been gouged out.

The heroic Archbishop of Kirkuk, Louis Sako, praised the heroism of this Christian man and the continuing strength and faith of the Christian community in Iraq.

He strongly condemned the evil noting the growing hostility toward Christians in Iraq, “In all these years, I have never heard of a single Christian converting to Islam, despite the many threats.”

He indicated that many Muslims regularly seek to convert to the Christian faith but noted “I am not allowed to baptize them. There is no religious freedom!”

In an impassioned plea he addressed the perpetrators whom he called, “those who were capable of committing such an inhuman act”.

He asked them to consider Mr. Issa’s widow and the children that their eveil act had left as orphans noting, “If there is no human justice, sooner or later, there will be divine justice.”

The Chaldean Catholic Archbishop of Erbil, Bashar Warda told Aid to the Church in Need that the “murder was meant to intimidate Christians so that in the future they will more readily pay ransom demands.”

He indicated his strong suspicion that Islamist fundamentalists were behind the horror noting “that in some mosques hatred towards other faiths is still preached”.

However, holding a minority position is Syrian Catholic Archbishop, Boutros Moshe of Mosul. He suspects the act was committed by criminal gangs seeking to extract money.

Representatives of “Aid to the Church in Need” (ACN) are visiting Iraq to evaluate the plight of the Church. They report a growing discouragement among Iraqi Christians.

The sentiment was captured by one priest who told them, “The Muslims speak to us constantly about a ‘peaceful coexistence’, but then when something happens, violence does not seem to be condemned by Muslim clerics.”

Archbishop Bashar Warda Warda told Aid to the Church in Need that since the invasion of Iraq almost 600 Christians have been killed, 66 churches have been attacked and two convents, a monastery and a Church based orphanage destroyed.

Hundreds of Christian families fled to the north at the end of 2010 after the attack on Baghdad’s Syrian Catholic Cathedral on October 31 where 58 people were killed and more than 70 others injured.

The Church, Our Lady of Deliverance, has become a symbol of the blatant hatred of Christians among Jihadist Muslims in Iraq and the heroic virtue of the Iraqi faithful.

The faithful had gathered for Mass when terrorists invaded the Church, killed the priest and held the worshippers hostage for four hours before they were freed in a rescue mission.

In the timeless words of the early Church father Tertullian, “the blood of the martyrs is the seed of the Church.” Let us pray for the dear suffering Christians in Iraq, the land of the martyrs.