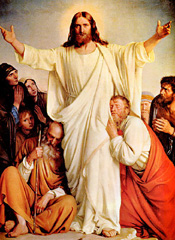 by Chuck Colson –
Can we truly live out the Christian faith if we don’t understand its foundational tenets?

Yet Jesus Himself was very clear. “I am the way and the truth and the life. No one comes to the Father except through me” (John 14:6). Either Jesus was right, or he was wrong. What Christians, Muslims, and Jews say about the person and work of Jesus Christ can’t be reconciled. They may all be false, but they cannot all be true.

It’s called the law of non-contradiction — it goes back to Aristotle: If proposition A is true — that is, if it conforms to reality — then proposition B, making a contrary claim, cannot be true as well.

If nearly six out of ten Evangelicals don’t believe the most basic tenets of the faith, it’s no wonder the Church is losing its influence over the culture. Because what we believe affects how we live.

Even a secular columnist for the New York Times understands this! As I explain on today’s Two Minute Warning video commentary, which you can watch at ColsonCenter.org, David Brooks recently wrote “The religions that thrive” historically have “communal theologies, doctrines and codes of conduct rooted in claims of absolute truth.” And those beliefs translate into acts of mercy and love: the kind that Brooks himself witnessed from conservative Christian missionaries reaching out to AIDS victims in Africa.

There is a remedy for this situation — a remedy that an Augustinian monk by the name of Martin Luther discovered back in the sixteenth century. The Church in Luther’s day wallowed in its own corruption, sold indulgences, and refused to allow people to read the Bible in their own language. Luther compared the state of the Church to the Babylonian exile of the Israelites, when God punished Israel for disobeying God and worshiping false idols.

The religions that thrive historically have theologies, doctrines and codes of conduct rooted in claims of absolute truth.

So what did Luther do? He went back to the teaching of the apostles, the faith entrusted to the saints once for all. He studied the works of the ancient Church fathers, who wrote at a time when the Church’s faith was marked by unity. He studied the early councils of the Church. In short, he recovered the orthodox faith.

This led to a Reformation that transformed not only the Church, but Western society and culture as well.

I am convinced that this is what people need to defend and live the Christian faith these extraordinarily challenging times. So I urge you to purchase a copy of The Faith — you can get it at BreakPoint.org. And by the way — all the royalties go to the ministry of BreakPoint and Prison Fellowship.

The Church needs to know what it believes, why it believes it — and why it matters.