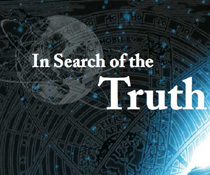 by Judith Anderson –
The answer is yes. Absolutely! Truth is what is unequivocally true. It is not constrained by ideology, creed, or spin. Crushing debt destroys families and governments. Endless, deceitful war-making destroys republics. U.S. citizens are getting a huge dose of reality as our policies in Egypt are exposed to the light. For years we have borrowed money to prop up despots in the Middle-East who are out of touch with their own people. An insistent, vocal majority of Americans don’t want ObamaCare. They are ignored by politicians who intend to impose it on them against their will. Blatant, naked truth trumps spin.

Specious, false, fraudulent argument by czars, presidents, individuals and speakers for all manner of causes are being swept away in the bright glare of reality. Spin and in some cases outright lies in matters of national security, environmental protection and government spending are failing the smell test for all but the most ardent partisan ideologue.

The 9/11 Commission confirmed what many had suspected. The towers came down because our own immigration enforcement was lax. Federal bureaucracies were not effectively tracking and monitoring visas and overstays. If they had, those nineteen terrorists would have never gotten on those planes. Bureaucrats however are not entirely to blame. Border security like every other issue is driven by policy.

Policies created behind closed doors at the service of those who can buy access from our politicians have partially destroyed the freest, most prosperous and innovative country ever.

We have spent billions on an unworkable virtual fence on our southern border. Homeland Security has dramatically increased border patrol and immigration personnel. The government even sent a handful of National Guard to the Texas and Arizona borders but the policy wasn’t changed. Arizona is sued by federal policy makers for trying to stop illegals from entering the U.S.. A known, home-grown Jhadist is allowed to stay in the U.S. Army where he mows down thirteen un-armed comrades at Fort Hood. Using borrowed, off-budget money, U.S. military with huge contingents of National Guard troops are ordered to secure Iraq and Afghanistan. Our own borders are boldly breached daily.

A policy of organizing an entire economy around “climate change” is laughable to the average American. There is nothing funny about what it is costing or the co-opting of the academic community to sell it to our children. They and the politicians are creating a phony economy, with phony money backed up by phony science and fear- mongering.

A policy of organizing an entire economy around “climate change” is laughable to the average American.

The Environmental Protection Agency’s demonizing of carbon dioxide strikes everyone but the politicians and carbon merchants as ludicrous. CO2 passes out of our lungs when we breathe and enables plants to convert carbohydrates and water to oxygen. This is the very natural and necessary process of photosynthesis. If a business exhausts this colorless, tasteless, non-combustible gas, the EPA wants to demand that it buy expensive carbon credits if they intend to continue. If you are a manufacturer you may have to shut your operation down. If your business is a power plant, power rates to the customer would “go through the roof.”

Policy makers have locked up our natural resources and destroyed so many industries that we cannot work or produce our way out of our 14 trillion dollar debt. The President and Congress are betting our mortgaged chips on green technology. The U.S. Department of Energy is the primary investor. Sixty to ninety per-cent of the manufacturing will be done off-shore. Bankrupt California, gobbling up federal dollars while it drives out productive businesses in favor of green industry, is the DOE’s green show dog.

Our government has been cleaning up the nuclear waste at Hanford for the last quarter-century. They intended to create the most sophisticated garbage disposal system in the world. It has been one failed contractor after another. Billion dollar overruns have been billed to the taxpayer. The DOE and EPA are still pulling panels of scientists and researchers together to figure out what to do. This is the essence of green “family wage” job creation.

Lots of borrowed money is spent. Expensive jobs are created. Little of value is produced.

We simple citizens get the phoniness of official logic and notice the wasteful management that accompanies every government program and project. But, why are the policy-makers doing this? Are they simply ignorant? Do they lose all judgment when they feel they are spending someone else’s money? The Founders tried to warn us about the power hungry who would likely usurp the power of government and subvert it for their own selfish interests. They counseled that limiting it’s power was the only hope of limiting it’s inevitable corruption.

our power and prestige are in the toilet since we can no longer pay our bills.

We have been taught since the 1930’s when Congress and President Roosevelt took the U.S. dollar off the gold standard to print more of it, that the dollar would henceforth be supported by the power and prestige of the U.S. Government. America’s enormous reserves of natural resources were additional collateral to secure confidence in the dollar. Unfortunately, our power and prestige are in the toilet since we can no longer pay our bills. We have no money to buy green technology even if it were viable. Our ability to mine, drill and produce are choked off by punitive regulatory fees, taxes and penalties.

We are awash in reality. Our financial future rests in Washington D.C. under the control of President Obama who believes our Constitution is flawed. In his opinion it is a document of negative rights. “It puts too many limits on government.” Americans perceive that they are no longer free to chart their own future. We are more like subjects waiting on the mercy of giant, bloated bureaucracies and a political class primarily concerned with taking care of themselves and their cronies. At home and abroad, our policy makers routinely violate principles of democratic government.

Policies created behind closed doors at the service of those who can buy access from our politicians have partially destroyed the freest, most prosperous and innovative country ever. We’ve had some warnings: 9/11, the 2008 collapse of financial markets, our borders over-run with criminals, drug gangs and scofflaws, a declining population of taxpayers left to deal with an over- whelming burden of government bailouts and handouts.

Arguing eloquently or fatuously that this analysis is wrong will not change the truth.

1 thought on “Can Truth Prevail in a Culture of Spin?”