Type “Christianity is” into Google and you’ll get a list of common searches. But the engine appears to suppress results for “Islam is.”

Type a few words into the search field on Google’s home page and the engine automatically returns a helpful list of popular, similar searches for the words you’ve typed in so far — a convenient way to find the right information. 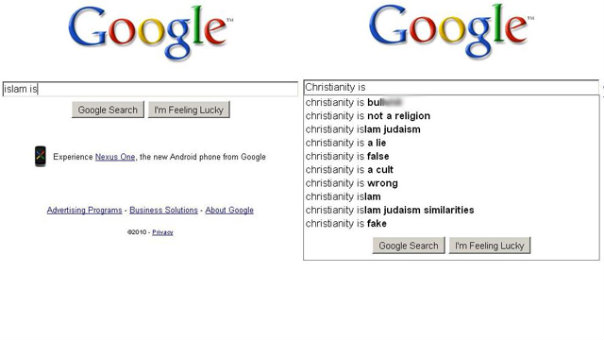 Enter “Christianity is” and you’ll find results that, while offensive, at least indicate common discussions on the Internet. Likewise, type “Judaism is” and Google suggests other, potentially offensive searches such as “Judaism is false” and “Judaism is not a race.”

But type “Islam is” into the search engine and Google’s auto-results pane mysteriously vanishes, leading some to conclude that Google, whose mantra is “don’t be evil,” is censoring its search results.

According to Google’s Web site, the query suggestions that appear as you type are drawn from from searches you’ve done (if you’re logged in), searches done by users all over the world, sites in the search index and ads in Google’s network.

The company also explains that “We try to filter out suggestions that include pornographic terms, dirty words, and hate and violence terms. If you encounter a term that should not be suggested, please let us know by posting in the Google Web Search Help Forum.”

Perhaps the returned results are so inappropriate that all results have simply been turned off, an option some Internet users label ‘cowardly.’ After all, search for hot-button items such as “scientology is” or “Muhammad is” and the results are even more offensive.

A Google spokesman explained that the weird absence of results is just a software problem: “This is in fact a bug and we’re working to fix it as quickly as we can.” But the company would not respond to requests for clarification.