The story of manmade global warming is over. In reality it never existed except in the minds and hearts of grant-seeking scientists and academics, ratings-obsessed television networks and their misinformed viewers and opportunistic eco-activists.

That said, climate change is real. The earth has been coming out of a 450-year cold era known as the “Little Ice Age” since it bottomed out in the late 1600s. Hundreds of studies have verified the existence of this cold period. The United Nations Intergovernmental Panel on Climate Change tried to erase the climate history of the last 1,000 years in its 2001 report. They replaced all the peer-reviewed studies of past climate with one that fit their needs. The now-discredited “hockey stick” graph showed virtually no significant change in temperature of the world over the last 1,000 years. Conveniently, the graph then showed a rapid and abrupt increase in global temperature during the last 100 years. This is, of course, due to our sin of burning fossil fuels and stoking the fires of global warming.

The only evidence that human activity is causing global warming comes from computer models. These models take what the people who develop them know about how the earth’s climate system works and attempt to predict the future. Computer models are not evidence. Evidence is something real, something concrete that is not subject to change. Computer models can be changed by their creator. In fact the creator of the model can make it say whatever the creator wants it to say by adjusting parameters. That is not evidence.

In 2007, a study showed the failings of computer model forecasts. The models showed that there exists a global warming “fingerprint” in the air. This fingerprint is a dramatic warming of the atmosphere, not on the ground, but 20,000 to 50,000 feet in the air above the tropics. The 2007 study revealed that real-world temperature observations by weather balloons over a 50-year period showed no global warming fingerprint at all, none. The computer models had grossly overestimated the warming over the tropics. Real world observations trump computer models. Despite this revelation the climate alarmists continued to trumpet the coming doom if we don’t change our sinful ways. To do otherwise would threaten government grants to colleges and universities, research facilities and government agencies. Large corporations are developing eco-friendly technologies to replace fossil fuels and brokerage houses are looking to cash in big time on the evolving carbon trading markets. The United Nations is looking to use climate treaties to wrestle control of carbon emissions from independent nations. This will elevate the United Nations and its leaders to the role of effectively ruling the world’s energy consumption through one world-government authority.

The greenhouse/global warming theory states that as more carbon dioxide is pumped into the air, the atmosphere’s ability to vent excess heat to space will diminish. This is the mantra of global warming alarmism. More carbon dioxide means more heat gets clogged up in the climate system and the earth gets warmer and warmer. From this we have conjured up all the various climate disasters, movies, concerts, fixes, and swindles, with their varied political and economic benefactors and victims. 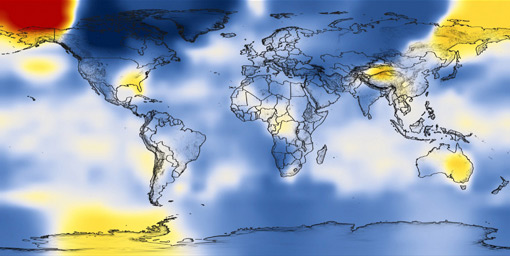 Enter 2009 and a new study by Dr. Richard Lindzen and Yong-Sang Choi from MIT that uses temperature data from satellites. As background we start with the predictions. The climate models say that as the oceans warmed by one degree Celsius from the 1980s into the 1990s, the amount of heat escaping to space would decrease. More heat would be trapped in the atmosphere, ultimately due to the burning of fossil fuels. The warming of the oceans was natural and part of the large multi-decadal temperature changes that have been known for years. Now if only we had a way to measure the amount of heat going out to space, then we could get some answers. We do, it’s called the Earth Radiation Budget Experiment Satellite (ERBE). It was in orbit above the earth measuring outgoing long wave radiation (heat) for 16 years from the mid 1980s to the late 1990s. This is very significant. Now we had a tool, and real world data, that we could compare to the computer model predictions. It is the ultimate climate system umpire.

The atmosphere compensated for the additional heat by opening the window a little more. The theory of global warming is lying on the canvas bloodied and dying. Alarmists will attempt to revive the carcass with even louder cries of impending doom and calls to repent. But this clamoring will fall on deaf ears. Science will ultimately prove the winner and the world will bury global warming in an icy grave where it belongs.