Anita Dunn, the White House Communications Director, admitted that one of favorite political Philosophers, one that she “turns to the most”, is Mao Tse-Tung, the demonic communist dictator responsible for the starvation, torture, and murder of 70 million Chinese. 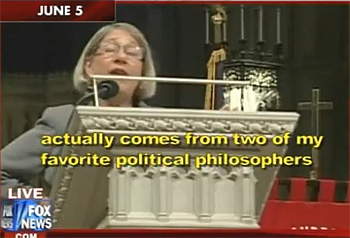 A lot of you have great deal of ability. A lot of you work hard. Put them together and that answers the why not question. There is usually not a good reason. And then the 3rd lesson and tip actually come from two of my favorite political philosophers. Mao Tse-tung and Mother Teresa, not often couple with each other, but the two people that I turn to most to basically deliver a simple point which is you’re going to make choices, you’re going to challenge, you’re going to say why not. You’re going to figure out how to do things that have never been done before. But here’s the deal, these are your choices, they’re no one else’s.

In 1947, when Mao Tse-tung was being challenged within his own party, on his plan to basically take China over, Chiang Kai-shek and the nationalist Chinese held the cities, they had the army, they had the air force, they had everything on their side and people said how can you win, how can you do this, how can you do this against all odds against you, and Mao Tse-tung said “You fight your war and I’ll fight mine.” Think about that for a second, you don’t have to accept the definition of how to do things and you don’t have to follow other people’s choices in the past. Okay. It is about your choices in your path, you fight your own war. You lay out your own path. You figure out what is right for you. You don’t let external definition how good you are internally. You fight your own war. You let them fight their’s. Everybody has their own path.