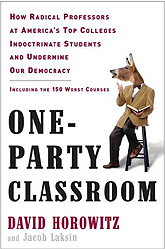 To appreciate the radical changes that have taken place in America’s universities over the last few decades one could do worse than start with the University of California, Santa Cruz. Academic courses at Santa Cruz and other California campuses are ostensibly governed by the “Standing Orders” of the university Regents. These state that each school must “remain aloof from politics and never function as an instrument for the advance of partisan interests,” and that professors must never allow the classroom “to be used for political indoctrination.” In the words of the Regents, such indoctrination “constitutes misuse of the University as an institution.”

Unfortunately, this rule and rules like it at academic institutions across the country are increasingly ignored by university professors, and almost never enforced by university administrations. The UC Santa Cruz catalog is itself littered with course descriptions that promise an indoctrination, almost invariably in radical politics and causes.

The clear goal of such courses is not to educate their students in the methods of critical thinking but to instill ideologies that are hostile to American society and its values. Contrary to the “Standing Orders” of the university Regents, these courses teach students what to think, not how to think.

The Santa Cruz catalog, for example, describes a seminar offered by its “Community Studies Department” as follows: “The goal of this seminar is to learn how to organize a revolution. We will learn what communities past and present have done and are doing to resist, challenge, and overcome systems of power including (but not limited to) global capitalism, state oppression, and racism.”

This is the outline of a political agenda, not the description of a scholarly inquiry. Moroever, the sectarian character of this course reflects far more than the misguided pedagogy of an aberrant instructor. University faculty are credentialed, hired and promoted by committees composed of faculty peers. To create an academic course requires the approval of the tenured leaders of an academic department who have been hired and then promoted by other senior faculty. To survive and flourish as a department its curriculum must be recognized and approved by professional associations that are national in scope. Consequently, the fact that a course in how to organize a revolution is taught by a tenured professor, that an academic department has signed off on its particulars, and that one of the nation’s distinguished academic institutions is granting degree credits to students who take it, speaks volumes about the contemporary university and what it has come to regard as an appropriate academic course of study.

The Community Studies Department at UC Santa Cruz is by no means alone in its radical departures from scholarly principle. The school also boasts a “Department of the History of Consciousness,” which was created in the 1960s as a platform for political radicals and as a departure from academic tradition. Communist Party stalwart Angela Davis – a onetime federal fugitive featured on the FBI’s Ten Most Wanted list – has been a faculty icon for decades. Black Panther felon Huey Newton received a Ph.D. degree from the department by submitting a dissertation that was little more than a political tract justifying his organization’s criminal activities, while another prominent radical credentialed in the program and then hired to its faculty is Bettina Aptheker, creator of UCSC’s Department of Feminist Studies.

The daughter of a famous leader of the Communist Party, Professor Aptheker was herself on its central committee for many years. Aptheker finally left the party in 1981 after her superiors rejected a political tract she had submitted for publication to the party publishing house. Her manuscript was considered unacceptable because it argued that women were oppressed because of their gender and not merely their class position.7 In a recent memoir, Aptheker explained that she agreed to pursue an academic career only after another professor and long-time Communist Party member told her, “It’s your revolutionary duty.”

In pursuit of her revolutionary goals, Aptheker devoted herself to revamping the curriculum of the newly created “Introduction to Women’s Studies” course, “making it more overtly political” and turning it into a training program in radical feminism and an adjunct of the women’s movement. “Teaching became a form of political activism for me, replacing the years of dogged meetings and intrepid organizing with the immediacy of a liberatory practice.”