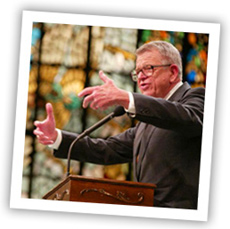 Evangelical Christianity lost one of its most eloquent and influential voices today with the death of Charles W. “Chuck” Colson. The Prison Fellowship and Colson Center for Christian Worldview founder died at 3:12 p.m. on Saturday from complications resulting from a brain hemorrhage. Colson was 80.

A Watergate figure who emerged from the country’s worst political scandal, a vocal Christian leader and a champion for prison ministry, Colson spent the last years of his life in the dual role of leading Prison Fellowship, the world’s largest outreach to prisoners, ex-prisoners and their families, and the Colson Center, a teaching and training center focused on Christian worldview thought and application.

Chuck’s life is a testimony to God’s power to forgive, redeem, and transform.

Colson was speaking at a Colson Center conference when he was overcome by dizziness. Quickly surrounded by friends and staff, Colson was sent to the Fairfax Inova Hospital in Fairfax, Virginia. On March 31, he underwent two hours of surgery to remove a pool of clotted blood on the surface of his brain. At times, Chuck showed encouraging indicators of a possible recovery, but his health took a decided turn, and he went to be with the Lord. His wife, Patty, and the family were with him in the last moments before he entered eternity.

Revered by his friends and supporters, Colson won the respect of those who disagreed with his religious and political views thanks to his tireless work on behalf of prisoners, ex-prisoners, and their families. Colson maintained that the greatest joy in life for him was to see those “living monuments” to God’s grace: Prisoners transformed by the love of Jesus Christ. And thanks to the work of Colson and Prison Fellowship volunteers across the country, there are thousands of those living monuments among us today.

The Colson family has requested that in lieu of flowers, donations be made to the Charles Colson Legacy Fund. Condolence cards may be sent to Prison Fellowship Ministries, 44180 Riverside Parkway, Lansdowne, VA 20176.

“One of the most wonderful things about being a Christian is that I don’t ever get up in the morning and wonder if what I do matters. I live every day to the fullest because I can live it through Christ and I know no matter what I do today, I’m going to do something to advance the Kingdom of God.” — Charles Colson