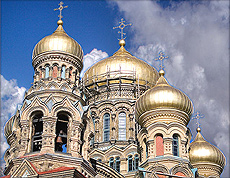 by Eric Metaxas –
Two years ago, Russian President Dmitry Medvedev announced a pilot program in which Russian public school students would be required to take classes in either religion or ethics. The plan is part of an effort to re-moralize Russia after seventy-plus years of atheistic Communist rule.

Under the plan, students would study the history of one of the four religions termed “traditional”: Orthodox Christianity, Islam, Judaism, and Buddhism. Or they could take a course in secular ethics.

The two-year trial involving twenty percent of Russia’s schools went so well that, according the Asia News, Vladimir Putin, the next president of Russia, plans to expand the program to every Russian school later this year.

No doubt another Vladimir — Lenin — would be spinning in his tomb if he learned of his namesake’s plan.

Russia’s renewed appreciation for the role that religion can play in public life stands in ironic contrast to what is going on here in the United States and the West more generally.

Here, the message is “leave your faith at the temple door,” as one British official put it. While Russian leaders want people to apply the lessons they learned from religion in their everyday lives, ours want us to disregard what we’ve learned at church.

This denuding of the public square was one of the principal subjects of the “Breaking the Spiral of Silence” conference, which I recently emceed and spoke at. The supreme example, of course, is the attempt by the Department of Health & Human Services to coerce religious organizations to pay for contraceptives, sterilization, and abortion-inducing drugs.

As Chuck has told you, groups like Catholic Charities and Prison Fellowship have absurdly been told that they can love their neighbor or they can love God, but not both. It’s a choice that no Christian should be forced to make or can make, for that matter.

The infringement of religious freedom manifests itself in other ways: religious college groups are now being forced to admit members who do not share their beliefs.

In my hometown of New York City, a federal appeals court ruled that the Board of Education may “ban worship services in the public schools on weekends or weeknights.” It upheld the Board’s policy of limiting use to groups it deems to be working for “the welfare of the community.” This is precisely the kind of discrimination prohibited by the Equal Access Act and Supreme Court decisions such as Lamb’s Chapel v. Center Moriches. Yet, we’re still fighting these battles.

What’s important to understand now is that is that these types of encroachments must be exposed and resisted. That’s why we are promoting a nationwide viewing of the “Breaking the Spiral of Silence” DVD filmed at the conference. So go to Colson Center.org for details, and please get your home group or church to join in.
Certainly the Russians understand the price associated with removing faith from the public square. The question is, do we?