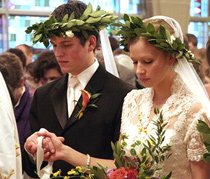 by Selwyn Duke –
The big news on the culture-war front is a federal court’s striking down of Proposition 8, California’s constitutional amendment protecting marriage.  In a two-to-one ruling, the United States Court of Appeals for the Ninth Circuit wrote, “The people may not employ the initiative power to single out a disfavored group for unequal treatment and strip them, without a legitimate justification, of a right as important as the right to marry.”

Now, I’m not sure why the judges mention a “disfavored group,” as if singling out a “favored” one for unequal treatment would be okay.  As far as I know, the 14th Amendment, on which the court based its ruling, doesn’t offer equal protection to only those the current fashions deem “disfavored.”  Thus, I think this is an example of emotionalism influencing a ruling and its language, sort of as if a judge sentenced a defendant and, adding an adjective, announced him as “stupid” Mr. Smith.  Calling a group “disfavored” is similarly a subjective judgment.  This is not the only thing the judges were subjective about, however.

Speaking to bias, some may point out here that the Ninth Circuit is the most overturned court in the nation and that the two judges who ruled against Prop. 8 were appointed by Democrats.  Yet the reality is that they’re hardly alone: virtually everyone — including conservatives — misses the 800-pound gorilla with the pink tutu and rainbow flag in the middle of the marriage debate.

The court’s reasoning is that a state cannot deny homosexuals the right to “marry” if that right has already been established for others.  This certainly seems to accord with the 14th Amendment, which reads, “No State shall make or enforce any law which shall abridge the privileges or immunities of citizens of the United States … nor deny to any person within its jurisdiction the equal protection of the laws.”  So, by the judges’ lights, since Prop. 8 abridges for one group a privilege afforded everyone else, it is unconstitutional.

But what really is the central issue here?  It isn’t whether marriage is a right or a privilege; it isn’t whether it is covered under the Constitution.  It isn’t even whether or not homosexuals have a right to “marry.”  The crux of the matter is this: what is this right or privilege?

If the court rules that there is a right to a certain thing, it must know what that thing is.  Yet if the court accepted that the thing called “marriage” is the union between a man and woman, there would be no debate.  The judges would simply state that, just like anyone else, homosexuals have a right to marry — to form that time-honored union between themselves and a member of the opposite sex.

Now, some will say the court accepts that there has been a redefinition of marriage.  If so, they had best tell us what it is.  Because, you see, our leftist marriage engineers have not redefined marriage.

They have undefined it.

They have not said that marriage is the union between any two people.  If they did, they’d render themselves just as “exclusionary” and “discriminatory” as those they decry and relinquish a hammer with which they bludgeon tradition.  They have not offered any alternative parameters for marriage.  They’ve simply implied that the correct definition — the one accepted for millennia in Western civilization — is wrong.

But the point is this: the court obviously doesn’t accept the definition of marriage embraced by most people worldwide today.  If it did, it would have ruled as indicated earlier.  Yet there also is no noted alternative definition by which to go.  Thus, it seems that before the judges could rule on the right to this thing called marriage, they’d have to rule on what this thing is in the first place.  So have they ruled that there is a right to they-know-not-what.

Of course, the judges certainly understand marriage to be some kind of legally sanctioned union between or among different parties.  But this takes in a lot of territory.  If this is all it is and everyone has a right to it, how can we deny it to polygamists (and their conception of marriage has infinitely more historical precedent than does faux marriage)?

This is where some roll their eyes and say that these things will never happen.  But while such scoffing is rhetorically effective, it’s not very intellectual.  I’ll first point out that people in the 1950s would have likewise laughed off the notion that granting homosexuals the right to “marry” would be a major social and legal movement 50 years later.  More significantly, however, ideas matter.  The precedents we set matter.  And when you undefine something, nothing is excluded.  No boundaries means no limits.

This is why the left’s actions do, in fact, threaten marriage.  To fail to respect the institution’s time-honored definition and also refuse to offer any alternative definition is to seek to destroy the edifice without a plan for what will take its place.  It is to imply that marriage can mean anything.  And if something can mean anything, it means nothing.

This is why, mind you, I would not have written Prop. 8 as its framers did: “Only marriage between a man and a woman is valid or recognized in California.” Instead, it should have been, “Marriage is hereby legally defined as a union between a man and a woman.”  The actual text gives the courts wiggle room to find in favor of currently invalid or unrecognized “marriages”; the suggested text makes it so that there is nothing else to find in favor of.  (Of course, ambitious judges can find a way around anything, but they’d have to do a bit more creative constitutional trampling.)

Yet controlling the definitions starts with controlling the vocabulary.  For a definition won’t take hold in society unless the word it defines first does.  This is why conservatives should never use the term “gay marriage,” as this is an explicit acknowledgement that such an institution exists.  Nor should they use “heterosexual marriage,” for what is the other side of that coin?

What is most readily accepted is that which is assumed.  From the get-go, conservatives should have insisted that marriage is marriage, a union between a man and woman and nothing else.  This would have put odd alien fantasies about marriage, whatever they may be, in perspective.  Because you cannot have a right to that which doesn’t exist.

6 thoughts on “How to Win the Marriage Debate”