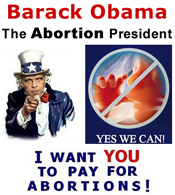 by Steven Ertelt –
It’s official. The concern pro-life organizations had about the ObamaCare legislation funding abortions has been confirmed, as the Obama administration has issued the final rules on abortion funding governing the controversial health care law.

Nestled within the “individual mandate” in the Obamacare act — that portion of the Act requiring every American to purchase government — approved insurance or pay a penalty — is an “abortion premium mandate.” This mandate requires all persons enrolled in insurance plans that include elective abortion coverage to pay a separate premium from their own pockets to fund abortion. As a result, many pro-life Americans will have to decide between a plan that violates their consciences by funding abortion, or a plan that may not meet their health needs.

The Department of Health and Human Services has issued a final rule regarding establishment of the state health care exchanges required under the Patient Protection and Affordable Care Act.

As a knowledgeable pro-life source on Capitol Hill informed LifeNews, as authorized by Obamacare, “the final rule provides for taxpayer funding of insurance coverage that includes elective abortion” and the change to longstanding law prohibiting virtually all direct taxpayer funding of abortions (the Hyde Amendment) is accomplished through an accounting arrangement described in the Affordable Care Act and reiterated in the final rule issued today.

“To comply with the accounting requirement, plans will collect a $1 abortion surcharge from each premium payer,” the pro-life source informed LifeNews. “The enrollee will make two payments, $1 per month for abortion and another payment for the rest of the services covered. As described in the rule, the surcharge can only be disclosed to the enrollee at the time of enrollment.  Furthermore, insurance plans may only advertise the total cost of the premiums without disclosing that enrollees will be charged a $1 per month fee to pay directly subsidize abortions.”

The pro-life advocate told LifeNews that the final HHS rule mentions, but does not address concerns about abortion coverage in “multi-state” plans administered by the Federal Government’s Office of Personal Management (OPM).

“There is nothing in the Affordable Care Act to prevent some OPM (government administered) plans from covering elective abortion, and questions remain about whether OPM multi-state plans will include elective abortion,” the pro-life source said. “If such plans do include abortion, there are concerns that the abortion coverage will even be offered in states that have prohibited abortion coverage in their state exchanges.”

Set to go into effect in 2014, the unconstitutional provisions found in Section 1303 of the Obamacare Act compel enrollees in certain health plans to pay a separate abortion premium from their own pocket, without the ability to decline abortion coverage based on religious or moral objection.

That provision was the subject of a legal document Bioethics Defense Fund’s Dorinda C. Bordlee, lead counsel for the group, submitted to the Supreme Court in February.

“President Obama’s healthcare overhaul includes an ‘abortion premium mandate’ that blatantly violates the conscience rights and First Amendment religious rights of millions of Americans,” AUL president Charmaine Yoest said. “Nowhere in the Constitution does it require Americans to violate their beliefs and pay for abortions.”

ADF Senior Counsel Steven Aden says Americans should not be compelled to pay for other people’s elective abortions.

“No one should be forced to violate their conscience by paying for abortions, but that’s precisely what ObamaCare does,” he explained. “ObamaCare requires that employees enrolled in certain health plans pay a separate insurance premium specifically to pay for other people’s elective abortions and offers no opt-out for religious or moral reasons. Such a mandate cannot survive constitutional scrutiny.”

He told LifeNews in an email, “Like a Russian nesting doll, the individual mandate has nestled within it a hidden, but equally unconstitutional scheme that effectively imposes an ‘abortion premium mandate’ that violates the free exercise rights of millions of Americans who have religious objections to abortion.”