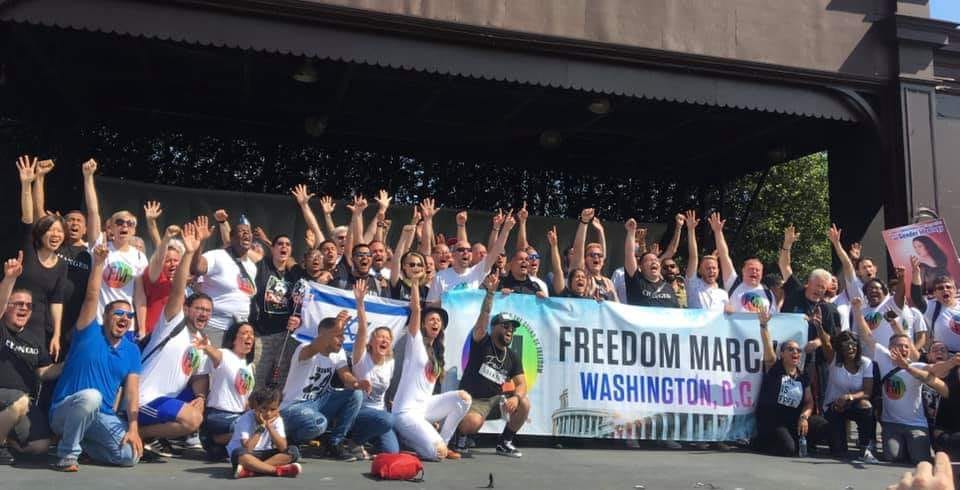 by Janet Boynes –
Millennials and Gen-Xers stood together, unified with a voice that declared freedom is possible through Christ. The message is what so many need to hear but has been so quickly shunned. It lacks popularity but is packed with power.

Jeffrey McCall, the founder of the Freedom March, invited me to be a part of this historical event. Watching so many younger than I stand unashamed and passionate about their experience of walking out of the lifestyle of homosexuality into a life of freedom in Christ was a magnificent experience. This has been an answer to prayer.

They stood together, each one with their own story of how Christ came into their heart and gave them a brand-new life. These young people were vibrant and energetic. Their enthusiasm was clearly visible as they shared their testimonies of coming out of darkness into the marvelous light of Christ. 1 Peter 2:9 says in the Message Bible, “But you are the ones chosen by God, chosen for the high calling of priestly work, chosen to be a holy people, God’s instruments to do his work and speak out for him, to tell others of the night-and-day difference he made for you—from nothing to something, from rejected to accepted.”

you are the ones chosen by God, chosen for the high calling of priestly work, chosen to be a holy people

While they had no qualms reminding me that I was part of the “older generation” and spoke of my “mothering heart,” I couldn’t help but be amazed as I watched them speak boldly and with much assurance that it was only Jesus that kept them and brought them to this point. They did not hesitate to let everyone know that change is possible, hope is tangible and love is available.

This march represented so much more than just a group of people gathering to share their thoughts. This was a march in the capital of the United States, Washington, D.C. This was a true declaration that Jesus is not dormant or dead. He is very much alive and able to change lives.

While the LGBTQ community has no hesitation in parading its doctrines and agendas before anyone, this Freedom March gave the ex-homosexual a clear voice. They were able to declare openly, right in our nation’s capital, that the lifestyle they once embraced was not God’s will for their life or anyone else’s life. They were able to freely stand up and say that they chose Christ and holiness over all of their sins.

There were no hidden agendas. Everyone was accepted. There were so many people from all cultures and nationalities. Everyone was important, no matter what titles they held or didn’t have. The love and respect for each other was so apparent. For a moment, I forgot I was 61 years old and just blended in with these young motivating marchers.

It was a true honor to be a part of this wonderful event. For this moment, every Christian had a voice. Each person in this march was speaking for so many others. The message was in the songs they sang and the messages they declared.

That is true freedom, and it is only found in our loving Savior, Jesus Christ.

The Freedom March declared to everyone that our God is not dead. He is very much alive in all of us and anyone who will allow Him to come in. No one is refused. No sin is too ugly or vile. Jesus stands with outstretched arms for everyone (Ps. 136:12). That is true freedom, and it is only found in our loving Savior, Jesus Christ.