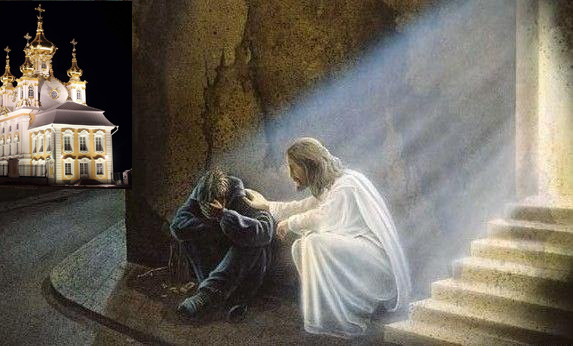 by Anonymous Orthodox –
I think those of us who have seriously struggled with SSA in the past need to speak up more and more. Never once during my SSA struggles did I ever think that “God created me this way,” since I knew that Christ loved me and it would be a cruel joke (a heartless cruel joke) for God to admonish against SSA behavior throughout Judeo-Christian history and then to create some of His sons and daughters to have innate, immutable SSA that they couldn’t do anything about. Yes, that would be a cruel joke. I also knew it wasn’t a conscious choice as in whether choosing between vanilla or chocolate ice cream. It was a significant drive for affection, affirmation, and attention.

What I eventually realized (through a lot of counseling) is that while God loves me, I could not feel it. I had a wall against feeling love, affirmation, and affection. It all stemmed from child abuse. Show me a man who struggles with SSA who has a loving relationship with his own biological father or with the significant men in his life when he was a kid, and I will show you a liar. It is no mere accident that well more than 95% of men struggling with SSA self-admit to awful relationships with their own dads. Indeed, the fathers of men struggling with SSA in turn also generally have terrible relationships with their fathers.

Never once during my SSA struggles did I ever think that “God created me this way,”

Metropolitan Kallistos may have bought into the biggest lie being perpetuated in the West — that SSA is biological, innate, and immutable. There is zero conclusive scientific evidence for this, but due to widespread propaganda and LGBT money (from the likes of Michael Huffington — the GOA should be ashamed associating with him!!), this lie is accepted as “fact” by a large majority of our population and even by unwitting church leaders. Then, they try to “be nice” to those whom they assume were “born with immutable SSA,” rather than address the real cause and really help these men.

Christ heals. We know from Holy Week that He transforms sorrow into joy.

But if you have a good therapist or priest who wants to help you feel what you need to feel and to heal — you know what happens? The pain leads to grief which leads to understanding and healing. Christ heals. We know from Holy Week that He transforms sorrow into joy. Christ gives many who struggle with SSA — who are not afraid of going down into the depths of the pit to feel their pain and meet Him there — he gives us that affection and attention that we/they are craving. He is an endless fountain of affection, love, and joy for His children who seek Him with their whole heart. For a lot more detail on healing the deep, emotional causes of SSA, I highly recommend reading “Shame and Attachment Loss.”

You see, it’s all ultimately about Christ. The young guy who was sexually abused by his uncle who is acting out sexually as a young man — he is really searching for Christ and for himself, yet he doesn’t know it. He’s numbing his pain but really needs to feel the pain of being alone and abused and helpless as a child, and to give that child the love he needed.

Our Church is so afraid of touching this topic. And it shows.

Our Church is so afraid of touching this topic. And it shows. We have Metropolitan Kallistos furthering the gay propaganda rather than challenging men to feel their pain, to cry, to grieve, to let themselves hurt, and then to meet Christ and to heal. Having been doing this for a while, my honest opinion is that it is too damn hard for most people and it brings up too much pain for them and they need help working through that pain yet they have no one to go there with them.

In California, the state assembly is very, very close to making it ILLEGAL to proclaim that Christ can empower people not to engage in homosexual practice or not to identify as “gay” or “transgender” because such behaviors and self-identities are morally wrong, or if you offer to engage or actually engage in efforts to persuade people of Christ’s power to transform in this area. If any pastor does this, they will be in violation of California AB 2943, at least so long as your advertising or efforts involved in any way an exchange of money for goods or services.

We have Metropolitan Kallistos furthering the gay propaganda

Consequently, selling religious or secular books (pamphlets, videos, audios, etc.), holding conferences, teaching courses in a college or seminary where tuition is paid, giving a speech at a paid venue, counseling people for a fee, or perhaps even posting online articles in a site that requires a paid subscription, in which it is asserted (in whole or part) that it is morally wrong for people to engage in homosexual practice or identify as “gay” or “transgender,” all could be treated as a violation of California Assembly Bill 2943.

Religious liberties lawyer David French has referred to this as “a bill that would actually — among other things — ban the sale of books expressing orthodox Christian beliefs about sexual morality.” Alliance Defending Freedom attorney Matt Sharp states: “It would be a violation if a pastor encourages a congregant to visit the church book store to purchase books that help people address sexual issues, perhaps including the Bible itself, which teaches about the importance of sexual purity within the confines of marriage between a man and a woman.”

Thus, this law is not viewpoint neutral and specifically targets psychotherapists, counselors, pastors, lay counselors, authors, speakers, and any other speakers from promoting a message of heterosexuality, and instead allows only a message affirming the LGBT viewpoint.

Every Orthodox bishop should keep and maintain a living relationship with a solid Orthodox monastery.

I don’t have much hope for Metropolitan Kallistos. He is living in a land where the “national church” is fully LGBT. It’s like trying to be a lamb in a den of wolves. His best hope is to flee to a monastery and govern his diocese from there. Living in the world as a bishop is playing with fire. Every Orthodox bishop should keep and maintain a living relationship with a solid Orthodox monastery.
_____________________________
From the Comments section of article on Monomakhos Blog by “Nice” poster. [Key words or phrases emphasized for clarity.]

5 thoughts on “Orthodox Struggling with Same-Sex Attraction: God Did Not Create Me This Way”