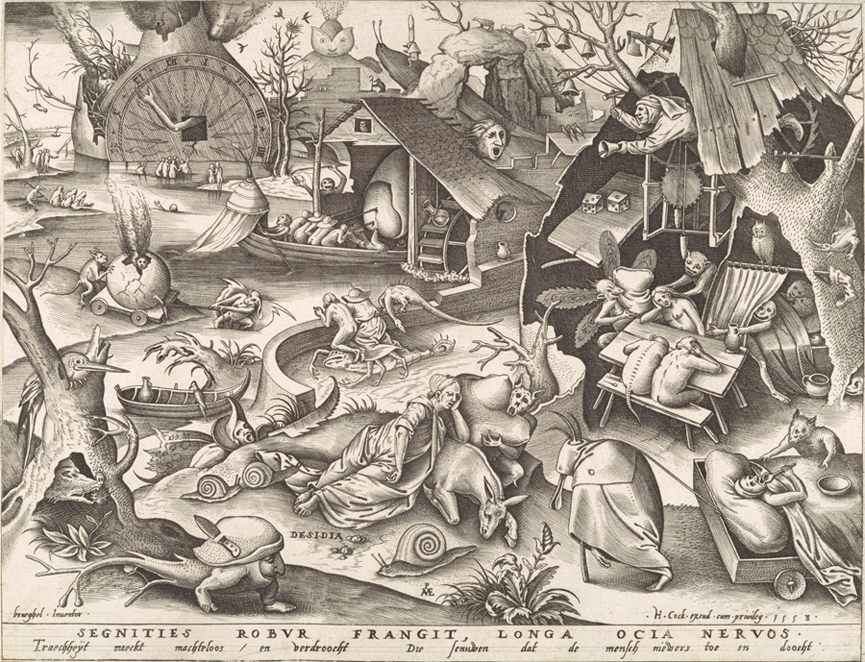 by St. Luke, Archbishop of Crimea –
“O Lord and Master of my life! The spirit of idleness give me not!” Why does St. Ephraim the Syrian begin his prayer with a request about idleness [sloth], as if there are no worse faults?

In observing idleness [sloth] from the ordinary, everyday point of view we see that idleness is contemptible, and deserves all condemnation.

Idleness is a very dangerous vice, because it is the mother of many other vices. Idle people do not concentrate their thoughts on the profound seriousness of life, the huge responsibility that lies on them not only before people, but also before God Himself.

The idle person is a harmful member of society and state. Out of their laziness idle people are incapable of working, and fall into poverty. Because they are needy they demand not only what is necessary for life, but even pleasures that exceed the limits of what is necessary—luxuries, and so forth. And in order to get money they invent various other sinful means and become capable of every low thing: shadowy business, lies, deceit, and bribe-taking.

even more destructive is idleness in spiritual life.

But even more destructive is idleness in spiritual life. We know that any of our abilities left without practice are eventually lost. If a musician who has achieved perfection in his playing abandons his music for many years he will lose that perfection. Without exercise, each organ of our body comes to a flaccid state and can’t operate. A person who always lies around loses the ability to walk. Whoever does not work with his hands brings his arm muscles to a state of flabbiness. The body’s strength wanes when physically inactive. The same can be said of the soul’s abilities. If a person does not pray he looses the ability to pray. Whoever does not watch after his spirit and heart will become dissolute in the spiritual sense.

The soul left without exercise becomes like a field that has not been cultivated for several years, overgrown with tall, useless weeds, thorns and thistles, and very hard to make fertile. Idleness of the soul, lack of practice in good deeds leads to the soul’s destruction, to an overgrowth in it of the weeds of sin.

Just the same, no matter how hard it may be this is not the worst problem. A much greater problem is that we lose days of spiritual activity—the short days of this life, given to us by God so that we might achieve a great and holy goal—to prepare ourselves for the Last Judgment. We must become worthy in God’s eyes so that He would not place us on His left side, saying, Depart from me, ye cursed, into everlasting fire, prepared for the devil and his angels (Matt. 25:41).

idleness runs away from suffering

Do you know that all the saints who, it would seem, did not need labors and dedicated the whole time of their lives to spiritual podvigs, divided the day into three parts: one part was given to prayer, another to reading the Word of God, and another to work. They were all foreigners to idleness, considering it a great and destructive evil.

The holy apostle Paul preached the whole day through, and at night he made tents.

They chose various labors: weaving baskets and mats, gardening, chopping wood, and building cells, churches, and whole monasteries. They sold their handiwork in the nearby town, and fed both themselves and the poor. The holy apostle Paul preached the whole day through, and at night he made tents. He labored diligently by the light of the moon or lamps, considering labor to be mandatory for him. His main striving was to hasten as much as his strength allowed toward the mark—the Kingdom of God. He has these remarkable words: Brethren, I count not myself to have apprehended: but this one thing I do, forgetting those things which are behind, and reaching forth unto those things which are before (Philip. 3:13–14). This is an example of life contrary to the lives of idle people.

You can’t find a trace of idleness in the life of Apostle Paul, in the lives of the eremitic [hermit] fasters, in monastic life, in the lives of great saints. They were all foreign to it, considering it a great and destructive evil. Remember that life is short, and we have to hurry like the apostle Paul to work for the Lord.