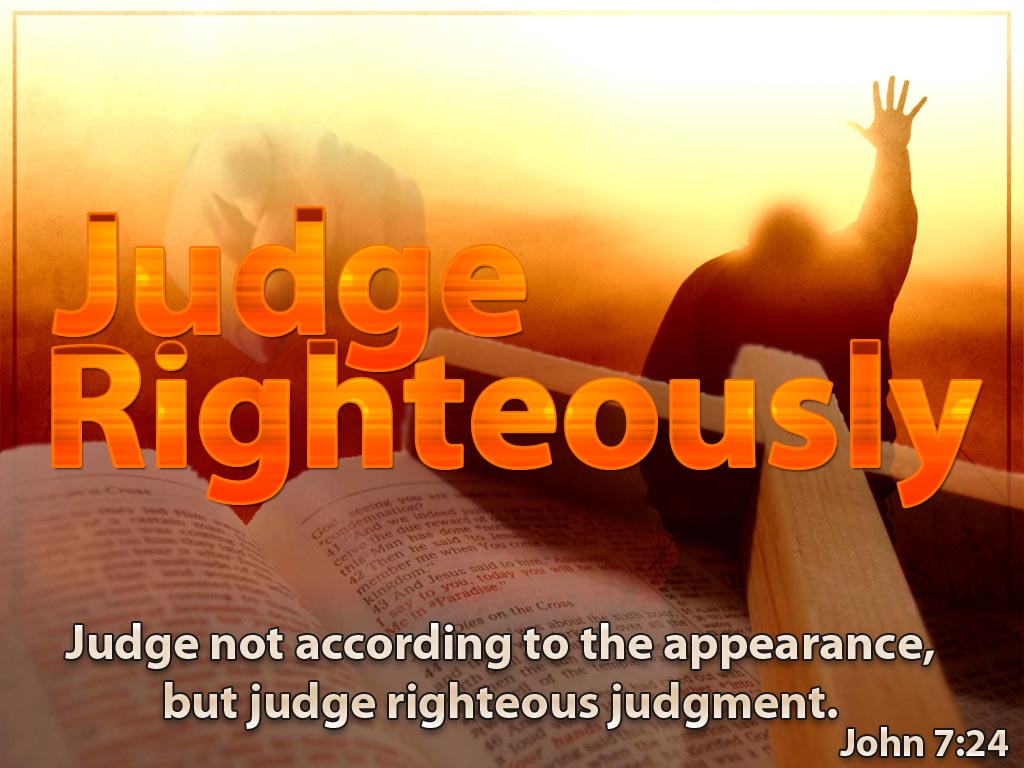 by Robert Meyer –
The idea that we can never judge about anything is patently absurd. To say that we can never judge is to wander aimlessly. The Scriptures tell us that we should reprove each other, speaking the truth in love. What our society lacks is righteous judgment. What we have an abundance of is knit-picking and indifference. Neither of those two alternatives promotes justice and righteousness.

Regardless of the level of theological sophistication, we can always be sure the critics “know” one thing: The Bible says that we should not judge one another. Anyone who would do so is clearly being un-Christian. Such obtuse reasoning is employed against Christians who offer a negative commentary on certain cultural trends, behaviors or lifestyles. Still, I wonder how many people have taken this concept to its logical conclusion?

What our society lacks is righteous judgment.

We now hear that in our modern times, John 3:16 has been replaced by Matthew 7:1, as the most often quoted scriptural passage. This is clearly because we have taken the focus off of what the Creator has done for us, and placed it on the creatures do for themselves. We have taken the emphasis off of grace, and have instead made the approval of moral pluralism the quintessential virtue of the age.

The very idea that all judging is wrong, is an illegitimate synthesis between Christianity, moral relativism, and the contemporary perspective on “tolerance.” These ideas have been wedded together to conjure up witch’s brew of self-contradictory sophistry.

Christianity has traditionally viewed “tolerance” through a prism of scriptural precept that parallels the garden variety dictionary definition. The scriptures say things like, “Love endures all things,” and “As much as it depends on you, live peacefully with all men.” The traditional definition is that “tolerance” is graciously enduring those who you disagree with.

Today, “tolerance” has been reconstructed to mean something entirely different. Essentially it means that all ideas, lifestyles and truth claims, are deemed equally valid. Christian author and speaker Josh McDowell refers to this phenomenon as “negative tolerance”(permission) versus “positive tolerance” (approval). One can readily see how this new definition of tolerance circles back to the claim made about judging. If nobody has a superior moral position, then nobody has the standing to “judge” anything in terms of ethical hierarchy.

We are exhorted to correct our own hypocrisies before reforming the world.

But does the use of Matthew 7:1, as a stand-alone quotation, bring contextual justice to the point Jesus is making? Of course not. Later in the passage, Christ refers to certain people unable or unwilling to assimilate spiritual things. He refers to them figuratively as “pigs” and “dogs.” That sounds a bit like judging to me! In the book of John, Jesus talks of rendering a “righteous judgement,” rather than none at all. The point was never that we should not make moral judgments, or employ an ethical hierarchy in being discreet about evaluating “right” and “wrong.” The idea was that there should be no “double-standards.” We should not judge others by a standard we would not want to be judged with ourselves. This is how we avoid “judgmentalism” and cronin fault-finding. We are exhorted to correct our own hypocrisies before reforming the world.

Now that is very different from telling someone that they shouldn’t dare to call anything wrong. In fact, such reasoning will ultimately lead to calling evil good and good evil. This is because evil cannot be called evil, since such labeling is judgmental. Good is considered evil, because those who are endeavoring to do good by calling something else wrong, are guilty of judging. How could any court of justice operate if all judgment without exception were considered wrong? All criticisms of anything would have to be withheld on the basis that such critiques are judgmental in nature.

we must be egalitarian in terms persons, but elitist in reference to ideas

Christian apologist Greg Koukl offers us the perfect antidote to this apparent logical dilemma. He says that we must be egalitarian in terms persons, but elitist in reference to ideas. That principle is embodied in the old ecclesiastical adage that we are to hate the sin, yet love the sinner. This is a perfect expression of “righteous judgment,” but it is a posture that would be condemned today as grossly judgmental. And yet in effect, is it any different from saying, “We support the troops, but oppose the war(We have concern for the person, but disapprove of the cause)?” The latter position is assumed to be accepted as valid without question, despite the fact that the former is seen as intolerant. Interesting paradox.

Last year an editorial writer to my local newspaper made a preposterous claim. He declared that the only hope for the peaceful co-existence of mankind, was that each of us must accept and respect the other guy’s truth. We can’t be dogmatic and say the other guy is wrong. But in articulating such a standard, the writer himself is engaged in judging, not to mention being dogmatic. Applying Koukl’s axiom to this situation, we might say that all people deserve respect because of their unique position as reflecting the image of God. But in the process of evaluating the cogency of ideas, the writer clearly is confused, as he seeks to reconstruct the term “truth,” by making it tantamount to opinion.

The idea that we can never judge about anything is patently absurd. To say that we can never judge is to wander aimlessly. The Scriptures tell us that we should reprove each other, speaking the truth in love. What our society lacks is righteous judgment. What we have an abundance of is knit-picking and indifference. Neither of those two alternatives promotes justice and righteousness.